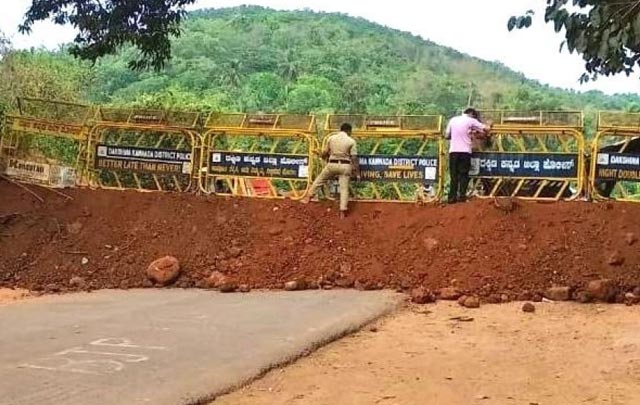 The Karnataka High Court on Friday issued notice to the Government of Karnataka and Government of Kerala on a petition filed seeking opening of the Saradka border check post in Adyanadaka village on the State Highway connecting Bantwal Taluk in Dakshina Kannada district and Manjewar taluk in Kasaragod district in Kerala.

A division bench of Chief Justice Abhay Oka and Justice M Nagaprasanna directed the governments to respond to the the petition filed by Radhakrishna Nayak J S and others, by July 29.

The plea seeks for direction to allow the ingress and egress of the residents of the villages Saya, Chavarkadu and Bagilapadavu of Enmakaje Gram Panchayat to reach Perla town, Manjeshwar taluk, Kasargod District, Kerala State and Bantwal taluk through Saradaka police check post (Adyanadaka village ) Bantwal taluk, is in Dakshina Kannada district.

The petitioners and several other residents of the above villages have to regularly visit the border taluks of Karnataka namely Sulya, Bantwal, Balthangdi, Puttur. Many of the children of these villagers are studying in the neighbouring Taluk, as higher education is available at the nearest border taluk and it is easily accessible for the residents.

By blocking the said road the respondent has completely blocked the access to the petitioners and other villagers to their own town which is located in the same state.

The Gram Panchayat Enmakaje passed a resolution dated June 10, to request the deputy commissioner, Dakshina Kannada to permit ingress and egress to the villagers of the above villages. The president of Gram Panchayat has also made several requests to the Deputy Commissioner, Dakshina Kannada requesting permission to travel through this road to reach Perla or Bantwala.

Moreover, the government of Karnataka has allowed inter state transportation after the lockdown is removed. The persons who are travelling from Mangalore to Kasargod are permitted to travel. However even after the lockdown is open the Saradkam Check post is not opened for the public to reach either Perla or Bantwala.

Due to the said action of the respondent, the petitioners and other villagers of the Manjeshwar taluk are prevented from free movement for their daily needs, education, medical facilities etc.