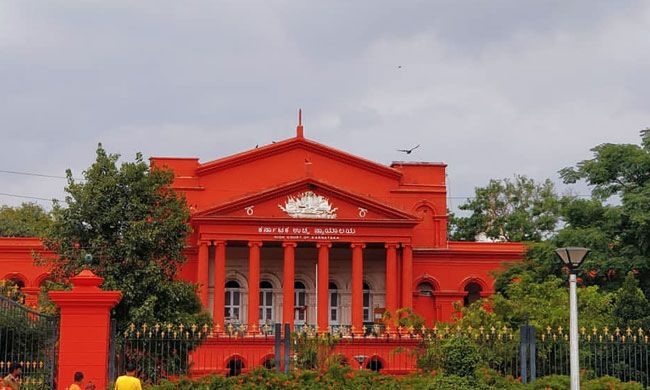 The Karnataka High Court recently laid down guidelines to be followed by trial courts to deal with injunction applications, in a pending suit, seeking relief against passing off and copyright infringement. A bench of Justice Aravind Kumar and Justice Pradeep Singh Yerur laid down the guidelines while affirming an order dated 22.06.2021 passed by the Additional City Civil and...

The Karnataka High Court recently laid down guidelines to be followed by trial courts to deal with injunction applications, in a pending suit, seeking relief against passing off and copyright infringement.

A bench of Justice Aravind Kumar and Justice Pradeep Singh Yerur laid down the guidelines while affirming an order dated 22.06.2021 passed by the Additional City Civil and Sessions Judge, (Commercial Court), Bengaluru, wherein it allowed the application filed by Cg Foods (India) Private Limited, for vacating the ex-parte interim order passed earlier and refusing to grant the relief of temporary injunction on the applications filed by ITC Limited.

The court said, "In order to make it convenient for Courts to deal with injunction applications, in a pending suit, seeking relief against passing off, we have summarized the principles which must guide the courts in the inquiry into an action for passing off."

1. In an action for passing off, the plaintiff, in essence, pleads for protection against supposed misrepresentation causing damage to his business goodwill.

2: "Get up" refers to the whole visible external appearance of the goods in the form in which it is presented to the world at large, for public consumption.

3. In most cases, the 'get up' of a certain good or service, would be composed of a variety of marks – it may include visual imagery such as device, logo, symbol, emoji, signature, colour combinations etc.; or verbal expressions such as words, phrases, slogans etc. individually or in combination. It is strongly believed that "the eye is not an accurate recorder of visual detail, and ... marks are remembered rather by general impressions or by some significant detail than by any photographic recollection of the whole. Hence, it is not every aspect/feature that the Court must take interest in. Traders may assign greater prominence to certain aspects than others in terms of shape, font and colour; some aspects are mere fanciful additions with no particular utility except to add to the aesthetic value or attractiveness of the packaging.

4. Similarity in essential features is what amounts to misrepresentation as it deceives or is likely to deceive the buyer into thinking he has purchased what he wanted, when in reality, he has purchased a different product. Similarity in unessential features, however strong, amounts to mere copying without the strength to deceive. The law of passing off does not concern itself with allegations of 'unfair copying' of this kind – it is interested in protecting the plaintiff only against 'material misrepresentation' of his goods.

5. The question of whether the defendant is liable for the material misrepresentation of plaintiffs goods can be broken down into separate questions :

The Distinctiveness of the Plaintiff's Mark - In terms of goods, what features of the claimant's goods are distinctive of him, to what extent and for what reasons?

Deceptive Similarity: Are the defendant's goods sufficiently similar in those features to be taken for the claimant's? Also, has the defendant taken other measures or are there other factors, which effectively eliminate the possibility of confusion?

This would help in filtering out the essential features from the unessential. The essential features of the get-up are those which the consuming public attaches importance, for it enables them to identify the source of the goods. The weight attachable to a particular aspect of the mark depends on the function it plays in the consumer's purchasing decisions.

6.1 The court must next study the extent of distinctiveness among the essential features of the plaintiff's goods in a relative sense. This question bears some importance, in the next stage, during the deceptive resemblance analysis. For instance, a descriptive term may be sufficiently distinctive to be protected against idle copying, but may still not enjoy the protection of such wide scope as a term that is wholly arbitrary. In respect of a wholly arbitrary mark, the defendant adopting a mark that incorporates the same predominant idea even if the expression differs may be sufficient to cause deception. This completes the first stage of inquiring into the features which can be said to be distinctive of the plaintiffs' goods.

The Court must next proceed to inquire if the defendant has adopted the essential features identified above, to such an extent, that it would lead persons of average intelligence, in that class of the public likely to buy proprietary articles of that sort, into accepting the goods of the defendants as and for the goods of the plaintiffs. For short, it may be described as the test of 'deceptive similarity'.

The Test Of Deceptive Similarity Is Inquired Into In The Following Way :

7.1 The Court must first, construct the hypothetical purchaser, who is deemed to be representative of the consumers of the goods or services in question. The hypothetical purchaser is a creation of the Court. The 'perceptive' abilities of this person are calibrated and measured having regard to nature of the goods sold, the market share of the plaintiff's goods, the circumstances of sale, the class of persons to whom the product is sold and other factors. The standard of his 'perceptive abilities' is not constant; it is a function of a balancing of multiple factors. It would be helpful to consider Solomon J's conception of the 'ordinary purchaser' in Pasquali Cigarette Co Ltd v Diaconicolas & Capsopolus while constructing the hypothetical purchaser in a given case.

7.2 The next step is to be clear of the rules governing the comparison of the marks. For this, it would be helpful to consider the combination of factors and rules discussed in the Pianotist case, the Australian Woolen Mills case and the Cadila Healthcare.

The comparative appreciation based on the rules/factors is to be made from the perception of the hypothetical purchaser constructed above. The usual manner in which ordinary people behave must be the test of what confusion or deception may be expected.

7.3 If the Court, with the eyes of the hypothetical purchaser, and having regard to the rules governing comparison of marks, finds that there is even a likelihood of deception, the test of deceptive similarity is satisfied.

8. In this sense, 'material misrepresentation' occurs when the central or prominent feature [or the "idea of the mark"] of plaintiffs goods [test of distinctiveness] is embodied in the defendant's such a way that the public may be led to believe that there is or may be a relevant connection between the two parties [test of deceptive similarity]. And as Lord Halsbury has advisedly said, though it is useful to consider 'distinctiveness' and 'deceptive resemblance' as two successive hurdles which the plaintiff must surmount, consideration of these two aspects cannot be completely separated from each other, as whether material misrepresentation is likely is ultimately a single question of fact.

The plaintiff is manufacturing and involved in sales of 'instant noodles' from September 2010, under the brand name, 'Sunfeast YiPPee!'. Under said brand different variants of noodles, including 'Magic Masala', 'Mood Masala', 'Classic Masala', to name a few are manufactured and sold. Plaintiff claimed protection from alleged misrepresentation and copyright infringement in respect of the 'overall visual appearance' (wrapper) of 'Magic Masala' variant of Sunfeast Yippee noodles.

The plaintiff alleged that the wrapper adopted by the defendant for packaging, one of its white-noodles product, 'WAI WAI Xpress Noodles Majedar Masala" is deceptively similar or nearly identical to its (plaintiff's) wrapper used for packaging 'Sunfeast Yippee Magic'.

Senior Advocate KG Raghavan appearing for the plaintiff submitted that plaintiff claims distinctiveness in the brand name and get up, in combination. He laid greater emphasis on the defendant's adoption of a similar colour scheme (red-orange) and emoji.

Senior Advocate Dhyan Chinappa, appearing for the defendant countered the submission by saying "The 'brand name' must be given greater weight in comparison to the get-up and he further submits that plaintiff cannot be permitted to lay greater emphasis on certain aspects of its wrapper for that would amount to a violation of the 'anti-dissection rule'.

The court on analysing the material placed on record and considering the submissions, noted

"The way in which goods or services are supplied has a strong influence on the probability of deception occurring. For, it is at that point of time, mostly, that the parties' respective names or marks will come to the attention of those likely to buy them. If the goods on offer are purchased from a shop assistant over the counter, they are more likely to be requested by name, therefore aural similarity becomes important."

Further, it said: "In cases where self-service is the usual mode of shopping, then get-up and visual marks assume greater relative importance but without altogether displacing the brand name. In the digital e-market world that we today find ourselves enveloped within, the 'unique' circumstances of the digital mode of shopping must be accounted for. We find it rather inconceivable, at this stage (without any data or evidence in front of us) to conclude that the hypothetical purchaser would go and ask for 'red-orange noodles'. Even if he does, it is very unlikely that a shopkeeper would straightaway handout the 'Yippee Magic Masala' brand of noodles since it has been shown to us that there are other wrappers which may though not have, strictly speaking, an identical colour scheme but have similar colours on their wrappers."

It concluded by saying, "For the above reasons, we are of the prima facie view that plaintiff has been unable to demonstrate the likelihood of deception."