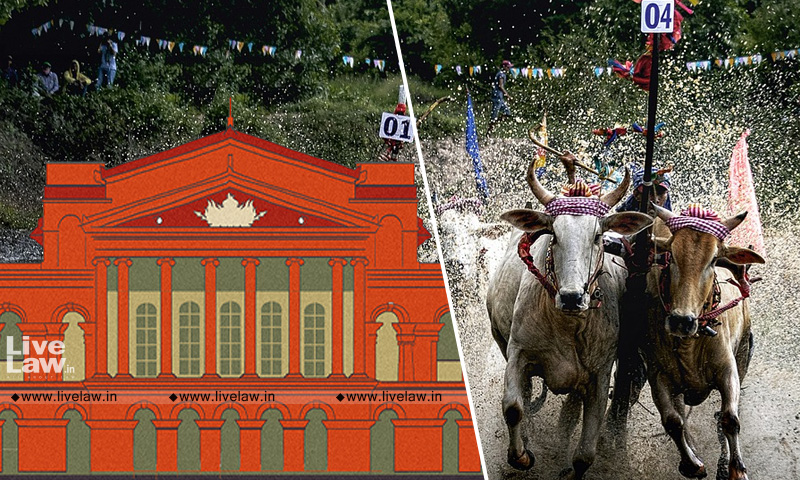 x
Court noted that the conditions laid down by the Supreme Court in the case of Shivajirao Adhalrao Patil v. State of Maharashtra & Ors. can be adhered to by Karnataka as well.

The Karnataka High Court on Wednesday allowed the State government to accord permission to hold bullock/bullock cart races, following the necessary conditions imposed by the Supreme Court. A division bench of Acting Chief Justice Satish Chandra Sharma and Justice Sachin Shankar Magadum said, "No further orders are required as statutory provisions are already in existence in the state...

The Karnataka High Court on Wednesday allowed the State government to accord permission to hold bullock/bullock cart races, following the necessary conditions imposed by the Supreme Court.

A division bench of Acting Chief Justice Satish Chandra Sharma and Justice Sachin Shankar Magadum said, "No further orders are required as statutory provisions are already in existence in the state of Karnataka for grant of permission to hold a bullock/bullock cart race. State government shall accord permission in accordance with the statutory provisions subject to the aforesaid conditions."

Petitioner, M/S People For Animals Mysuru Animal Welfare Organisation had approached the court for issuance of appropriate writ or order, directing the Respondents to not grant permissions for conducting any bullock cart races in Mandya district. Its prayer also related to quashing such permission granted in March 2021. A further direction was sought to the Animal Welfare Board, to oversee and monitor all bullock/bullock cart races, happening in the state of Karnataka.

The state government informed the court that Prevention of Cruelty to Animals Act (Karnataka) was amended in 2017, and as per amendment to Sections 2 and 28 (a), bullock cart races is permitted in the state of Karnataka and it does not amount to offence under the Act.

Further, it was stated that it is a custom and tradition which is in existence in the state of Karnataka and all necessary steps are being taken by the state government to ensure that animals are not subjected to cruelty. As regards permission granted in respect of race that was to be conducted in March, keeping in view of Covid-19 pandemic situation and other factors, the permission was withdrawn.

It said, "Meaning thereby that the Amendment Act of 2017, does permit holding of bullock cart races, as a tradition involving bulls. The constitutional validity of statutory provisions is not under challenge."

The court then referred to the judgment in Shivajirao Adhalrao Patil (SLP ( C ) 4598/2013), wherein the Supreme Court while granting permission to conduct bullock cart races in the state of Maharashtra had laid down certain parameters.

"The conditions imposed by Supreme court in case of bullock/bullock cart races, are required to be enforced in the case of state of Karnataka also, therefore this court is of the opinion that the State of Karnataka can certainly accord permission for holding bullock cart races, subject to the following terms and conditions, which have been laid down by Supreme court in the case of Shivajirao Adhalrao Patil Vs State of Maharashtra and others."

The conditions imposed by the Supreme Court were:

i) At every event, where bullock cart races are to be held, a separate track for each bullock cart will have to be provided.

iii) A veterinary Doctor who is attached to the village Dispensary shall first inspect all the bulls that participate in the bullock cart races to ensure that they are in good physical condition and they are not intoxicated and that there is no application of chilly powder or mud to the genitals of the bull to make it more aggressive or ferocious, so that it runs at a faster speed. In the event of any unfortunate injury that may occur to a bull during the race, immediate adequate medical facility would be provided by the Veterinary Doctor.

iv) In the event of any bull is subjected to cruelty by any person or persons during the bullock cart races, penal action would be initiated against him/them under the Prevention of Animal Cruelties Act, 1960.

v) The Veterinary Doctor in association with NGOs espousing the cause of animal welfare would video graph the bullock cart races from vintage position so as to enable the authorities to find out that there is an infraction of law or of the aforesaid guidelines during the course of the races.

vi) If the Committee to Monitor Animal Welfare Laws in Maharashtra constituted by the High Court desires to video graph the bullock cart races, then they would be entitled to do so and necessary safeguards and assistance would be provided to them by the Government.

vii) Any organization seeking to conduct bullock cart races would have to inform the District administration/District Collector and the concerned police station in writing at least ten days prior to holding of such race, which in turn would immediately intimate the same to the said Committee.

The High Court further directed that the District administration shall take all precautions to ensure that the animals are not tortured or subjected to cruel treatment. They shall also take necessary steps for the safety of the spectators and participants.

Accordingly, the court disposed of the petition.