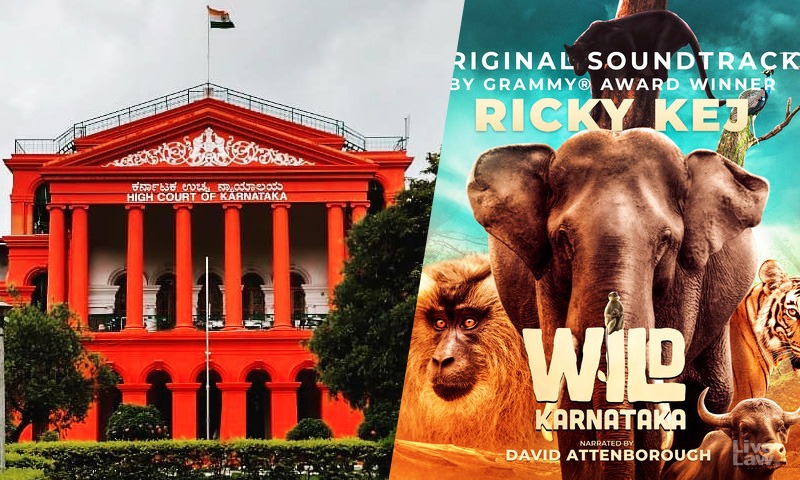 The Karnataka High Court on Monday continued its interim order passed earlier, restraining the makers of the documentary 'Wild Karnataka' from dealing with the film in any manner. The film is a 52-minute natural history documentary based on the state's rich biodiversity, which first premiered on March 3, 2019. Today, at the 67th National Film awards ceremony held in Delhi, the...

The Karnataka High Court on Monday continued its interim order passed earlier, restraining the makers of the documentary 'Wild Karnataka' from dealing with the film in any manner. The film is a 52-minute natural history documentary based on the state's rich biodiversity, which first premiered on March 3, 2019.

Today, at the 67th National Film awards ceremony held in Delhi, the Wild Karnataka documentary won two awards. The best exploration film (non-feature) award, while famous English broadcaster and environmentalist Sir David Attenborough, received a National Award for 'Best Narration/Voice Over' for the film. The awards were declared in March.

A division bench of Chief Justice Ritu Raj Awasthi and Justice Sachin Shankar Magadum posted the matter for preliminary hearing on November 17. The interim order will continue till then.

The court is hearing a petition filed by Ravindra N Redkar and Ullash Kumar RK, against alleged commercialization of the film and deprivation of Karnataka Forest Department (KFD) to its rightful share of proceeds.

The plea states: "The Public Exchequer has been cheated and deprived of Crores of Rupees worth of revenue and furthermore, the Tiger Foundations/P.A.D.F.s have been deprived of donations which would have legitimately served the cause of conservation, especially in the current pandemic when the need to protect our natural resources and maintain a clean and healthy environment is highlighted."

Advocate Vikram Huilgol appearing for the film-makers raised an objection on the maintainability of the petition submitting "Honourable Supreme Court in the case of Central Vista Project has detailed what the vehicle of a PIL was originally meant for and how that is being subverted. That is being done in this case."

He added, "if there is any dispute it is between the government and me, what the petitioner alleges that I have acted beyond the scope of the MoU entered into between me and the government, it is a purely contractual issue and in fact, the government has come forward and stated that there is no violation and we permitted you to do it."

The court by way of interim order has restrained the makers of the film and anyone claiming through them from using, publishing, reproducing, broadcasting, telecasting, marketing, selling, distributing, exhibiting or in any way dealing with the film or any part of it or the raw footage captured by them under the Memorandum of Understanding (MoU) entered between them and the Karnataka Forest Depart in November 2014.

As per the petition, the 5th to 7th Respondents (Sarath Champati, Kalyan Varma, Amoghavarsha JS), in 2014, approached the 2nd and 3rd Respondents (Principal Chief Conservator of Forest), proposing to produce on behalf of the Karnataka Forest Department a one-hour documentary film on the state's rich biodiversity. They also proposed to produce a high-quality coffee-table book with the visuals that they would capture along with the film.

The plea claims that the Respondents did not seek a waiver of filming fees nor did they seek free accommodation in the Forest Rest Houses. It was also said that they planned to approach various corporate sponsors in Karnataka in order to fund the execution of this project.

Further, the plea claims that the Respondents volunteered that it would be a non-commercial film and any revenues which would accrue, would be donated to the Tiger Conservation Fund/P.A.D.F. They also agreed that copyrights of the film solely vested with the KFD whereas the copyright of the remaining raw footage would be co-owned by the 5th to 7th Respondents and the KFD. The credits on the film and coffee-table book were to be equally given to the KFD and the sponsors.

Later, a follow-up letter dated 05.04.2014 reiterating their earlier proposal was sent and mentioned the Protected Areas where they proposed to shoot for the film and the time periods. Thereafter, by letter dated August 20, 2014, the state government granted them permission to make the film and accordingly, an MoU was signed.

The Petitioners allege that under Section 28 of the Wildlife Protection Act, 1972, it is only the 3rd Respondent who is the sole statutory authority empowered to sanction the shooting of the film inside Protected Areas. Moreover, no tender or competitive bids were called for, thus violating the provisions of the Karnataka Transparency in Public Procurements Act.

The petition claims that the MOU was drafted with a malafide intention to favour the 5th to 7th Respondents with duplicitous clauses, including the clever introduction of the term "raw footage" and separating it from the "60-minute documentary" in order to provide a fertile ground for misinterpretation and misuse by them, to secure undue financial windfall from the raw footage after capturing the same at a huge loss to the Public Exchequer.

It is also alleged that despite the MOU having expired due to the efflux of time on 23.03.2018 itself, the 5th to 7th Respondents entered into agreements with M/s. Icon Films Ltd. without the permission or knowledge of the KFD. They handed over the entire raw footage to M/s. Icon Films Ltd. to edit, produce and deliver a 60-minute film to them for delivery to the KFD.

Later, M/s. Icon Films Ltd. and the 5th to 7th Respondents executed a fresh Co-production and Distribution Agreement dated 02.09.2019, once again without the consent or knowledge of the KFD, in order to distribute the film internationally through an exclusive distributor to be appointed solely by M/s. Icon Films Ltd., states the petition.

It is also alleged that M/s. Icon Films Ltd. proceeded to execute a Distribution Agreement dated 06.09.2019 with M/s. ITV Studios Global Distribution Ltd., without the approval or knowledge of the KFD, to restrict and handicap the rights of the KFD and their ability to use the film despite being the copyright holder.

In this regard, it is stated that industry-standard geo-blocking and DRM technologies would be used to block the viewing of the film outside of India's territories on the website of the KFD. Further, pursuant to the Distribution Agreement, M/s. ITV Studios Global Distribution Ltd. has distributed the film in over 100 countries, to airlines, broadcasters, networks, channels, streaming partners, dubbed it in dozens of languages, etc, thereby fully exploiting the film and the rights granted to it. The 5th to 7th Respondents have also commercially screened the film in various theatres across India without obtaining prior sanction from the KFD, it is alleged.

Further, the plea points out that the marks of the film delivered the final master copy of the film to the KFD on 13.06.2019, almost 15 months after the expiry of the extended time period under the MOU, that too with a caveat that the film copy could be used only for the internal and offline use of the KFD and its awareness programmes only. Thereafter, the 5th to 7th Respondents handed over 320 hours and 35 minutes of raw footage to the KFD while they have voluntarily mentioned at several junctures and in different platforms that the raw footage captured by them was 400 hours out of 15,000 hours spent shooting in the field.

Hence, the remaining raw footage including the photographs captured by the 5th to 7th Respondents and their team during filming have not been handed over to the KFD and peculiarly, no demand has been raised by the KFD till date for the same.

The petition also states that Vijay Mohan Raj, IFS, the Additional Principal Chief Conservator of Forests (Working Plan), is shown as the filmmaker and the executive producer of the film in the title credits without any sanction of the Government forthcoming in violation of service rules. Vinay Luthra, IFS, who retired as the Principal Chief Conservator of Forests (Head of Forest Force) played a vital role in commissioning the entire project and waiving off the filming fees, deposit and accommodation charges and was shown as an Advisor in the title credits of the film and is currently the Chief Advisor of the 9th Respondent and the 7th Respondent is the Managing Director of the 9th Respondent.

The Petitioners claims that after the release of the film, once the KFD started becoming aware of the scale of the alleged scam and the illegalities being perpetrated by the respondents along with their accomplices, the Principal Chief Conservator of Forests (Publicity and ICT) prepared a scathing Report dated 15.04.2020 categorically setting out the illegalities perpetrated and he suggested several measures to be taken in the matter. Despite the KFD itself arriving at a conclusion that police complaints must be filed in the matter, that audits must be conducted by the Principal Accountant General (Economic & Revenue Sector Audit), Bangalore and the 5th to 7th Respondents must be blacklisted with other Forest Departments being warned amongst other punitive measures, no action has been taken in the matter deliberately right from 2019.

The petition prays for directions to initiate punitive action against the respondents in terms of law pursuant to the enquiry report filed by a Court-appointed Committee. It also seeks restoration of all profits to the Tiger Conservation Fund/P.A.D.F.s. Further, the petitioners seek to restrain in perpetuity the Respondents from dealing with the film in any way.