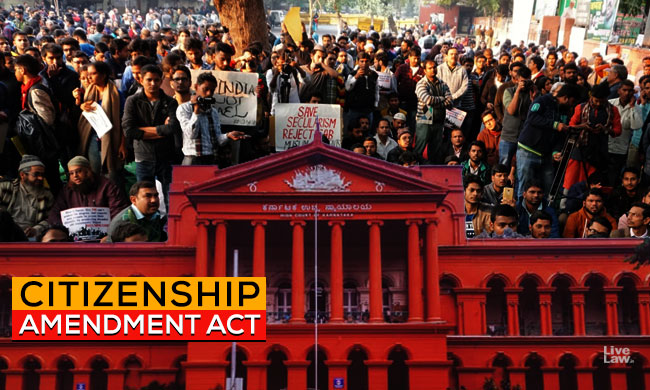 The Karnataka High Court has agreed to hear tomorrow a bunch of petitions challenging the curfew orders imposed in Bengaluru in the wake of protests against Citizenship Amendment Act.A member of Parliament Rajya Sabha, Rajeev Gowda and Member of Legislative Assembly, Sowmya Reddy, have moved the Court, challenging the order issued by the Police Commissioner, under section 144...

The Karnataka High Court has agreed to hear tomorrow a bunch of petitions challenging the curfew orders imposed in Bengaluru in the wake of protests against Citizenship Amendment Act.

A member of Parliament Rajya Sabha, Rajeev Gowda and Member of Legislative Assembly, Sowmya Reddy, have moved the Court, challenging the order issued by the Police Commissioner, under section 144 of CrPC,  prohibiting any form of gathering in groups of five or more people to conduct any procession or assembly. The orders were issued on Wednesday night  ahead of the Anti Citizenship Ammendement Act, protest, which were scheduled in Bengaluru, on Thursday.

When the petitions were mentioned before a bench of Chief Justice Abhay Oka and Justice Pradeep Singh Yerur today morning, it agreed to hear the matters tomorrow.

The petition filed by Reddy, through advocate, Pradeep Nayak of Keystone Partners, states :

"The petitioner is aggrieved by the arbitrary, capricious and mala fide exercise of power by the Respondent No. 2 (Commissioner of Police) herein, in issuing the Prohibitory Order bearing No. S.B./GuVa/Nishedhagnye /50/2019, dated 18.12.2019,in his capacity as Additional District Magistrate imposed under Section 144(3) of the Criminal Procedure Code1973 ('Impugned Order')."

It adds that several groups in Bengaluru were desirous of peacefully assembling in public spaces in the city, in order to demonstrate and air their grievance against the CAA. Such gatherings, protests and demonstrations were planned as soon as the Citizenship Amendment Bill, 2019 ('CAB') was slated to be introduced before the Lok Sabha on 9 December 2019. These protests, dharnas and other gatherings were extremely peaceful and had caused no damage to the life, limb or property of the residents of Bengaluru. Such protests are instrumental in individuals expressing dissent against the patently discriminatory and unconstitutional provisions contained in the CAA and in voicing their demand for secularism, the petitioner stated.

The impugned order prohibits any assembly of five or more people, in any public space in the whole of Bengaluru and thus takes away the cardinal right to peaceful assembly as enshrined in Article 19(1)(b), argued the petitioner.

It is contended that the Impugned Order is wholly mala fide, disproportionate, excessive as it imposes a complete prohibition on any form of protest, demonstration, dharna, celebration in the city. The Impugned Order has been passed with the sole and mala fide intention of completely stifling democratic process and annihilating the expression of any form of legitimate dissent by individuals.

The plea filed by Rajeev Gowda MP through Advocate Vishwajit Sadananda says that petitioners have the right to protest and assemble peaceably which is protected under Article 19(1)(a) and (b) of the Constitution of India and the impugned order is violative of the same, without being a reasonable restriction permitted under Articles 19(2) and (3) respectively. That the fundamental freedoms recognized under Article 19 are not only constitutional rights but have in fact been recognized as natural rights, inherent in the status of a citizen of a free country. It adds :

"That the impugned order is an attempt on the part of the respondents to gag the mouths of those who seek to express their opinions and that is against the ethos of a free democracy."

By way of interim prayer the plea seeks directions to stay the operation of the order, in the interest of justice and equity.