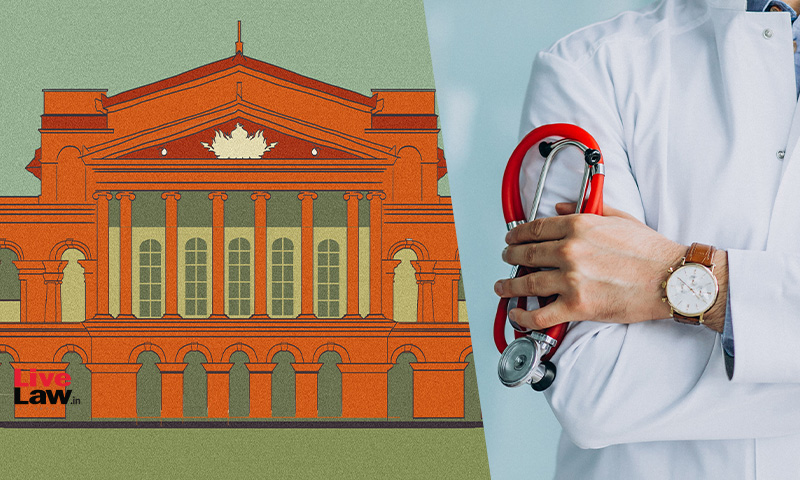 The Karnataka High Court has upheld the notification dated June 25, 2010 issued by the Union Ministry of Health and Family Welfare by which it de-recognize all the "Vaidya Vidwan" certificates awarded by the Andhra Ayurvedic Parishad from 1975 till 2010 as invalid. A division bench of Justice S.Sujatha and Justice Ravi V. Hosmani while dismissing an intra-court appeal filed by a batch...

The Karnataka High Court has upheld the notification dated June 25, 2010 issued by the Union Ministry of Health and Family Welfare by which it de-recognize all the "Vaidya Vidwan" certificates awarded by the Andhra Ayurvedic Parishad from 1975 till 2010 as invalid.

A division bench of Justice S.Sujatha and Justice Ravi V. Hosmani while dismissing an intra-court appeal filed by a batch of petitioners said,

"Fixing the validity period cannot be construed as deletion of the qualification as contended by the appellants but is a declaration that the Vaidyavidwan course shall be a recognized medical qualification only for the specified period prescribed. The said power is vested with the Central Government under Section 14[2] of the IMCC Act whereby the Second Schedule would be amended by issuing notification in the Official Gazette."

They had approached the court challenging the notification dated 25.06.2010 issued by the Central Government exercising the powers under Section 14[2] of the Indian Medicine Central Council Act, 1970 ['IMCC Act' for short] so far as it relates to Entry-2, inter alia challenging the action of the Board in cancelling the registration certificates of practice of the appellants vide order dated 18.09.2013 regarding the course of Vaidyavidwan.

The petition came to be dismissed by the single judge bench vide order dated December 17, 2020. Following which they filed an appeal.

Advocate Balasubramanya B.N appearing for few petitioners submitted the amendment purported to be made in exercise of the powers under Section 14(2) of the IMCC Act is an administrative act, not a legislative act. Hence, the considerations for challenge of the legislative amendment, such as existence of legislative competence or presumption of constitutionality etc., do not apply.

Further he said that executive has no power to amend the schedule when the legislature did not intend to specify a "validity period" for the recognition of the medical qualification. The executive bringing the amendment to the heading of the column by substituting the words "validity period" in place of the words "remarks" is without authority of law."

It was also argued that in terms of Section 14(2) of the IMCC Act the power is given to the Central Government to amend only to add to the list of recognized medical qualifications in the II Schedule and to specify any particular validity period when granted after a specified date. Referring to Section 21(4) of the IMCC Act it was said that the provision ought to have been invoked for withdrawal of the recognition. In the absence of any factual basis on the strength of which the respondents have taken the decision to restrict the validity period of Vaidyavidwan qualification between 1923 to 1975, the same is without authority of law and suffers from non-application of mind.

When a degree stands legally conferred on the appellants/practitioners, the same shall be treated as a recognized degree, the counsel added.

Advocate Manasi Kumar appearing for the Central Council Of Indian Medicine (CCIM) justifying the impugned notification dated 25.6.2010 and the orders impugned submitted that the Central Government had competency for invoking Section 14(2) of the Act of 1970 to specify the validity period.

Further it was said that Schedule II to the IMCC Act recognized some of the old medical qualifications awarded in different States of India under different enactments with a view to protect practitioners in different States who obtained the degree/certificate prior to implementation of the IMCC Act. In order to ensure that the old courses are not continued by the institutions which would defeat the object and purpose of the IMCC Act, 1970, it was deemed necessary to give a validity period.

It was added that IMCC Act of 1970 being a special enactment, enacted by the Parliament, prevails over the State enactment.

Finally it was argued that the ground of challenge is vague. Mere hardship or inconvenience caused to the appellants would not be a ground for challenging the validity of the notification issued by the competent authority exercising the statutory power conferred under the Act. The appellants are denuded to practice as the certificates said to have been issued by the Parishad from 1976 appear to be fake, which has been analysed by the Board.

Advocate Sumana Baliga appearing for the Karnataka Ayurveda & Unani Practitioner's Board said that no writ petition is maintainable since the appellants have not availed the statutory remedy of appeal under Section 17(4) of the Act of 1961.

The bench noted the registration of practitioners on the Central Register of Indian Medicine and Homeopathy will ensure that medicine is not practised by those who are not qualified in these systems, and those who practise observe a code of ethics in the profession.

Then referring to sections in the Act the court said, "The impugned notification does not deal with the withdrawal of recognition, on the other hand, a validity period for the recognition of the degree of Vaidyavidwan is inserted which is relevant herein. Hence, exercising power under Section 14[2] of the Act cannot be held to be without authority of law."

The bench also opined that, "Prior to enactment of the IMCC Act and constitution of Central Council of Indian Medicine [CCIM], there were different courses of Indian Medicine, prevalent in various States having variation in the duration of course, contents, curriculum and syllabus, and the nomenclature of degree or diploma. As per Section 14 of the IMCC Act, degrees/certificates granted by any University, Board or other medical institutions in India which are included in the Second Schedule of the Act are recognized medical qualifications for the purposes of the Act."

It then held, "The Central Government after consulting the CCIM, has amended Sl.No.2 to the Second Schedule inter alia including the validity period from 1923 to 1975 for Vaidyavidwan Certificate Course."

Further It was said,

"The impugned notification cannot be held to be arbitrary and violative of Article 14. It has been issued in exercise of powers conferred under Section 14[2] of the IMCC Act. By the impugned amendment in Entry 2 of Second Schedule to the Act, a reasonable classification has been created that has a nexus with the object and purpose of the IMCC Act. It is trite that hardship pales insignificance in considering the validity of a notification. Presumption is always in favour of the constitutionality of the notification."

So far as genuineness of the certificates issued by the Parishad being disputed by the Board as fake/fabricated is concerned, the Court said that these are disputed questions of facts to be agitated before the Appellate Authority. It thus upheld the liberty given to the petitioners to prefer appeal/s before the Appellate Authority under Section 17[4] of the Act, 1961 within a period of six weeks against the order of cancellation of certificates passed by the Board.