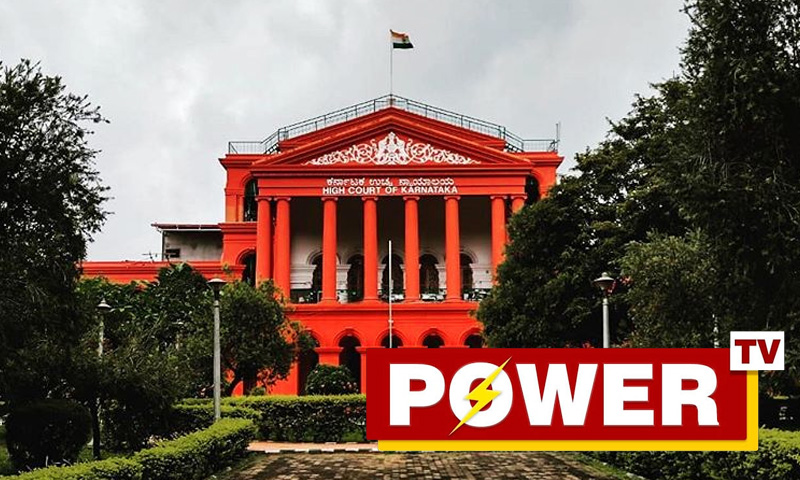 The Karnataka High Court has cited the recent order passed by the Supreme Court in Arnab Goswami's case to grant anticipatory bail to Rakesh Shetty, Managing Director and Editor of Power TV in an alleged case of extortion.The extortion case was registered by the Bengaluru police against Shetty after his channel ran a series of reports raising corruption allegations against the family of...

The Karnataka High Court has cited the recent order passed by the Supreme Court in Arnab Goswami's case to grant anticipatory bail to Rakesh Shetty, Managing Director and Editor of Power TV in an alleged case of extortion.

The extortion case was registered by the Bengaluru police against Shetty after his channel ran a series of reports raising corruption allegations against the family of the Karnataka Chief Minister, B S Yeddyurappa.

While allowing his petition for anticipatory bail in the case, a single bench of Justice B A Patil cited the observations made by the Supreme Court last week on personal liberty while ordering the release of Republic TV anchor Arnab Goswami.

"It is the duty of the Court to exercise its jurisdiction in proper way to protect the personal liberty of a citizen. If the Courts do not interfere, we are troubling the path on destruction. This proposition of law has been laid down by the Hon'ble Apex Court in its recent decision in the case of Arnab Manoranjan Goswami Vs. The State of Maharashtra & Others, decided on 11.11.2020", the High Court observed in the bail order.

The High Court also observed that the provisions of anticipatory bail enshrined in Section 438 of Cr.P.C. is conceptualized under Article 21 of the Constitution of India which relates to personal liberty and it shall be given a liberal interpretation.

It may be recalled that while granting interim bail to Arnab Goswami, Justice D Y Chandrachud had orally expressed disappointment that the High Courts are not considering bail pleas properly.

"There has to be a message to High Courts- Please exercise your jurisdiction to uphold personal liberty. We are seeing case after case. HCs are failing to exercise jurisdiction", Justice Chandrachud had orally remarked during the day-long hearing held in the case of Goswami on November 11.

"If we as a constitutional court do not lay down law and protect liberty then who will?", Justice Chandrachud had asked.

After the hearing, the top court had passed a short order for the release of Goswami, who was arrested by the Maharashtra police on November 4. The apex court said that it will pass a detailed judgment giving reasons later.

Arnab Goswami Case : 'If This Court Does Not Interfere Today, We Are Travelling On Path Of Destruction', Says Justice Chandrachud

Rakesh Shetty's channel aired a series of reports alleging corruption by members of the Chief Minister's family in awarding a work tender of Bangalore Development Authority. The reports were based on the allegations made by one Chandrakanth Ramalingam, a director with Ramalingam Construction Company Limited.

Later, Ramalingam lodged a complaint with Bangalore police alleging that he was coerced by Shetty to make the allegations.

While granting bail, the High Court observed that the antecedents of the complainant must also be considered.

"It is true that autobiography and antecedents of the accused must be seen while considering the bail application, but at the same time autobiography and antecedents of the complainant must  also be seen. Court has to put the facts of the case of the complainant and accused into a scale and weigh it to ascertain the truth. Complainant who is before the Court has also not come up with clean hands and it appears that all is not well. In that light, I am of the considered opinion that in order to ascertain the truth, a fair and unbiased investigation is necessary"

The High Court said that bail can be allowed on "stringent conditions". The Court asked him to cooperate with the investigation and furnish a bond of Rupees 2 lakh.

Earlier, the High Court had dismissed the writ petition filed by him to quash the FIR. However, the Court directed the City Crime Branch(CCB) to give Shetty access to his social media accounts in YouTube and Facebook, after downloading and storing the incriminating data.

"...an investigating agency cannot retain the user name and password of social media/digital platform like Facebook and YouTube pending investigation, the investigation agency can download the data required from such account and thereafter has to give back the changed credentials to the person who owns the said social media", observed a single bench of Justice Suraj Govindraj.

The Court also allowed Shetty to seek the return of the electronic equipments, laptops and hard disks seized by the CCB.