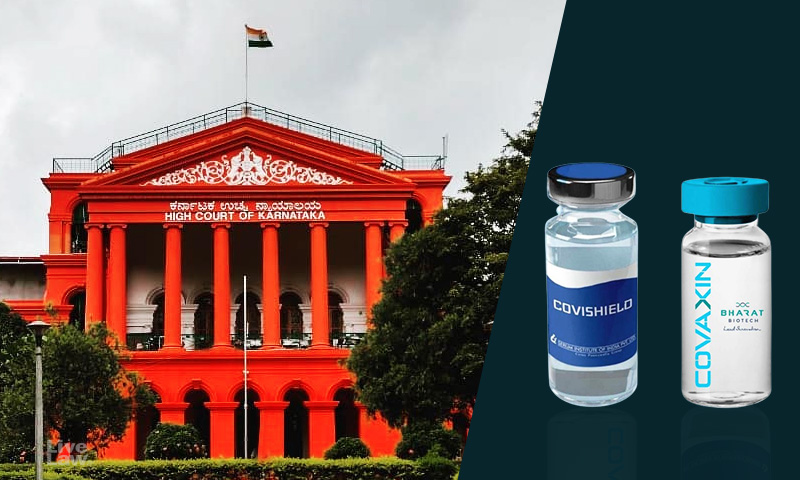 The Karnataka High Court on Thursday observed that not giving second dose of COVID-19 vaccine will be a violation of fundamental right to life under Article 21 of the Constitution.

The Court in its order said "Once dose is due it is the obligation of the state government to provide the second dose. If a second dose is not provided, it will be a violation of fundamental rights of citizens under Article 21."

Further it said "This is a fit case for issuing a mandatory direction to both the government to ensure that sufficient quota of vaccines is procured which will ensure that all those persons to whom second dose is due get the second dose."

The Court also said that the State government should go before the public and tell people the truth about the availability of vaccines in the state.

The observation was made after the court noted that the State government has a total stock of 12,32,960 doses of vaccines remaining (inclusive of both Government of India quota and state procured) as of today. While in its order of May 11, it had recorded that 26 lakh beneficiaries need second doses and with addition of around 5 lakh frontline and health workers today, a total of 31 lakh beneficiaries require second dose of vaccine.

The court also urged the Central Government to bridge the gap in the shortage of vaccine at the earliest to prevent wastage of National Resources. Additional Solicitor General Aishwarya Bhati assured the court that every endeavour would be made by the Government of India to ensure that people who have got the first dose of vaccine are given the second dose within stipulated time period.

It also recorded that "As noted in the earlier order of May 11, a total of 65,83,687 beneficiaries had taken the first dose as on May 5 and were awaiting second dose. The figures as of today must be much more than 65 lakh. Therefore, the figure of overdue second dose of 19,97,729 beneficiaries as of today will not remain static and every day a few lakh numbers will be added to the said figure."

ASG Bhati also brought to the notice of the court about three letters written by the Central government to all states for efficient use of vaccines. It was informed that as per letter dated May 6, it was specifically laid down that state governments were advised to use allocated vaccines provided by the Central Government in a 70:30 ratio, for second dose and first dose respectively.

She also informed the court that an expert body of National Technical Advisory Group on Immunisation in India (NTAGI) is looking into the question of what happens if timelines for getting a second dose are not followed. The report of the expert committee is expected in a few days. As of today the second dose of Covaxin is recommended after 4 to 6 weeks while Covishield is after 6 to 8 weeks of the first dose.

Following which the court said "We have already held that the Right to health is an integral part of Article 21 of the Constitution of India. As a part of right to health, central govt came out with policy of vaccination. If those who have taken the first dose are not administered second dose as per timeline prevailing today. Apart from violation of fundamental rights under Article 21, if they are made to take the first dose again it will be a national waste of resources."

Further it said "This is a fit case for issuing a mandatory direction to both the government to ensure that sufficient quota of vaccines is procured which will ensure that all those persons to whom second dose is due get the second dose."

It added "In normal course we would have had no option but to pass such a direction. However, ASG states that a decision on allocation of vaccines in the second fortnight of May will be taken tomorrow. She states that if the state government immediately furnishes entire district wise data of persons to whom second dose is overdue and to whom it is likely to be overdue in excel sheets. The central government will make every endeavour to bridge the gap. It is in this light that we are not issuing any mandatory directions."

The court also noted that "It is absolutely necessary for the state government to abide by the guidelines issued by the Central government, as the desperate situation created in the state as of today can be avoided in the future." It added "It is mandatory for the State government to have a rational and fair formula for giving a second dose."

Vaccine Priority for persons with disability.

In its order it said "State has produced on record guidelines. Going by facts and figures on record and considering the situation which prevails today and guidelines of the Central government. Though it is very unfortunate, whatever vaccines available will have to be used for giving the second dose. Today, we are not in position to issue any direction. However, steps taken at district level shall be placed on record by the state government on May 19".