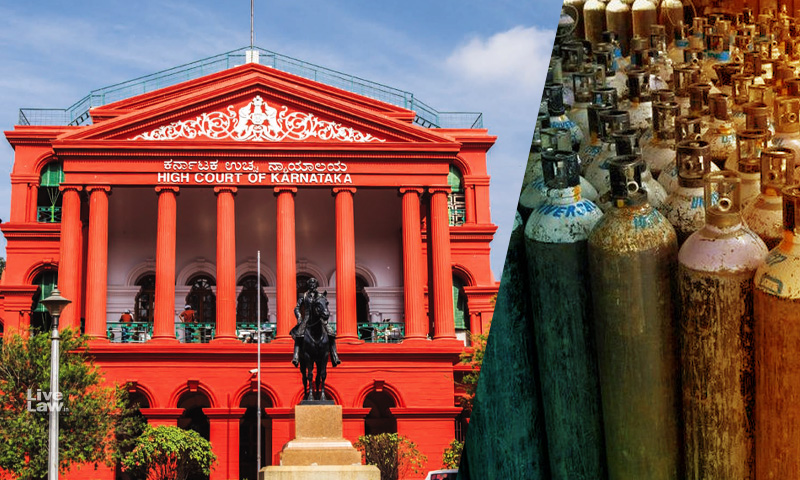 The Karnataka High Court on Wednesday directed the Government of India to immediately increase the cap on allocation of liquid medical oxygen to the state of Karnataka to 1200 MT per day, from the sanctioned allocation of 965 MT. Taking note of the grave situation created by the COVID pandemic in the state, a division bench of Chief Justice Abhay Oka and Justice Aravind...

The Karnataka High Court on Wednesday directed the Government of India to immediately increase the cap on allocation of liquid medical oxygen to the state of Karnataka to 1200 MT per day, from the sanctioned allocation of 965 MT.

Taking note of the grave situation created by the COVID pandemic in the state, a division bench of Chief Justice Abhay Oka and Justice Aravind Kumar directed :

The court reminded the government of India to act immediately it said "The reason being there are a number of reported incidents in the state of death of covid-19 affected patients due to lack of availability of Oxygen. For upholding rights under Article 21 of Constitution this is the minimum requirement to be complied with by the state."

The court also directed the Central Government, considering the gravity of the situation in the state of Karnataka, to allow the state government to lift oxygen which is manufactured in the state.

"Members of the bar had pointed out to the court that considering the gravity of the situation, the State of Maharashtra was allowed to utilize the oxygen generated in the state", the Court noted in the order.

On May 4, the High Court had directed the Central Government to reconsider its decision and increase the cap on allotments on supply of Oxygen to the state. Additional Solicitor General M B Nargund had in the morning session today informed the court that 865 MT already allotted to them (Karnataka) and out of which 755 MT is being lifted by them. The bench had taken strong exception to it and had noted that requisition made by the Government of Karnataka on April 30 had asked for more oxygen than what is allocated. Following which the Additional Solicitor General had said he would persuade the authorities and respond in the afternoon session.

Accordingly, it was informed to the court that the cap on supply of oxygen has been increased by 100 MT from 865 to 965 MT per day for the state of Karnataka.

In its order, the bench noted that the statement made in the requisition made by the state of Karnataka to Government of India is that the minimum requirement of the state as on May 5, will be 1162 MT per day. As against this, oxygen supply to the state on April 30 was 802 MT which was marginally increased to 865 MT from May 1. Today, the ASG stated that it has been increased to 965 MT per day.

The court said "It is not the case made out by the Government of India that the requirement stated by the state government is on the higher side. The estimation made by the state government as on April 30 is not disputed by the Central government. As noted earlier the estimation is that the minimum requirement is 1162 MT per day, as on May 5, based on active cases of 3.95 lakh. Since the active cases as on May 4 have increased to 4,64,363 cases, it can be a justification for demanding more than 1162 MT per day as cases have increased."

During the hearing the court also asked the central government about why there is no buffer stock of oxygen created even after the Supreme Court directed for creating the same. It noted that the incident that which occured in Chamarajanagar could have been avoided if there was a buffer stock of oxygen.

In its order the court said "Scenario that emerges is such that notwithstanding the facts and figures, not only no buffer stock is created for the state of Karnataka, but minimum requirement is also not met with. We must note here that Bengaluru city has had the highest number of cases in the country for the last several days."

The court also recorded the statement made by the Advocate General Prabhuling K Navadgi that state has been finding it challenging to lift oxygen supply from Vishakapatanam and Orissa. Accordingly, the entire quota allotted is not lifted by the state government.

The court also took on record a memo filed by Advocate Venkatesh P Dalwai informing about the press releases issued by the Prime Minister office about a decision taken by the Prime Minister Narendra ordering setting up of 551 oxygen plants inside government hospitals across the country. PM CARES Fund will provide financial aid in setting up these plants.

The bench said "As rightly pointed out by the counsel for the petitioner this will be a very crucial step in preparedness to face waves of Covid-19." It directed the State government to respond to the same by next week.

The bench noted that as regards the quota for supply of Remdesivir, the state government is hardly getting 1/3 of its requirement. Following which the ASG Nargund informed the court in two days a decision will be taken by the Central government for increasing the quota of the drug for the state.

The bench said "Considering the gravity of the situation in the state, we hope the Government of India will take a positive decision within two days."

The court said considering the fact about the increasing number of cases reported in different districts of the state. It is necessary to provide a helpline number to the citizens as is made available in Bengaluru urban district.

As the number of positive cases in districts are on the rise the state government will have to come out with criteria for making available beds for each category in different districts.

The matter will be next heard on May 6.