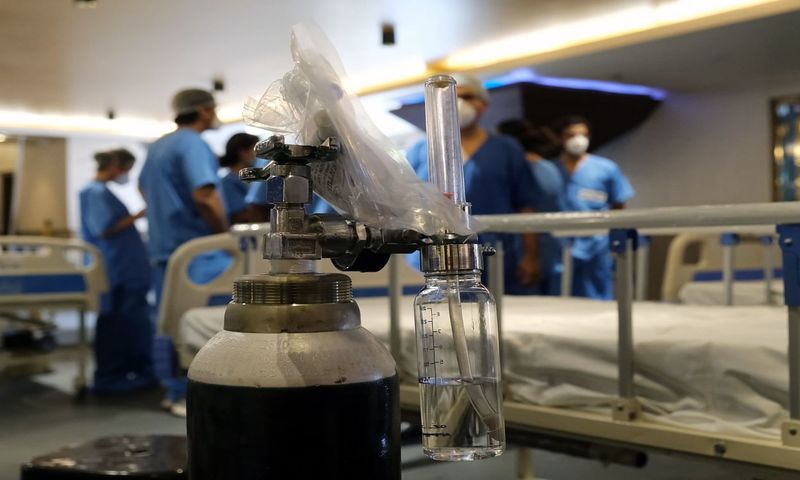 The State Government on Thursday informed the Karnataka High Court that it has decided to pay an ex-gratia compensation of Rs 2 lakh to the families of the 24 victims who died at a Covid hospital in Chamarajanagar due to shortage of supply of Oxygen. Advocate General Prabhuing K Navadgi said "State government has decided to pay ex-gratia compensation of Rs 2 lakh to families of...

The State Government on Thursday informed the Karnataka High Court that it has decided to pay an ex-gratia compensation of Rs 2 lakh to the families of the 24 victims who died at a Covid hospital in Chamarajanagar due to shortage of supply of Oxygen.

A division bench of Chief Justice Abhay Oka and Justice Aravind Kumar accepted the said assurance and said "We hope and trust the assurance is acted upon immediately." It added "However, the issue of whether there were only 24 deaths due to lack of oxygen or there were more deaths and adequacy of compensation will have to be gone into."

The decision followed after the High Court had on May 13, put the state government to notice that on the next date it would consider the issue of granting compensation to the family members of the 24 people who died at a Covid hospital in Chamarajanagar due to shortage of supply of Oxygen.

The court had said, "The State government will have to take a stand on the issue of compensating families of the victims. It is needless to add that right from the decision of the Apex court in case of Rudul Sah vs state of Bihar (1983) and followed by judgment in the case of Smt Nilabati Behra alias Lalit vs State of Orissa (1993) and various decisions rendered subsequently, which hold that while dealing with a petition under Article 226 of the Constitution of India. Writ court can grant compensation for violation of fundamental rights guaranteed to citizens under Article 21 of the Constitution. We put the state to notice that the question of granting compensation will be considered on the next date."

Earlier, the court had appointed the committee of Karnataka State Legal Services Authority (KSLSA) constituted to monitor covid-19 issues to conduct an inquiry and place a fact finding report before it about the incident.

The committee headed by former Judge of the High Court A N Venugopal Gowda has said "The Committee is of the considered opinion that all the 24 deaths which have occurred on 2nd and 3rd of May in the hospital are attributable to the lack of oxygen at the hospital."

Further the report says that "On the request made by the Dean, Medical College, Chamarajnagar, the District Surgeon, Mysore made available 40 cylinders at 12midnight on 2/3may 2021, while 30 more cylinders were made available by southern gas agency. These 70 cylinders reached Chamarajanagar at 6.00 a.m on 3-5- 2021. The delay by at least 4 hours in reaching Chamarajanagar was due to the fact that the truck went on to collect 30 cylinders from Southern gas agencies, after collecting 40 cylinders arranged by the District Surgeon Mysore. Thus between 10.30 p.m. on 02-05-2021 till about 2.30 a.m. on 03- 05-2021 there was absolutely no Oxygen available at District 15 hospital, Chamarajnagar on account of which the patients who were on Oxygen support were deprived of oxygen."

The report also mentions that "On account of non-availability of Oxygen, many of the patients died during this period and vital parts of many other patients were badly damaged which has led to their death thereafter. The number of persons who died in the hospital between 11.00 p.m. on 02-05- 2021 and till the evening of 03-05-2021 was 37 as indicated in 33 case sheets seized and 4 case sheets subsequently made available by Dr.Murugesh, in charge District Surgeon, Chamarajnagar.

Further, it is stated that on 3-5-2021, Death Audit in respect of 24 persons who died on the night of 02-05-2021 and early part on 03-05-2021 was held by a Committee consisting of District Surgeon and four others. In the Death Audit Report, the Committee concluded that the death of 3 persons was on account of lack of oxygen, death of 7 persons was on account of Hypoxic Brain Injury and 14 persons died due to Covid – 19. The death audit in respect of remaining 13 persons is not found in the available records.

The report also states that the Dean of CIMS and the I/c District Surgeon, a Microbiologist, have not exhibited leadership quality and have failed to efficiently marshal the available resources to save human lives.

The Deputy Commissioner, Chamarajanagar has not exhibited the dynamism and the leadership qualities expected of a district head in a dire crisis situation as mentioned above. As Chairman of the District Disaster Management Committee, he has miserably failed to guide and supervise the crisis situation arising out of extreme demand for oxygen. On the contrary, he has indulged in an unsavory blame game accusing the DC Mysore of causing hindrance for oxygen supply without any basis.

The report concludes by saying "Cumulatively, the failure of the district administration in general and the hospital authorities in particular including the Dean of CIMS is apparent. A detailed probe alone can unearth the acts of omissions and commissions of the concerned individuals for fixing the responsibility."