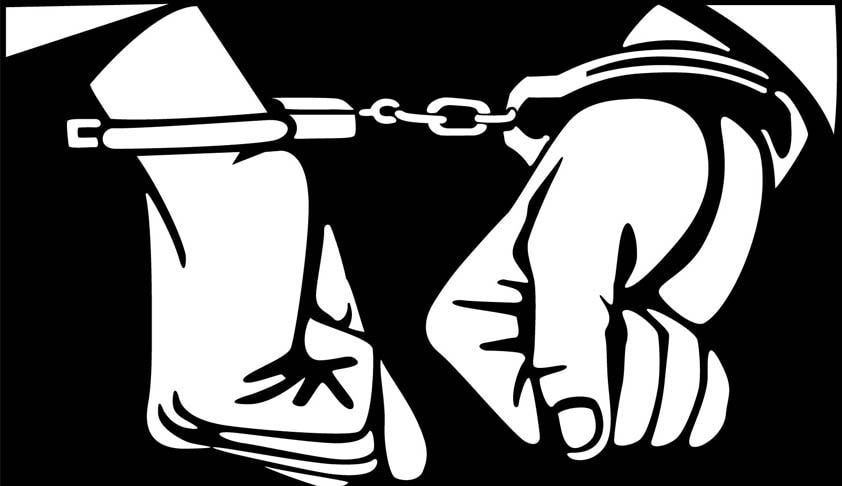 The Karnataka High Court has held that an accused who is arrested can normally not be handcuffed. It is only under "extreme circumstances", for instance where there is possibility of the accused/ under trial prisoner escaping custody or causing harm to himself or causing harm to others, that handcuffing of an accused can be resorted to.

"If there is a violation by the Arresting officer in putting handcuffs on the petitioner, the petitioner would be eligible for compensation."

The court then issued the following guidelines to be followed:

1. No person whether he be an accused, under trial prisoner or convict shall be handcuffed unless the reason for the same is recorded in the case diary and/or the relevant record as to why such a person is required to be handcuffed.

2. If any accused is produced before a Court after arrest, it shall be the duty of the said Court to, among other things, inquire as to whether the said person had been handcuffed or not. If the person were to respond in the affirmative, the Court would have to ascertain the reasons for such handcuffing and to decide on the validity or otherwise of such handcuffing.

3. If an under trial prisoner is produced before the Court, it shall be the duty of the Court to enquire as to whether he was handcuffed or not and then if the person were to respond in the affirmative, the Court would have to ascertain the reasons for such handcuffing and to decide on the validity or otherwise of such handcuffing.

5. As far as possible, permission to handcuff an under-trial prisoner would have to be taken prior to the production of the undertrial prisoner before the Court and obtain an order for handcuffing from the said Court. If no such permission is applied for and under trial prisoners were to be handcuffed, the concerned police officer would be taking a risk of such handcuffing being declared illegal and action being taken against them.

7. The Director General of Police shall also endeavour to make available body cameras to all the police officers entitled to arrest a person, so that the manner of arrest is recorded by such body cameras. The camera shall also be equipped with a microphone to record the conversations that take place at that particular point of time. The video recording as also audio recording shall be retained at least for a period of one year from the date of recording. A Standard Operating Procedure shall be prepared by the Director General of Police in this regard and suitable training to be provided to such officers.

The High Court Govt Pleader was directed to bring to the notice of the Director-General of Police and the Principal Secretary Home Department about the above observations so as to prepare a plan and complete the recruitment in a time bound manner.

The development ensued in a writ petition moved by one Suprit Ishwar Divate seeking Rs. 25,00,000 compensation for the loss of reputation, illegal detention and illegal handcuffing in connection with a bailable offence under the provision of Negotiable Instrument Act, 1881.

A non-bailable warrant was issued against the Petitioner, following which, he was paraded with handcuffs in public view. The petitioner claimed that the said incident was video recorded and a compact disc in relation thereto was placed before the Court.

The bench referred to section 46 and 49 of the Criminal Procedure Code, Sections 831, 832, 833, 834 and 835 of Karnataka Police Manual, various Supreme Court and High Court judgments and said,

"Whether the under-trial prisoners or an accused being arrested, handcuffing should be by way of last resort and such handcuffing should mainly be only for the reason of whether there is a possibility of the accused and/or under trial prisoner escaping custody, causing harm to himself or causing harm to others. The nature of offences and the punishment prescribed for the said offence are not relevant for the matter of handcuffing."

On going through the records in the petition the bench said, "Apart from the petitioner stating that the petitioner is a student of Law and that his reputation has got affected adversely by him being handcuffed, there is no other statement made or evidence produced by the petitioner to establish the nature and kind of damage caused."

"I am of the considered opinion that the said amount cannot be awarded taking into consideration that the petitioner was a student and that the arrest was made in furtherance of non bailable warrant which had been issued; the arrest being proper; the only question being handcuffing of the petitioner not being required, I deem it fit to award a sum of Rs.2 lakhs as compensation to the petitioner payable by the State within a period of six weeks from the date of receipt of a copy of this order with liberty to the state to recover the same from the delinquent officers."