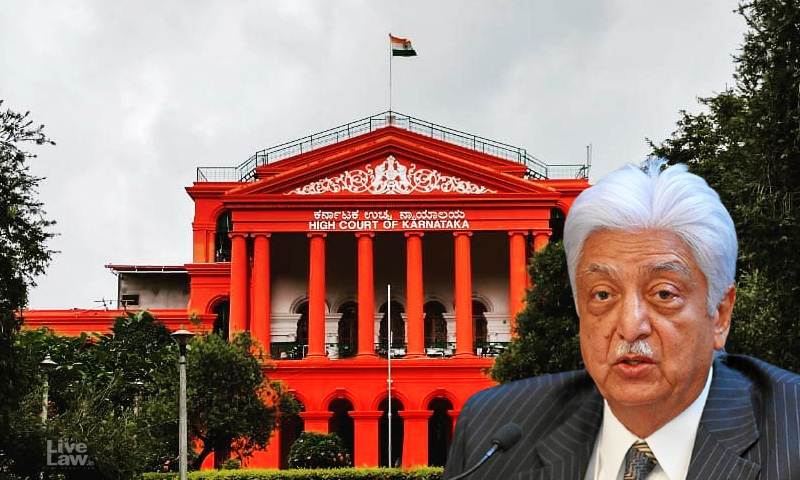 The Karnataka High Court has dismissed a petition filed by a not for profit company named "India Awake for Transparency", challenging an order of the magistrate court dismissing its private complaint seeking directions to Reserve Bank of India to register a case against Wipro founder Azim Premji and others under the Reserve Bank of India Act. A single bench of Justice Suraj...

The Karnataka High Court has dismissed a petition filed by a not for profit company named "India Awake for Transparency", challenging an order of the magistrate court dismissing its private complaint seeking directions to Reserve Bank of India to register a case against Wipro founder Azim Premji and others under the Reserve Bank of India Act.

A single bench of Justice Suraj Govindaraj while dismissing the petition said:

"I am of the considered opinion that the writ petition filed is an abuse of process of law and of this court, the same is not maintainable. The grievance of the petitioner has already been addressed by RBI by its order dated 5.09.2017 passed. If at all the petitioner has any grievance as regards the said order, the petitioner is required to take adequate and necessary steps not by filing of proceedings by way of a private complaint before the Magistrate or by way of writ petition before this Court."

The petitioner had challenged the order dated July 28, 2020, by which the private complaint filed by it was dismissed. In its complaint It was alleged that the RBI Act was amended with effect from 9.1.1997 to strengthen the role of RBI in supervising Non Banking Finance companies (NBFC). Section 45 IA of the RBI Act made it mandatory for all the NBFC to obtain registration from RBI in the event of the business being conducted without such registration, such an entity could be prosecuted under Section 58B(4A).

The complainant alleged that respondents being directors of various companies were carrying on non-banking financial business in the said companies without registration and as such had committed offences under Section 45IA of the RBI Act and as such they were to be prosecuted.

Senior Advocate S Ganesh, instructed by Advocate Sandeep Huligol appearing for the respondents raised a preliminary objection on the maintainability of the petition. It was submitted that "The above writ petition is not tenable, that the issue raised in the private complaint has already been decided by the Delhi High Court in W.P.No.4905/2017. Moreover, the petitioner having filed PIL before this Court and having withdrawn the same unconditionally without reserving any liberty, the present writ petition is not maintainable and as such, the writ petition is to be dismissed."

It was also pointed that the petitioner had also filed a PIL in W.P.No.3635/2020 before the High Court whereunder the Governor of RBI and various other entities had been arrayed as parties and that in the said matter also allegations were made as regards violation of RBI Act, more particularly relating to registration of the NBFC.

It was contended that once the proceeding had been filed making allegations before this Court as a PIL or otherwise and the same had been withdrawn, the filing of the present writ petition is barred by relying on the decision of the Apex Court in Sarguja Transport Service –v- State Transport Appellate Tribunal and others [1987(1) SCC 5].

Further, it was said that "The said order of the RBI having been made in pursuance of the order of the Hon'ble Delhi High Court has an effect of res judicata, the petitioner cannot once again reagitate the same except by way of an appeal"

Before the Delhi High Court, the relief which had been sought for was for a mandamus to decide on the representations given by the petitioner, whereas the proceedings in PCR had been filed to register a complaint against respondents.

The PIL which had been filed before this Court was also relating to a completely different aspect inasmuch in the said PIL, the petitioner had sought for the constitution of a Multi Disciplinary Investigation team to investigate and prosecute the 11th respondent therein and his associates, which is completely different from that which is sought for before the Magistrate.

"What this court is required to look into and appreciate is if the reliefs sought for on the allegations made are one and the same. Clever drafting and or subterfuge resorted to in such drafting would not take away the fact that the allegations made in all three proceedings are one and the same.The wording being different is only the careful and ingenious drafting of the prayers and/or the reliefs sought for since the forums are different but essentially in all the three matters what has been sought is a direction to the RBI to take action against respondents No.2 to 7 for alleged violation of Section 45-IA of the RBI Act."

The bench also noted that RBI has categorically debunked the allegations made by the petitioners against respondents. It has categorically stated that the merger cannot be annulled or RBI cannot approach the Court for annulment of such merger.

"The allegations and/or complaints of the petitioner having already been considered by the RBI and a detailed order dated 5.9.2017 having been passed by the RBI, I am of the considered opinion applying the principles laid down by the Apex Court in Sarguja's case that when the petitioner unconditionally withdraws a particular matter, the said subject matter could not be re-agitated in any other proceedings."

The bench concluded by saying :