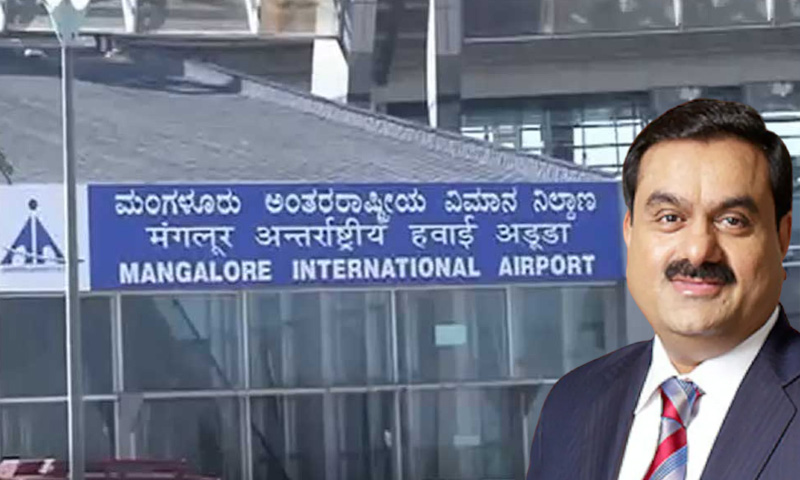 The Karnataka High Court on Tuesday dismissed a petition filed by the Airports Authority Employees Union, challenging the decision of the Central Government and the Airports Authority of India to hand over the contract for operation and management of Mangalore International Airport to Adani Enterprises Limited.

A division bench of Acting Chief Justice Satish Chandra Sharma and Justice Sachin Shankar Magadum passed the order considering that a similar matter was decided by the Kerala High Court and the decision of leasing the airports being a policy decision taken by the government of India, no interference is required. The Kerala High Court had last year rejected a challenge made to the handing over of the Trivandrum airport management to Adani Group.

Full copy of the judgment is awaited.

Senior Advocate Ashok Haranahalli appearing for the petitioners, referred to Section 12 of the Airports Authority of India Act, had submitted that "The premises of the airport can be leased but my submission is that the entire airport is given away to a private person for operations."

Further, it was submitted that "Runways and taxiways and aircraft rescue fire buildings are also leased out. These are part of air traffic service, they could not have been leased at all." He added, "Virtually, the control over aviation services is given to them, it is contrary to AAI Act."

It was also claimed that AAI did not conduct any feasibility study for fixing any reserved price in the bidding process for the project. Under the policy of the government of India, all airports have gone to one company and there is no share in revenue with the government for a period of 50 years, the lease period of the airports.

The petition filed by the Union challenges the Centre's decision to privatize six airports in the country as "illegal, arbitrary and beyond the scope of the Airport Authority Act, 1994".

The petition seeks a declaration that the entire bidding process pursuant to the decision of the Cabinet committee dated 08.11.2018 for privatization of Airports as illegal, arbitrary and beyond the scope of the Airport Authority Act, 1994.

It further seeks to quash the Cabinet Decision dated 03.07.2019 accepting the bid of the 6th Respondent (Adani Enterprises Limited) as illegal and beyond the scope of the Airport Authority Act, 1994 and also for quashing the consequential concession agreement dated 14.02.2020 entered into between the 2nd Respondent (AAI) and the 6th Respondent.

The plea also states that Respondent No. 1 and 2 are in a position of a trustee in respect of the public property under their charge and discretion. The Government land is the wealth of the State which the Respondents should deal with, in a bonafide manner and in conformity with law. The Respondents have deviated from the trust reposed in them by the people under the Constitution.

Opposing the petition Additional Solicitor General M B Nargund appearing for the Union government first raised the question of maintainability. He submitted that a branch of the same union had filed a petition before the Honourable Kerala High Court, challenging the policy of the government and the same had been rejected. The present petition is thus not maintainable.

However, Advocate Haranahalli countered the submission by saying that the petition before the Kerala High Court was limited to the lease granted in favour of Thiruvananthapuram airport to Adani Group. He relied on Section 12 A (1) (3) which reads thus:

(3) Any money, payable by the lessee in terms of the lease made under sub-section (1), shall form part of the fund of the Authority and shall be credited thereto as if such money is the receipt of the Authority for all purposes of section 24.

"What the government thought that in order to generate funds for new establishment of secondary and tertiary airports, everytime it is practically difficult for the government to allot funds, instead of that a system has been developed, wherein the money which is generated from here (leasing of the airports), AAI will use this particular money for purpose of creating new airports. The object is not only to develop Mangalore and Mumbai airports but even for development of airports in Gulbarga, Bidar etc this funds will be diverted. Taking this holistic approach a scheme has been brought into force."

Further, he argued that the petitioners have not challenged the government of India policy, then the scope of challenging the implementation of the same is limited. The government had called for tenders. Earlier, only foreign bidders were participating in the airport bidding, because of the conditions imposed. But due to a change in the policy, Indian Management companies could participate in the bidding process now.

Nargund, while pleading that the petition be dismissed said, "The present petition was filed before the Karnataka High Court when the matter was pending for judgement before the Kerala High Court."

Other respondents in the matter, the Airports Authority of India adopted the arguments made by the Union of India.

Last year, the Kerala Government had challenged the handing over of Thiruvananthapuram airport to Adani Group, overlooking the bid submitted by a state instrumentality. However, Kerala High Court dismissed the challenge and upheld the acceptance of Adani's bid. The Kerala Government has filed a special leave petition in the Supreme Court against the verdict which is pending.