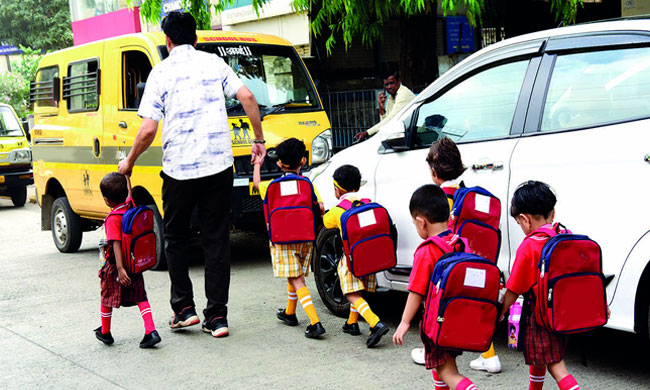 A public interest litigation has been filed in the Karnataka High Court seeking a direction to the state government to take appropriate measures to minimise the weight of school bags carried by students of primary education.

Advocate Ramesh Naik. L states that the petition has been filed with a concern about children's all round physical and mental health development. "If one tries to visualise the schooling process in the present time, one sees an image of the child with a bag on the shoulder. The very posture and expression on the face of the child give an impression that the bag is very heavy for the child."

It is claimed that there are a number of Laws, Rules, Government Notifications, Circulars which govern the school education system in the States but, most of them lack provision on weight of the school bags. The Children's School Bag (Limitation on Weight) Bill was introduced in Rajya Sabha in 2006, but was shelved later.

The plea refers to Centre's "Policy on School Bag- 2020" which sets a cap on the weight of school bags to be carried by students. However, Naik claims that he has been a witness to the "plight" of primary school children carrying heavy school bags on their back in Tumkur, Bangalore and at many other places.

It is also claimed that various studies by the health experts say that heavy school bags are a serious threat to the health and well-being of the students; it has severe/ adverse physical effects on growing children which can cause damage to their vertebral column and knees.

Hence, the Petitioner avers that any inaction on part of the State government to reduce the weight of school bags violates students' fundamental rights under Article 21 of the Constitution.