'There May Be Illegitimate Parents But No Illegitimate Children': Karnataka High Court Strikes Down Condition Denying Compassionate Appointment To Children In Second Marriage 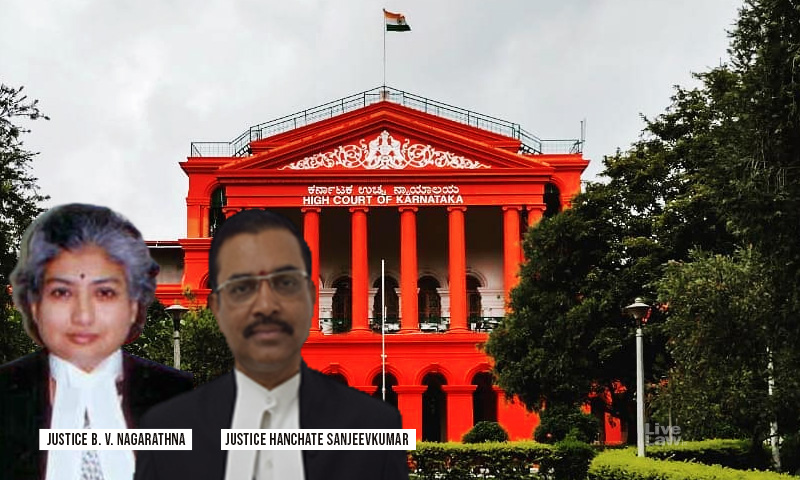 The Karnataka High Court has set aside a circular issued by the Karnataka Power Transmission Coporation Ltd by which it denied appointment on compassionate grounds to the second wife and her children of a deceased employee as the marriage has taken place during the subsistence of the first marriage. A division bench of Justice B V Nagarathna and Justice Hanchate Sanjeevkumar said "We...

The Karnataka High Court has set aside a circular issued by the Karnataka Power Transmission Coporation Ltd by which it denied appointment on compassionate grounds to the second wife and her children of a deceased employee as the marriage has taken place during the subsistence of the first marriage.

A division bench of Justice B V Nagarathna and Justice Hanchate Sanjeevkumar said "We set aside the Orders of the learned Single Judge in the Writ Petition as well as the Review Petition. We quash the communication dated 11.03.2015 addressed to the fourth respondent by the third respondent (Annexure-B). We also quash the Circular dated 23.09.2011 to the extent in clause(2)."

"Under no circumstances, the second wife nor her children are eligible for compassionate grounds appointment, if the marriage has taken place during the subsistence of the first marriage."

The court allowed the appeal filed by K. SANTHOSHA and directed the authorities to consider his application seeking appointment on compassionate grounds in accordance with the observations made above and in accordance with law. The said consideration shall be made within a period of two months from the date of receipt of certified copy of this judgment, as the employee died on 10.06.2014, which was seven years ago."

The petitioner is the son of deceased Kabbalaiah, who was working as Lineman Grade-II with the BANGALORE ELECTRICITY SUPPLY COMPANY LIMITED. He died in harness on 10.06.2014. During his lifetime, he was married for the second time during the subsistence of his first marriage.

Out of the second marriage, the petitioner was born. On the death of his father, petitioner made an application seeking appointment on compassionate basis under the Regulations titled Karnataka Electricity Board Employees' Recruitment (Appointment on Compassionate Grounds) Regulations. The respondents rejected the claim of the petitioner on the ground that he was the son of the second wife of the deceased employee Kabbalaiah and his father had married his mother during the subsistence of his first marriage. Therefore, he was not entitled to appointment on a compassionate basis.

The respondent relied on the Circular dated 23.09.2011 issued by respondent No.1 wherein in Clause 2, dealing with the eligibility for appointment on compassionate basis, it was stated that neither the second wife nor her children are eligible for compassionate grounds appointment, if the marriage had taken place during the subsistence of the first marriage.

The petitioner challenged the circular and the communication issued to him rejecting his application dated 11.03.2015, before the high court. The single judge bench rejected his petition, even in a review petition the court held against him. Following which he filed an appeal.

The submission of the petitioner.

Advocate SUBRAMANYA BHAT argued that Regulations 2(1)(a) and 3(2) state that the dependent son is entitled to be appointed on a compassionate basis. It was also submitted that what is stated in Regulation 3(2)(a) is 'son', the same is not qualified by saying that the son has to be born out of a valid wedlock. It was submitted that any male child born to a couple is a 'son'. "The Rule making authority therefore has deliberately used the expression 'son' and has not restricted it by any other condition such as to the effect that the son should have been born out of a valid marriage of the deceased employee who died while in service."

Further, it was said that the Circular dated 23.09.2011 stating that, under no circumstances, the second wife or her children are eligible for compassionate grounds appointment, if the marriage is taken place during the subsistence of first marriage, is contrary to the Regulations.

"It was submitted that when Regulations do not restrict the claim of a son, the Circular cannot put an embargo on such a claim by stating that neither the second wife nor her children are eligible for appointment on compassionate basis, if the marriage has taken place during the subsistence of first marriage," Bhat contended.

Attention was also drawn to section 16 of the Hindu Marriage act and the judgement of the Supreme Court in the case of Union of India vs. V.R.Tripathi [(2019) 14 SCC 646], (V.R.Tripathi), wherein it has been categorically observed that, though there may be restriction to an illegitimate child succeeding to the ancestral properties of the deceased parent and the right is only with regard to the separate property of the deceased parent when their marriage is void, the same -: 8 :- cannot be construed as a restriction so as to prevent the son born out of a void marriage to claim appointment on compassionate basis.

The court noted "In the absence of such a qualification being made in the Regulations by way of an exclusion of such category of persons, question arises, whether the same could have been clarified by way of an embargo under Circular dated 23.09.2011, which has been issued for the purpose of implementation of the Regulations."

Then the court considered the expression family as is found in Regulation 4(1), wherein it is stated that the family of the deceased Board employee should be in immediate financial crisis or destitution on account of the death of the employee. Therefore, that is the consideration to be made when an application is preferred by the 'son', 'unmarried daughter' or 'widow' of an employee, who died in harness for seeking compassionate appointment.

It held "The expression 'family' cannot be imported into Regulation 3(2) to interpret the same to mean that, it is only a legitimate son, legitimate unmarried daughter or a widow, who was a legally wedded wife or spouse of the deceased Board employee who are entitled to be considered for appointment on compassionate basis."

The court also said "If such was the case, there could have been an express exclusion of such a category of persons as has been made vis-à-vis adopted son or daughter under Regulation 3(3). But, the rule making authority in its wisdom has not thought it fit to restrict the rights of or qualify a son – as legitimate son and unmarried daughter – as legitimate daughter."

It was also observed "Having regard to the broad interpretation given to the expression 'son' and 'daughter' so as to include even on illegitimate son and daughter by the Hon'ble Supreme Court (in the case of V R Tripathi) for the purpose of consideration for compassionate appointment, we find that Regulation 2(1) (b) cannot restrict the expression 'family' in relation to a deceased Board employee to mean only his or her legally wedded spouse and their sons and daughters who were jointly living with him. Such a definition would run counter to Section 16 of the Hindu Marriage Act, which is a Parliamentary legislation and also Articles 14, 15(1) and 16(1) as well as the Directive Principles of State Policy concerning children which would include all children, whether legitimate or illegitimate, to have equal opportunities."

The court added "When the Parliament under Section 16 of the Act, has treated legitimate and illegitimate children on par and given them equal status, Regulation 2(1)(b) cannot restrict the expression family in relation to deceased employee to mean only his or her legally wedded spouse and children jointly living with him."

The court then observed that "No child is born in this world without a father and a mother. A child has no role to play in his/her birth. Hence, law should recognise the fact that there may be illegitimate parents, but no illegitimate children. Therefore, it is for the Parliament to bring about uniformity in law vis-à-vis legitimacy of children. Thus, it is for the Parliament to determine in what way protection could be extended to children born outside a valid marriage."