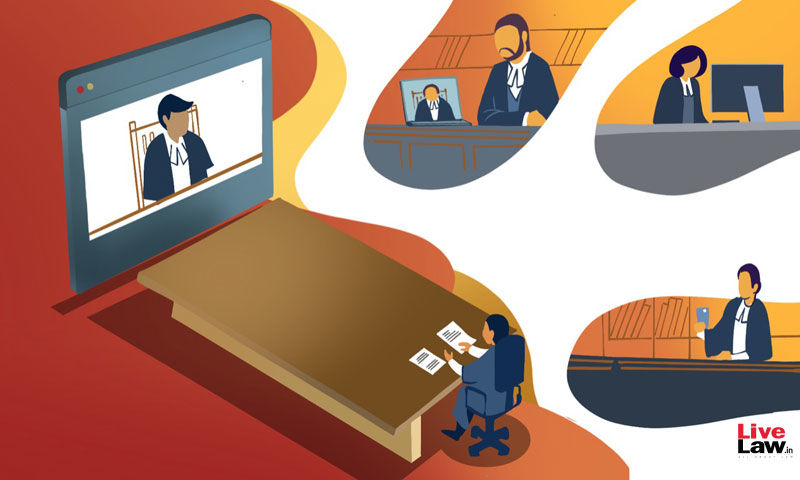 The Karnataka High Court has held that a counsel/advocate appearing for the parties are entitled to be physically present at the remote point from where the evidence of such party is being recorded through video conferencing.

A single judge bench of Justice Sachin Shankar Magadum allowed the petition filed by one K Lakshmaiah Reddy challenging the order of the trial court, declining permission sought by his counsel to be present at the remote point while recording of evidence.

"In fact, Rule 14 (Rules for Video Conferencing for Courts) which lays down guidelines for conducting proceedings through video conferencing clearly contemplates and authorises all Advocates to be present physically at remote point. A discretion is also vested with the Court in a given set of facts to permit the counsel or any other unconnected participants to be physically present at the remote point. It is in this background, this Court would find that the learned Judge erred in not exercising discretion judiciously."

The present petitioner is a resident of Michigan, USA and is aged about 87 years and is suffering from various health issues. The petitioner filed applications under Rule 6 of the Video Conferencing Rules and also application under Order 18 Rule 16 of CPC to examine the petitioner immediately. The said applications were allowed by the Trial Court thereby permitting the present petitioner/defendant No.2 and defendant No.5 to record their evidence through Video Conference. The trial court fixed the date of recording evidence through video conferencing on 06.06.2022.

The petitioner filed memo on 25.05.2022 requesting the Court to make further email correspondence towards logistic support and to inform the remote point coordinator to issue 5 entry passes to enable the petitioner to have assistance of his Advocate and also attendants.

The contesting defendants filed statements of objections to the said memo. The trial Judge refused to permit the petitioner's Advocate to be present at the remote point while recording evidence.

The Bench noted that Rule 14 of the Rules for Video Conferencing for Courts clearly enables all Advocates to remain present with the party and the only rider to the same is that the participants are required to abide by the requirement set out in Schedule-I to the Rules. Therefore, the "Required Person" as defined under Rule 2(xii) would not necessarily mean that it is only the witness, who has to be examined, has to be physically present at the remote point.

It observed, "Rule 14 clearly contemplates and permits all Advocates including required persons or party-in-person to be physically present at the remote point. Further, Rule 14.7 also gives discretion to the Court in a given case to permit the Advocate or any other participants that Court deems necessary at the remote point or Court point."

The bench then observed,

"The definition "Required Person" and further persons who can be permitted to be present at the remote point as contemplated under Rule 8.11 cannot be so narrowly construed and interpreted so as to exclude a counsel. If such a proposition is accepted, that would take away the valuable rights of a client who is entitled for apt assistance by his counsel on record. It is an established tradition that a trusting relationship between a client and Advocate is necessary for effective representation."

Stating that advocates on record are the central influence in the courtroom, the bench said, "Personal contact between a counsel and his client stand together in Court and therefore, is deemed very important in establishing trust which would ultimately result in establishing a litigants' faith in the legal system overall and this trust is often built by the Advocates on record who are also officers of the Court."

Junking the contention of the witness being prompted or tutored by the presence of advocate at remote point, the bench said,

"The definition "Required Person" under Rule 2(xii) coupled with Rule 8.11 authorising a coordinator at the remote point to ensure that no person is present at the remote point cannot be read in isolation. The above said relevant rules have to be conjointly read along with Rules 14.1 and 14.7. A witness is entitled for legal assistance even when he is cross examined. However, at the time of cross-examination, his counsel cannot prompt or tutor him. Based on mere apprehension, the above said rules cannot be narrowly interpreted so as to exclude the counsel on record who is an integral part of the legal system and plays a vital role in dispensation of justice."

Accordingly it held, "Therefore, in the present case on hand, defendant No.2 is entitled to seek legal assistance even when he is being cross-examined by way of video conferencing. Using video conferencing, the defendant's rights cannot be sacrificed in the name of procedural efficiency."

Video conferencing does have a place in the legal system

The bench expressed that looking to the recent trend, video conferencing does have a place in the legal system. The challenge is not to exclude it but to use it responsibly. The video conferencing can produce better results, but at the same time, certain highlighted issues which may prop up down the line have to be addressed effectively.

Further it said, "The Rules framed by this Court do not intend to support plaintiffs team or a defence team. The counsel appearing for respective clients are entitled to stand together and the same is necessary for an attorney-client relationship to function properly. A medium that interferes with the court's main mission should be eliminated."

It opined, "By introducing technology and by bringing in recording of ocular evidence through video conferencing, an attempt is made in all good faith to meet the standards of face-to-face trial."

Denial of Right of Audience:

The court also expressed that the contesting parties are entitled to have a discussion with their Advocates on record as they need to discuss important decisions concerning vital documents, basic legal strategy prior to appearing in Court. Personal meetings are better for hastening out case strategies, fact gatherings and basic legal tactics. Therefore, it is in this context, if the proposition of respondents is accepted and if counsel appearing for a witness who is supposed to be cross-examined is denied a right of audience at a remote point.

"The apprehension that the ocular evidence recorded through video conferencing will not satisfy the prescribed requirements of a fair trial and the same would create a doubt in regard to legitimacy of a legal process may turn out to be a hard reality. Therefore, denial of right of audience to a counsel on record has its own ramifications and may result in violation of fundamental fairness and may also have impact on due process of law."