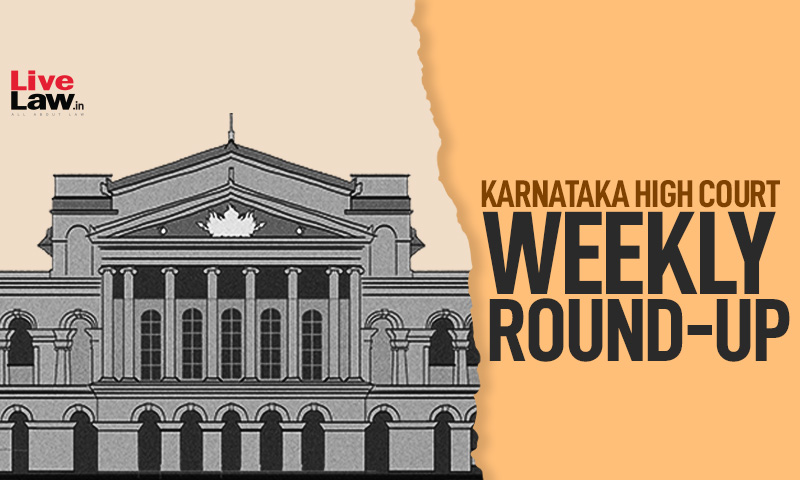 Case Title: BANU BEGUM W/O KHAJASAB ALIAS MEHABOOBSAB and Others Versus State of Karnataka

The Karnataka High Court has said that in the absence of a declaration that a child is deserted by his biological or adoptive parents or guardians, filing of chargesheet under section 80 of the Juvenile Justice (Care And Protection Of Children) Act 2015, is without any substance.

Observing that, "She had no criminal intention in the initial stage while obtaining the (caste) certificate and seeking reservation and got (job) appointment, but she bonafidely believed that she will get the caste of her husband in view of marrying the person who belongs to member of SC/ST," the Karnataka High Court recently quashed the criminal proceedings pending against a 68-year-old woman (Brahmin by birth), who was charged under provisions of the Scheduled Caste and Scheduled Tribe (Prevention of Atrocities) Act, 1989.

The Karnataka High Court recently directed a husband to pay Rs 25,000 as litigation expenses to allow the wife to engage an advocate and to contest the proceedings filed by him seeking dissolution of marriage.

The Karnataka High Court has ruled that as per Section 13 of the Notaries Act, there is a bar for taking cognizance by the Court for offences committed by an advocate and notary while adding that under the Act, the police have to obtain the permission of the Central Government or State Government for filing the charge sheet and taking cognizance.

The Karnataka High Court has held that proceedings under Section 420 of the Indian Penal Code are maintainable even if a complaint has been invoked Section 138 of the Negotiable Instruments Act.

The Karnataka High Court on Thursday extended its earlier interim order staying the order issued by the Enforcement Directorate dated April 29, by which it had seized Rs.5551.27 crores from M/s Xiaomi Technology India Pvt Ltd under the provisions of the Foreign Exchange Management Act,1999 (FEMA).

Case Title: GOOGLE INDIA PRIVATE LIMITED & others versus COMPETITION COMMISSION OF INDIA & others

The Karnataka High Court on Tuesday temporarily restrained the Competition Commission of India (CCI) from divulging confidential information of Google India Pvt Ltd to the complainant Alliance Of Digital India Foundation till May 25.