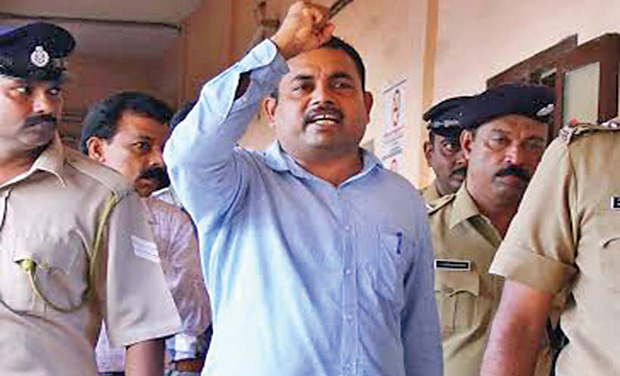 A Kerala Court has permitted Roopesh, who is undertrial in several cases for alleged links with Maoist organizations, to use Internet facility for 45 minutes every week for the purposes of legal research.He can access only the official websites of the Supreme court and various High Courts in India, India Code, Indian Kanoon and any useful search engine for accessing any of the...

A Kerala Court has permitted Roopesh, who is undertrial in several cases for alleged links with Maoist organizations, to use Internet facility for 45 minutes every week for the purposes of legal research.

He can access only the official websites of the Supreme court and various High Courts in India, India Code, Indian Kanoon and any useful search engine for accessing any of the said website, Additional Sessions Judge P. Krishna Kumar said.

Roopesh, who is in judicial custody since 2015, had filed a petition before the court seeking a direction to the prison authorities for providing limited and indirect access to Internet for collecting legal materials like judgments of the constitutional courts and various statutes. He submitted that the study materials available with him has been exhausted and they are no more helpful to him to defend the ensuing trial in various courts. He submitted that he has been prosecuted for 39 cases in various courts and he is conducting the trial as party in person in most of the cases. He is presently in Central Prison, Viyyur.

Senior Public Prosecutor for NIA submitted before the court that a  controlled access could be given to him for a limited time, by making sure that he is not misusing the liberty to disseminate some message to his confiderators. State prosecutor also submitted that it has no objection in giving permission to the petitioner to use the Internet for the sole purpose of accessing legal materials from the official websites of the Government Authorities or the websites like Indian Kanoon etc.

"This court had the opportunity to see the legal acumen of the petitioner on a number of occasions. He always comes prepared to address the court with suitable precedents and legal provisions. He is a law graduate.", the judge observed in the order.

The court also noted that the Prisoners Act or the Kerala Prisons & Correctional Services (Management) Act, 2010 or the Rules made thereunder neither prohibits nor permits the under­trial prisoners from using Internet for accessing legal materials or otherwise. "When it is declared by the constitutional courts that right to legal aid and right to use Internet are fundamental rights, the petitioner has every justification in asking permission to use the same for accessing legal materials to properly defend his case, in the absence of any prohibition in the prison laws. But the exercise of that right depends upon the availability of that facility in the prison and the capability of the prison authorities to provide it to the petitioner or any other person who demands it, without compromising the risk elements involved. Such a facility can be provided to a person only if there is enough mechanism to regulate its use in a reasonable manner and also to prevent the misuse of the same.", the judge said.

The court, however, agreed with apprehension raised by state prosecutor, that if such a facility is extended to him, there might be demand from the other prisoners as well and the prison authorities may not be able to handle such demands without compromising the risk factors involved in the usage of Internet facility by the inmates. Thus, the court disposed of the petition by issuing following directives:

(1) If the petitioner makes a request to the Member ­Secretary, Kerala State Legal Service Authority, Niyama Sahaya Bhavan, High Court Compound, Ernakulam for providing adequate legal aid, including the facility to provide limited and controlled access to the Internet to collect legal materials, the Superintendent of Prison shall forward the same.

(2) Based on the submission made by the prison authority that they are ready to provide journals to the inmates of the jail, if the court directs, the Superintendent of Prison, Central Prison, Viyyur is directed to arrange Software based law journals (like KHC, Verdicts etc) to the petitioner.

(3) When such software based law journals are made available, petitioner shall be permitted to use the computer in which it is enabled for a reasonable duration.

(4) Until a decision is taken on the petition given to the Member Secretary, KELSA or until the direction No. 2 is implemented, the petitioner shall be permitted to use Internet facility for a duration of 45 minutes every week to access only the official websites of the Hon'ble Supreme court and various High Courts in India, India Code, Indian Kanoon and any useful search 8 engine for accessing any of the said websites.

(5) The Superintendent is also directed to implement necessary Firewall protection to the computer so as to restrict the use of Internet only with the above said official websites.

(6) The Superintendent of the prison shall take steps to place the computer (in which the petitioner would access Internet or the Software based law journal), in such a manner to cover its screen in a CCTV camera which is available in the prison, so as to ensure that the liberty given to the petitioner is not misused.

(7) The Jail Superintendent shall fix the usage charges for the Internet facility being used by the petitioner, taking into account the actual charges caused by such usage and the incidental matters, and shall adjust it against the wages to be given to the petitioner, if he exercises his option under section 54 of the Kerala Prisons & Correctional Services (Management) Act, for availing employment in the prison.

Last year, the High Court of Kerala had discharged him from charges under UAPA and sedition in one case. The State Government has filed SLP in the Supreme Court against thie discharge given by the HC.