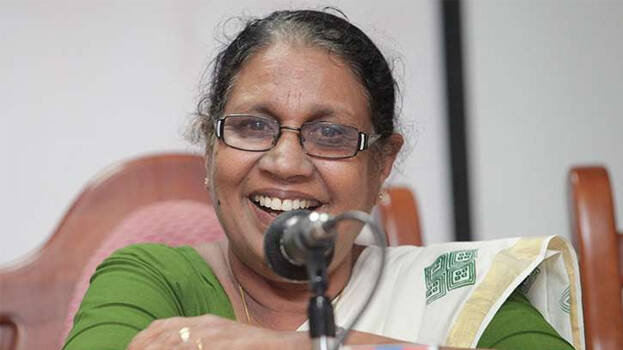 The Kerala High Court on Friday dismissed a petition seeking directions to remove the State Women's Commission chairperson M.C. Josephine from her post over her alleged remark that her party, CPI(M), was working as both a court and a police station.

"It is, therefore, only where a person usurps a public office without authority, that a writ of quo warranto would be issued under Article 226 of the Constitution of India. In the instant case, the allegations of the petitioner, even if accepted in toto, do not extend to stating that the 4th respondent is a usurper to the office of the Chairperson of the Kerala Women's Commission. The contention essentially is that her conduct which tends to be against the interest of women, whom she is duty bound to protect, amounts to acting in derogation of the Act under which she has been appointed. Even if all the contentions are accepted, I am of the opinion that the situation for issuance of a writ of quo warranto would not be available in the instant case", the bench expressed the view.

The petition by Mahila Congress state president Lathika Subhash contended that by her reactions and declarations in the print and electronic media as to the right of a woman who complained of sexual harassment to take recourse to legal remedies including by approaching the Women's Commission, the respondent has acted in a manner unbecoming of the post of Chairperson of the Kerala State Women's Commission.

It was alleged that a Chairperson or member of the Women's Commission is expected to be a person of sensitivity to women's issues and a person of absolute integrity. It was stated that on several occasions, the respondent has expressed her lack of faith in the Commission which she chairs and in the legal system.

It was stressed that by declaring that the political party to which she owes allegiance is capable of providing adequate remedies even in cases of sexual misconduct alleged against its members, she has made her lack of confidence in the Commission and the legal system clear.

It was argued that these statements render her incapable of functioning as a member of the Women's Commission.

Finally, it was urged that Section 5(1)(a) and 5(3) of the Kerala Women's Commissions Act, 1991 provides the minimum required qualifications for appointment of a person as Chairperson or member of the Commission, and that the respondent, who has allegedly acted against the interest of women in general has proved that she does not have the qualifications so required.

"In the year 2020, an incident of gang rape of a woman in front of her children occurred In Kadinamkulam, Thiruvananthapuram. The accused were taken into Police custody. When the 4'" respondent came to Kadinamkulam to visit the victim and her family, and was interacting with the press, a question was raised from a journalist as to why the 4'" respondent vociferously reacts in all incidents of sexual assaults except that involving CPIM members. The incident involving Mr. P.K.Sasl was quoted by the journalist. This infuriated the 4'" respondent to the extent that she lashed out against the journalist stating that in the above incident she had visited the victim's family and it is on their decision that the CPIM will internally investigate the same, that she decided not to enquire into the matter", it was pleaded on behalf of the petitioner.

The judgment extracts the exact transcript of the respondent's reaction- "My party, the Communist Party of India Marxist, I may be Women's Commission now, but I grew through the party. No other party in Kerala takes a strict stance on such issues like my party. You know? I know the incident you are referring to. What happened there? The family there told me that they wanted only party action. They are believers of the party. Our party is also a Court. It is a Police Station also. Do you understand? We do not excuse any leader in such issues. No need for doubt there. Do not ask questions for the sake of asking them"

The Single Bench took note that a parallel is being drawn to the case of Smt.Nirmala Venkatesh, a National Women's Commission Member who made a public comment with regard to the conduct of women involved in a pub attack in Mangalore who had been removed from office by the Central Government. "It is stated that in the instant case also, a person who made comments in the nature that have been attributed to the 4th respondent would be incapable of continuing in office. It is further stated that on the comments made by the 4th respondent coming to light, the State Government should have invoked Section 11(1)(d) and Section 11(1)(f) of the Kerala Women's Commission Act to remove the 4th respondent from her position. It is contended that the conduct of the 4th respondent disqualifies her from holding and continuing as Chairperson of the Kerala State Women's Commission thereby necessitating the issuance of writ of quo warranto as against her continuance in office", the Single Judge recorded.

The Court further reflected that the writ of quo warranto was one of the most ancient writs exercised by the crown in England. The bench opined that though the high prerogative writs available to the crown in India have undergone changes in accordance with the changing times and the writs exercised by the writ courts in India are writs in the nature of the high prerogative writs issued by authority of the British Crown, the basic requirement of governing the issuance of a writ of quo warranto as sought for, cannot be eschewed by the Court.

With regard to the further prayer seeking declaration that the respondent is not fit to occupy the post of Chairperson, the bench noticed that the writ petition contains no allegation that any complaint had been preferred by the aggrieved woman in the alleged incident involving a member of the political party to which the respondent belongs. "The contention is that the commission did not take suo motu action in the said instance,while such action had been initiated in other cases. I am of the opinion that the pleadings in the writ petition would not justify the issuance of a declaration that the 4th respondent is not fit to occupy the post of Chairperson of the Commission. In case the petitioner has any complaint with regard to the functioning of the 4th respondent as Chairperson of the Women's Commission, it is for the petitioner to take up the issue before the competent authority in accordance with law", said the Judge, dismissing the plea.