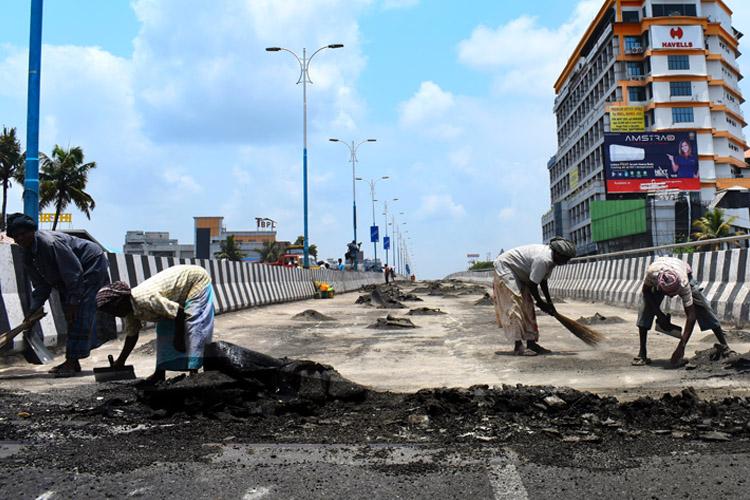 The High Court of Kerala on Thursday restrained the state government from demolishing until further orders the controversial Palarivattom flyover bridge which has been shut for traffic since May after it developed cracks within a few years of its construction taken up during the previous UDF tenure.

A division bench comprising justices A M Shaffique and T V Anilkumar gave the interim order on a petition by the Ernakulam-based Association of Structural and Geotechnical Consulting Engineers challenging the government's decision to demolish and reconstruct the Palarivattom Flyover.

The petition contended that the decision to demolish the bridge was taken without conducting load test to ascertain its structural stability.

The government last month decided to rebuild the flyover, which has been closed for traffic since May after cracks and potholes surfaced within three years of its commissioning. It had also ordered a vigilance probe into alleged corruption in the construction of the bridge.

Sreedharan had suggested the flyover be rebuilt and the suggestion has been accepted by the government, Vijayan had said.

The petitioner association claimed the findings of Sreedharan about the stability of the bridge were wrong and he had recommended demolition without carrying out the load test.

The association sought appointment of an independent agency for conducting the load test.

The construction of the 750-metre long flyover began during the Congress-led UDF government. It was completed during the LDF's tenure in October 2016.

Within three years of its construction, large cracks were noticed in the pier caps of various pillars of the flyover following which it was closed for traffic.

Vijayan had ordered the Vigilance and Anti Corruption Bureau to probe the alleged corruption in the construction of the flyover.

Retired Kerala PWD secretary T O Sooraj and three others -- a top official of the company which constructed the flyover and two officials of a technical consultancy firm -- were arrested last month by the VACB in connection with the case. The High Court rejected the bail applications of three accused observing that the allegations were serious and accused were highly influential.

Former PWD minister V K Ibrahim Kunju had also been questioned by the Vigilance bureau in the case, but he had dismissed as "politically motivated" the charge that he was responsible for the poor quality of the flyover.