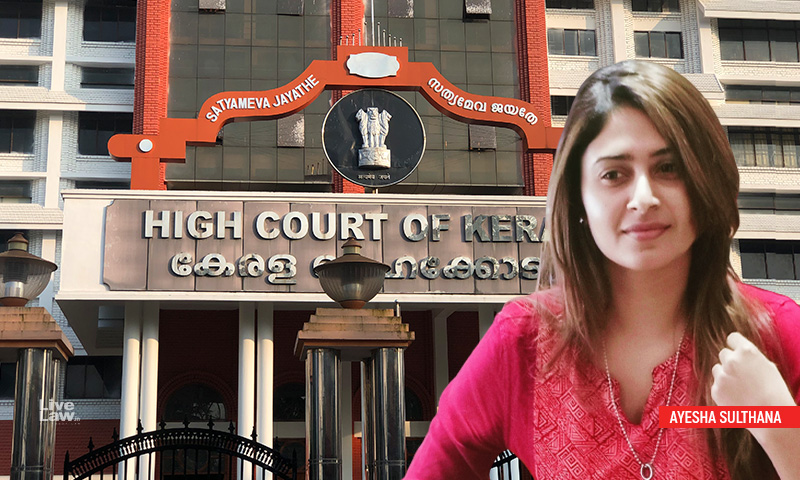 The Lakshadweep Administration has filed its statement in the Kerala High Court opposing filmmaker Aisha Sultana's plea to quash the FIR registered against her in the sedition case. The statement filed through Central Government Standing Counsel S Manu pressed that the FIR was not liable to be quashed and urged that a detailed investigation was required in the matter. It narrated...

The Lakshadweep Administration has filed its statement in the Kerala High Court opposing filmmaker Aisha Sultana's plea to quash the FIR registered against her in the sedition case.

The statement filed through Central Government Standing Counsel S Manu pressed that the FIR was not liable to be quashed and urged that a detailed investigation was required in the matter. It narrated a chronological order of the investigation conducted to show that it had made steady progress.

The Administration alleged that Sultana was not cooperating with the police in the ongoing investigation. The statement contended that she deleted relevant text messages and chats from her mobile phone after the registration of the crime, raising further suspicions. It also stated that she refused to make available the requisite documents.

The Union Territory added that her financial transactions were not transparent, thereby calling for a detailed investigation.

"She has not been properly cooperating with the investigation and refused to provide documents demanded by the police. On the other hand, she raised several baseless allegations against police after filing the above Crl MC and indulged in a malicious campaign against the police through media. Apparently, her aim is to dissuade the police from conducting a proper investigation by unleashing false propaganda."

In its elaborate statement, the Administration accused Sultana of reading something from her mobile phone before making the alleged seditious remarks in the controversial debate. They claimed that this was evident from a closer look at the TV debate that aired following the incident. Based on this allegation, the Administration submitted that she was regularly in touch with certain people during the incident.

Additionally, the Administration alleged that the Media One channel management was not properly cooperating with the investigation and that most of the information sought by the police through statutory notices have not been furnished by the channel.

Merits of the Case:

At the outset, the Administration contested the maintainability of the petition on the ground that quashing of FIR in the exercise of the powers under S 482 CrPC is justified only in exceptional circumstances.

However, in this case, the challenge was against an FIR registered on 9th June 2021 for the offences under Sections 124 A and 153 B of IPC, and the investigation was only at a preliminary stage. Absolutely no special circumstances existed in the case on hand, the statement read.

Why the Case was Registered:

The Administration justified the registration of the case on the ground that the petitioner made a specific offence established by law. She allegedly clarified, despite being cautioned of serious consequences against the Central Government by the anchor that she stands by what she asserted and also stated that she is ready to face any actions for making such a statement.

The primary justification was that she had acted with deliberation to cause disaffection and disorder and had consciously intended to bring the government established by law into contempt. It is submitted that there is an intent to create alienation and bring about estrangement so as to fuel discontent and unrest which is an act squarely covered by Section 124A. Her conduct was alleged to be beyond the scope of Explanations 2 and 3 under the provision as well.

The aforementioned statements were used to explain why the crime was registered for the offences under Sections 124 A and 153B.

Why they Refused to Consider her Apology

The petitioner had submitted that she had later apologised for the remarks she made on the media channel and that no charge would life against her for the reason that her remarks did not spark any violence.

To this, the Administration responded that although she later made certain clarifications and justifications, this was probably an afterthought to get rid of the penal consequences, and asserted that such actions will not absolve the criminal liability for the offence already committed.

Regarding the argument that her remarks did not incite violence, the statement clarified as such:

"There is no requirement of any imminent violence to sustain a charge under section 124 A as canvassed by the petitioner. A careful reading of the judgment of the Hon'ble Supreme Court in Kedarnath Singh's case reveals that the quality of the seditious act alleged is to be tested on its potential to lead to violent repercussions. The offence would be completed if the words complained of have a tendency of creating public disorder by violence. The Apex Court has not laid down in Kedarnath's case or any time later that to attract the offence under S. 124 A it is necessary that actual violence should have been resulted consequent to the seditious act. The offence under 124A gets completed once anyone by words, either spoken or written, or by signs, or by visible representation, or otherwise, brings or attempts to bring into hatred or contempt, or excites or attempts to excite disaffection towards, the government established by law in India. The offence under section 124A is not conditional on any subsequent developments for its completion."