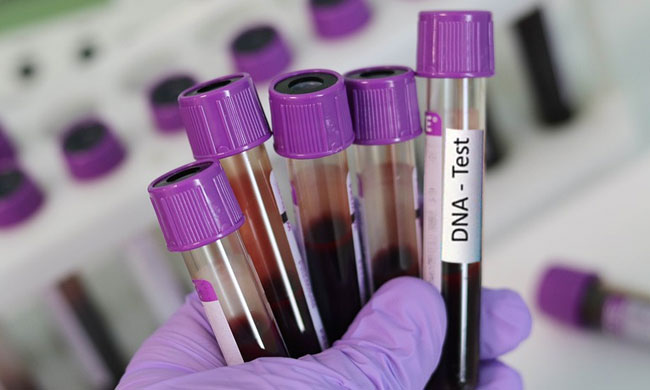 x
"The doctor gave evidence that there is no possibility for the petitioner (husband) to have the child. The doctor further deposed that before issuing the certificate, the semen test of the petitioner was conducted."

The Kerala High Court on Tuesday allowed a man's plea for the DNA test of a child born during the subsistence of his marriage to establish his allegations of infidelity against his wife in the divorce proceedings initiated by him.

A Division Bench of Justice A. Muhamed Mustaque and Justice Kauser Edappagath was considering a question of whether a direction can be given for a DNA test of a child in divorce proceedings to establish the husband's claim of infidelity by the wife without the minor being a party array.

The court said that such a direction can be issued only if the person seeking the DNA test has made out a strong prima facie to support his claims.

The petitioner-husband had moved the Family Court seeking dissolution of marriage on the ground of cruelty, desertion and adultery and for recovery of money and gold ornaments respectively.

The respondent-wife had also approached the Family Court seeking recovery of money and ornaments. A joint trial was therefore ordered in the matter.

The main allegation of the petitioner was that his wife has been leading an adulterous life with her sister's husband and that the child born to her was theirs.

To prove his wife's infidelity, the petitioner sought to conduct a DNA test of the son and himself.

However, the trial court dismissed the application on the ground that the child is a necessary party to the petition and without the child on the party array, its paternity and legitimacy cannot be determined.

Although the petitioner filed impleading applications subsequently, they were dismissed by the trial court citing delay in filing them.

The marriage in question was solemnised on 5th May 2006 and the child was born on 9th March 2007.

The petitioner alleged that the child was born out of the illicit relationship between his wife and her brother in law, although in the birth certificate of the child, the petitioner is shown as the father.

However, he submitted that he was employed in military service, he had left for Ladakh 22 days after the wedding.

He claimed that during those 22 days and thereafter, there was no physical relationship between them due to the non-cooperation of his wife.

He also took a specific plea that he was suffering from infertility and incapable to have a child.

To support his claim, he produced an infertility certificate, which disclosed that he suffered from oligoasthenoteratospermia -- a condition that includes low sperm number, low sperm motility and abnormal sperm morphology - the commonest cause of male infertility.

The application to conduct a DNA test was thereby filed to prove that he is not the father of the child and to accordingly substantiate his assertion of infidelity and adultery.

He submitted that it would be impossible for him to establish and confirm the assertions made by him in his pleadings if not for the DNA test.

The has made out a strong prima facie case to raise presumption against legitimacy.

The petitioner was represented by Advocate Sindhu Santhalingam.

Advocate Brijesh Mohan appeared for the respondent and argued that according to Section 112 of the Indian Evidence Act, once the validity of a marriage is proved, then there is a strong presumption about the legitimacy of children born from that wedlock and the presumption can only be rebutted by strong and conclusive evidence.

It was submitted that even the evidence of adultery by the wife by itself is not sufficient to repel this presumption and will not justify the finding of the illegitimacy if the husband has had access.

The counsel added that it is settled that no one can be compelled to give a sample of blood for analysis.

Reliance was placed on Goutam Kundu v. State of West Bengal & Anr [AIR 1993 SC 2295] where the Supreme Court held that according to S.112, the presumption arising thereunder can only be displaced by a strong preponderance of evidence and not by a mere balance of probabilities.

It was further held that there must be a strong prima facie case in that the husband has established non-access in order to dispel the presumption arising under S.112.

The Court noted that depending upon the facts and circumstances of the case, it is permissible for a court to direct the holding of a DNA examination, to determine the veracity of the allegations constituting the grounds for divorce if a strong prima facie case is made out.

"DNA test result of the child, no doubt, would be the best piece of evidence to substantiate the said allegation. The opinion of a DNA expert is relevant u/s 45 of the Evidence Act."

Therefore the bench held that when the husband seeks dissolution of marriage alleging adultery or infidelity on the part of the wife disputing the paternity of the child born during the subsistence of their marriage, it can order a DNA test to establish his assertion of infidelity or adultery without expressly disturbing the presumption contemplated u/s 112 with regard to the legitimacy of the child provided a strong prima facie case is made out for such a course.

Taking account of the facts of the case at hand, the Court noted the following:

"The doctor gave evidence that there is no possibility for the petitioner (husband) to have the child. The doctor further deposed that before issuing the certificate, the semen test of the petitioner was conducted."

This is a strong prima facie circumstance in support of the case of the petitioner that he is not the biological father of the child, the Court noted.

It also noted that when the Family Court at Nedumangad passed an order for the DNA test on the husband's request, during the wife's plea seeking maintenance for the child, she had failed to comply with the direction.

This was found to be yet another strong prima facie circumstance.

"For all these reasons, we are of the view that the petitioner has made out a strong prima facie case to order a DNA test. DNA testing is the most authentic and scientifically proven means to establish paternity and thereby, prove the case of infidelity and adultery set up by the petitioner," the Court added.

The Bench also held that in a petition filed by the husband seeking dissolution of marriage alleging adultery or infidelity on the part of the wife, by disputing the paternity of the child born during the subsistence of their marriage, the minor is not a necessary party.

"In such a petition, the court can order a DNA test to establish the husband's assertion of infidelity and adultery on the part of the wife without the child in the party array if a strong prima facie case is made out," it said.

With the observation, the Court set aside the Family Court's order dismissing the husband's plea for a DNA test of the child.

Allowing the husband's appeal, the Court directed that the DNA test be conducted at the Rajiv Gandhi Centre for Biotechnology.