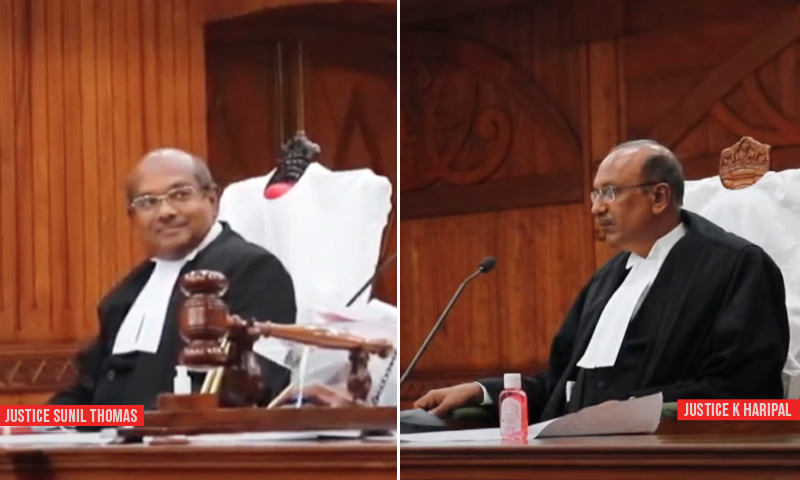 The Kerala High Court on Friday bid farewell to two of its judges - Justices Sunil Thomas and K Haripal, before parting for summer vacation. A reference was organized in the court of the Chief Justice for their farewell and the event was live-streamed on YouTube.The farewell commenced with Advocate General Gopalakrishna Kurup K addressing the gathering. He pointed out that...

The Kerala High Court on Friday bid farewell to two of its judges - Justices Sunil Thomas and K Haripal, before parting for summer vacation. A reference was organized in the court of the Chief Justice for their farewell and the event was live-streamed on YouTube.

The farewell commenced with Advocate General Gopalakrishna Kurup K addressing the gathering. He pointed out that the scheduled dates of superannuation of these judges fall on the 10th and 9th of May respectively.

"This reference is a tad early, about a month in advance, but their Lordships deserve a send-off in the glare and pomp of a fully functional court."

This was followed by a short address by the President of the Kerala High Court Advocates Association, Advocate Rajesh Vijayan. Thereafter, Chief Justice S Manikumar delivered his address, speaking of both the judges who are due to retire in a month.

"The legacy sometimes continues and in the case of Justice Sunil Thomas, the legacy is continuing in the form of his son also joining the profession. His father Justice Sunil Thomas enrolled himself in 1983, the same year that I enrolled as a lawyer... He served as registrar of the Supreme Court for 7 years, perhaps the longest period held by any Registrar in the entire country. He worked under 4 Chief Justices of India. This shows his wonderful administrative capacity."

Justice Thomas entered judicial service as District judge in 2001, served as Additional District and Sessions Judge, Thrissur, till 2005, at Palakkad from 2005 to 2007 and Registrar of Supreme Court from 2007 to 2014.

The Chief Justice said that after being made a judge in 2015, Justice Thomas disposed of several thousand cases; 21088 as single bench, 873 in the division bench, and 5 in the full bench. He has rendered several landmark judgments and was a part-time lecturer in many institutions, it was recalled.

While speaking of Justice Haripal, the Chief Justice highlighted that Justice Haripal has a unique distinction in the court since it is the second time in the history of this High Court that a former staff of the court was elevated as a judge, after Justice R Narayana Pisharadi. Justice Haripal was working as Registrar of Kerala High Court before being appointed as an Additional Judge. He has a lesser stint of only two years but had managed to dispose of several landmark cases.

Before parting, the Chief Justice quoted the words of Mahatma Gandhi, "There are no goodbyes for us. Wherever you are, you'll be in my heart."

This was followed by Justice Sunil Thomas delivering a speech on his long journey in the field. Justice Thomas was appointed as the Additional Judge of the High Court of Kerala on 10.04.2015 and became permanent from 5 April 2017

"When I demit my office after being a judge of this great institution for more than 7 years and thereby bring to an end my judicial career of 21 years, the emotion that predominates my mind is one of complete contentment. I am proud to have been a part of the best district judiciary in the country."

Justice Thomas also pointed out his gratitude for all who supported him in his journey and how grateful he was for being offered the privilege of sitting in several jurisdictions during his tenure.

Justice K Haripal then addressed the gathering reminiscing all the pleasant surprises he was blessed with in his path.

"This is the ending of a long bonding with this institution that started more than 4 decades back in 1981. After my graduation in MA, I responded to a notification for the post of Assistant in the High Court. Courts were always in my dreams. The day I came back home with an order of appointment was the beginning of a series of pleasant surprises."

Justice Haripal said that it was a great learning experience for him while hoping that he met the expectations of the Bar. He thanked several judges of the Supreme Court and many High Courts across the country for their support.

"This is a seat occupied by many stalwarts like Justices MS Menon, PT Raman Nair, VR Krishna Iyer etc. I request that I may not be compared with any of them or other eminent judges of this court, both sitting or former."

The retiring judge also mentioned that great judgments are rendered only with the inputs given by the appearing lawyers of both sides.

Our High Court is blessed with a large number of eminent lawyers who come after doing a lot of homework. The learned AG and ASGI can be proud that they have lined up a battalion of devoted law officers on their side who are capable of protecting the interest of the state and the citizenry, the Judge concluded.