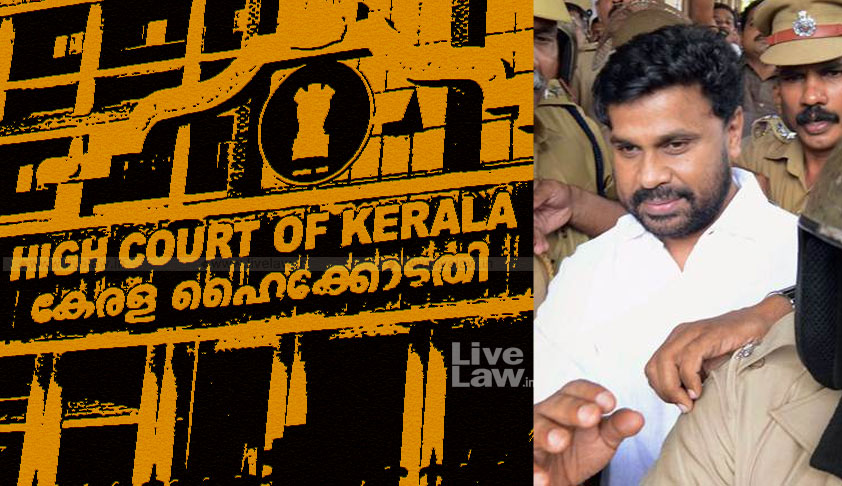 The Kerala High Court on Tuesday directed the State Police Chief to enquire into the allegations raised by actor Dileep that the media was flouting the trial court's order restricting the publication of matters related to the 2017 actor assault case till the conclusion of the trial.Justice Kauser Edappagath remarked that the allegations if found to be true, should be handled with prompt action...

The Kerala High Court on Tuesday directed the State Police Chief to enquire into the allegations raised by actor Dileep that the media was flouting the trial court's order restricting the publication of matters related to the 2017 actor assault case till the conclusion of the trial.

Justice Kauser Edappagath remarked that the allegations if found to be true, should be handled with prompt action as prescribed by law:

"The instances pointed out by the petitioner cannot easily be brushed aside. The order passed under Section 327(3) of CrPC is to be honoured. Hence, the 1st respondent (State Police Chief) shall conduct an enquiry into the allegations in this writ petition regarding the flagrant violation of the trial court order. Needless to say, if any such allegation is found to be true, appropriate action under law shall be initiated."

The Judge also issued notice to ReporterTV and posted the matter to be heard after 3 weeks.

The Court was adjudicating upon a petition seeking a directive to the State Police Chief to ensure strict compliance with the order of the Additional Special Sessions Judge prohibiting the printing and publication of proceedings of the case.

While adding that action may be initiated upon receiving a complaint, the DGP argued that there was an alternate remedy available to the petitioner before the trial court.

To this, Senior Advocate Krishnanunni appearing for the petitioner responded that due to the lack of a Prosecutor at the trial court for this case, the matter was not making any progress and that it is merely getting adjourned.

The DGP added that the State Police Chief could not possibly identify violations since the media was only prohibited from reporting whatever transpires with the trial court. He argued that it was not viable for the SPC to be aware of what happens in the trial court in the matter.

Nevertheless, the Court directed the State Police Chief to enquire into the allegations and a file a report on the same before the next posting date.

The grievance of the petitioner was that as soon as trial commenced in the case, media houses started publishing parts of witness depositions, which according to him, was a misrepresentation of the facts deposed by the witnesses.

Citing that such publication was in clear violation of the mandate under Section 327(3) of the Code of Criminal Procedure, he challenged the same before the Sessions Court, which issued the aforementioned order.

In its order, the Sessions Judge had perused the Apex Court decision in Nipun Saxena & Anr v. Union of India & Ors [2019(2) SCC 703] where it was held that although there can be reporting of cases under Section 327(2) CrPC, such reporting may not include what transpired inside the court hall or the statements of the victim or witness.

Placing reliance on the guidelines laid down in this decision, the Sessions Court had issued a direction that nobody shall print or publish the proceedings in the case except the matters permitted in the Apex Court decision.

However, the petitioner pointed out that despite court orders, the media resorted to the publication of matters in gross violation of Section 327(3) of CrPC.

According to the actor, such publication was made at the instance of the Investigating Officer and it was for this reason that he had avoided taking any steps against those who engaged in such violations.

The petition was filed particularly challenging the exclusive interview conducted by ReporterTV with film director P Balachnadra Kumar on 25th December 2021, which had brought about a new perspective to the case

In this interview, the director had claimed to have knowledge of several issues pertaining to the case and had asserted the guilt and involvement of the petitioner in the case pending trial. This discussion was telecasted multiple times that day on TV, according to the petitioner.

Additionally, it was contended that the said news channel has been telecasting news programmes every day since the interview fabricating further allegations against the petitioner about sub judice matters in the ongoing trial.

The interview had brought about ground-breaking disclosures that opened a separate trail of litigations altogether. After Balachandrakumar's statements, the prosecution had sought to recall witnesses and to summon additional witnesses in the case before the trial court.

The apprehension of the petitioner is that such instances were developed with a deliberate intention to prejudice the mind of the public against him and to influence the outcome of the trial. He also suspects the Investigating Officer's involvement in the same.

The actor pointed out that such programmes of ReporterTV amount to interference with the administration of justice, prejudicing the trial, scandalising the court and a parallel media trial, thereby amounting to criminal contempt.

A petition challenging the same was filed before the Sessions Court, however, this is still pending since the parties had agreed that this could be decided after the examination of the witnesses.

However, the Sessions Court had issued notice to the respondents in the matter. Despite receiving notice, ReporterTV has allegedly continued to telecast details of the in-camera trial conducted by the Court.

It is further submitted that witnesses who deposed before the Court came forward in the channel and made statements and comments about the evidence in the case. He added that concocted stories about him and the advocates appearing on behalf of him were been repeatedly telecast by Reporter TV.

The petitioner added that all media - print, digital and social media - were now printing and publishing matters which amount to criminal contempt, in violation of section 327(3).

Despite being duty-bound to proceed against such violation, the actor pointed out that the State and the Investigating Officer had initiated no action whatsoever in the matter.

The petitioner argued that he was now facing trial by the media engineered by the Investigating Officer who was legally bound to ensure that a free and fair trial of the case was conducted.