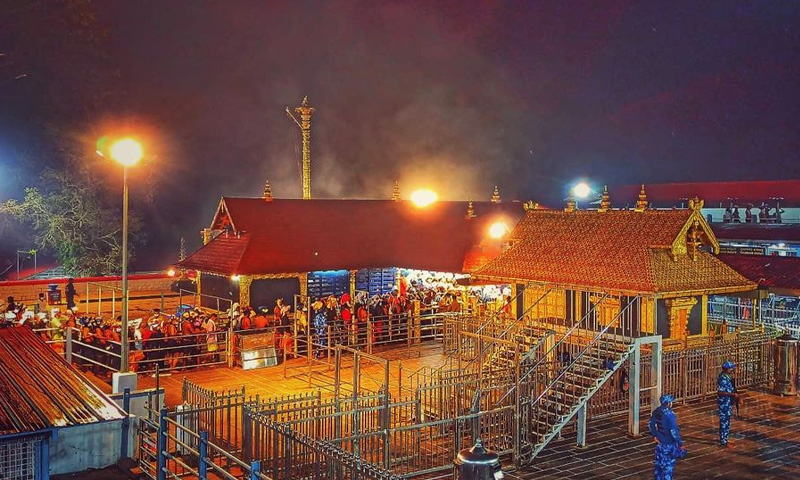 The Kerala High Court has directed the State and the Travancore Devaswom Board (TBD) to broadly promulgate the facilities recently made available to Sabarimala pilgrims to facilitate entry to more devotees to the temple and to attend darshan therein, in view of the two month pilgrimage season.In a suo moto matter taken up based on the Sabarimala Special Commissioner's report, the Division...

The Kerala High Court has directed the State and the Travancore Devaswom Board (TBD) to broadly promulgate the facilities recently made available to Sabarimala pilgrims to facilitate entry to more devotees to the temple and to attend darshan therein, in view of the two month pilgrimage season.

In a suo moto matter taken up based on the Sabarimala Special Commissioner's report, the Division Bench of Justice Anil K. Narendran and Justice P.G Ajithkumar in its order observed:

"The State and also Travancore Devaswom Board (TDB) to give wide publicity through print and visual media about the facilities available to pilgrims, so that more number of devotees can have Sabarimala Darshan. In case of any difficulties faced by the devotees, it is for the officers concerned to report the said facts to the Special Commissioner or the Executive Officer so as to enable them to bring it to the notice of this Court for appropriate orders."

What Are The New Facilities Made Available For Sabarimala Devotees?

The report stated that pilgrims coming by long-distance buses are offloaded at Nilakkal for verification of virtual-Q coupons and Covid vaccination/test certificates, which according to the Special Commissioner generates significant delay. He had, therefore, suggested that more verification centres be opened.

The State Attorney submitted that in addition to nine verification centres, three more centres are to be established at Nilakkal to verify virtual-Q coupons and Covid vaccination certificates. Besides, it was submitted that four more spot-booking centres at Thripunithura, Kodungallur, Chottanikkara and Thiruvilwamala respectively are being opened under the Cochin Devaswom Board.

The report cited referred to complaints from pilgrims that Kerala State Road Transport Corporation (KSRTC) is collecting excess fares from them and not providing an adequate number of buses.

In this regard, the KSRTC Standing Counsel submitted that as per a Government Order dated July 7, 2020, in respect of service operated in connection with Mandalapooja at Sabarimala, during the two months of November and December, KSRTC may "realise" 30 per cent of the rates, in addition to the rates of fares fixed for the respective class of services.

Going by the said order, the KSRTC is entitled to collect ₹56 and ₹106 as fare for AC and non AC buses respectively. However, it is charging only ₹50 and ₹80, he added.

TDB Standing Counsel pointed out that the number of pilgrims having darshan at Sabarimala per day is now in the range of 38,000–40,000.

The State Attorney submitted that a decision shall be taken in a joint meeting of all concerned, including the TDB, on the question as to whether the number of pilgrims permitted to visit Sabarimala per day is to be hiked.

In a statement filed on behalf of the KSRTC, it was stated that 80 non AC buses and 40 AC buses are allotted for Nilakkal-Pampa services and an additional crew of 10 drivers and conductors are posted for the said service due to an increase in the number of pilgrims.

Regarding group booking on the virtual-Q platform, the State Attorney submitted that the facility was stopped after it was misused by certain travel agencies. Nevertheless, it has been decided that pilgrims from other States in a group of 40 - 50 persons, holding virtual-Q coupons, will be permitted even beyond the time limit prescribed in the respective coupons, subject to the availability of open slots.

The KSRTC Standing Counsel submitted that if any request is made by groups minimum of 40 members, they will be permitted to be carried in a single bus from Nilakkal to Pampa and back. Such groups will also have the facility for online booking through the KSRTC Web Portal.

Finding that the devotees were provided with adequate facilities, the Division Bench closed the matter recording the submissions made by the State government, TDB and KSRTC.