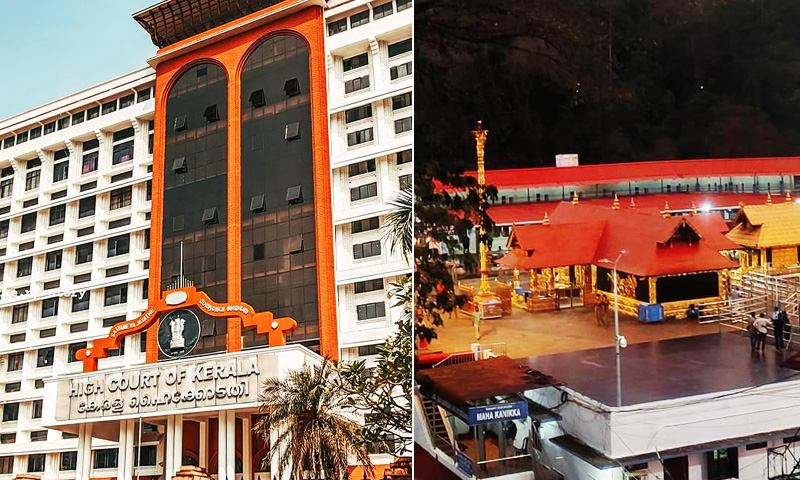 The Kerala High Court on Thursday questioned the State and its Police Force if they are empowered to manage the affairs of the Sabarimala temple, overriding the powers of the Travancore Devaswom Board that acts as a trustee of the deity.A division bench of Justices Anil K Narendran and P.G Ajithkumar was adjudicating upon a PIL challenging the legality of the 'Sabarimala Pilgrim...

The Kerala High Court on Thursday questioned the State and its Police Force if they are empowered to manage the affairs of the Sabarimala temple, overriding the powers of the Travancore Devaswom Board that acts as a trustee of the deity.

A division bench of Justices Anil K Narendran and P.G Ajithkumar was adjudicating upon a PIL challenging the legality of the 'Sabarimala Pilgrim Management System' ('SPMS') implemented by the Kerala Police, alleging that it restricts Darshan in Sabarimala to only those who avail the Virtual Queue Services.

"What is the role of the government in managing the functions of a temple?  Can this be decided between the government and the police without obtaining orders from the necessary authority? At any point in time, did you obtain any necessary permission from the Devaswom Board? The Board, being a trustee, should manage all the affairs of Sabarimala like in the case of all other temples."

State Attorney N. Manoj Kumar submitted that the government was only concerned with crowd management and that the virtual queue system was implemented to address this  issue. He added that such measures taken for crowd management were implemented by the police department in consultation with the Devaswom Board.

"The virtual queue system is being implemented only to help the pilgrims and to facilitate easy Darshan in the temple. I fail to understand why the petition is finding fault with it. The police and the government have no other intention or interest in the scheme," the State Attorney remarked.

"Have you brought it to the notice of the court that you have permitted the police to publish advertisements to generate revenue on a portal intended for devotees to book for a Sabarimala darshan?" the petitioner's counsel said.

When the State Attorney replied that he thought the court was also aware of such activities, the Bench was quick to respond:

"Don't say that you think the court is aware. The question is if you brought to the notice of the Court."

As per the official website, the single digital platform for SPMS is developed and facilitated by a private agency namely Tata Consultancy Services, Hyderabad. The State contended that the advertisements were published in an attempt to pay back the pending 10 lakh rupees payable to TCS for the functioning of the portal.

The affidavit filed by the respondent had cited an order of the previous division bench as a reason to continue with the system. The Court today asked the State if there was a specific order that permitted it to place such a system and to proceed with it.

The State responded that the virtual queue system was not a new scheme and that it had been implemented since 2011. Over 75 lakh pilgrims have already utilised the facility over the years, and its sole purpose was to facilitate smooth Darshan without having to make the devotees wait in queue for long hours.

It added that it was only due to the pandemic that it was made mandatory last year. Otherwise, both the systems were working simultaneously.

However, the petitioner's Counsel Advocate Abir Phukan argued that the platform was in the name of the Kerala Police and not the Devaswom Board. The Court agreed with the petitioner and recorded that it ought to have been in the name of the Board and that the Board being only a trustee of a deity who is a perpetual minor, cannot even agree to such an arrangement, thereby nullifying the arguments of the respondents.

The State clarified that the Kerala Police only handles the matter of virtual queues and that every other activity of the Sabarimala temple were handled by the Board itself.

The Counsel for the petitioner vehemently asserted that the website clearly revealed that its objective was well beyond crowd management. He argued that the data of the pilgrims will be used for analytical purposes and for artificial intelligence. According to him, this disclosed a clear objective of having an all-pervasive surveillance system in place.

He added that as explicitly stated by the State, the portal is managed by TCS, a third-party agency, and not even the Kerala Police has control over the data that is entered in the website. The Counsel demanded that the agreement entered into between TCS and the Police be produced to comprehend their terms.

It was also brought to the attention of the Court that passes have already been issued to the devotees who booked through the portal, and the petitioner requested that a clarification be issued that these passes are subject to the decision of the court. The bench, however, denied doing so as it could potentially lead to confusion among the pilgrims.

Nevertheless, the Court stood firm in its opinion regarding the government's authority in these matters:

"We made ourselves very clear. If this system (Sabarimala PIlgrim Management System) was introduced based on any order of this Court, you have to produce it before us."

The Court added that in so far as the amount made by the TCS is concerned, it is part of their corporate social responsibility.

The TCS officer was accordingly impleaded as the 5th respondent in the case. The Travancore Devaswom Board and the Kerala Police filed their affidavits in the matter. The State sought time to file its affidavit. The court thereby posted the matter on Tuesday for further hearing.

The petitioner claimed that for availing the impugned service, a devotee has to provide personal information including name, age, address, contact number, photograph, details of photo identity cards etc., without any assurance regarding the protection of their privacy or safety of the data so collected.