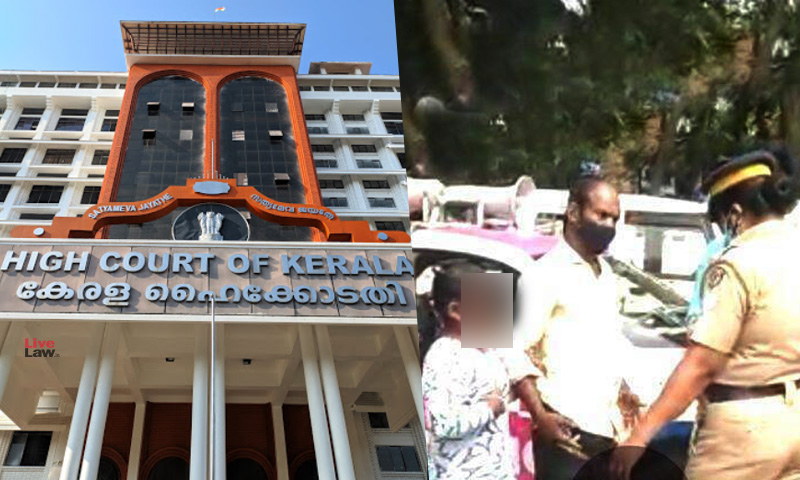 A minor girl has approached the Kerala High Court to invoke its jurisdiction as the sentinel on qui vive and the parens patriae doctrine to protect her basic fundamental right to live with human dignity after she was humiliated in public by the Pink Police. The 8-year-old petitioner who was falsely accused of stealing a mobile phone from a Civil Police Officer named Rejitha moved the...

A minor girl has approached the Kerala High Court to invoke its jurisdiction as the sentinel on qui vive and the parens patriae doctrine to protect her basic fundamental right to live with human dignity after she was humiliated in public by the Pink Police.

The 8-year-old petitioner who was falsely accused of stealing a mobile phone from a Civil Police Officer named Rejitha moved the Court seeking a directive to the State to take stringent action against the officer for infringing her fundamental rights.

The petitioner and her father were waiting to witness the shipment of cargo containing machinery used for the construction of a tunnel at the Vikram Sarabhai Space Center.

Since the shipment attracted crowds, a police force, including a pink patrol squad, was deployed to control the crowd. The pink patrolling vehicle was parked three metres from her father's scooter.

Feeling thirsty, the petitioner and her father went to a nearby shop for some drinking water.

To their astonishment, the accused rushed to them, yelling at the duo to return her mobile phone, which according to her, was stealthily removed by them.

When they denied any involvement in the incident, she proceeded to humiliate them with 'coloured remarks' and 'disparaging comments'.

The petitioner has also accused the Civil Police Officer of attempting to disrobe her and her father in the guise of a search. She argues that she was intentionally insulted and intimidated with an intent to humiliate her in front of the public.

According to the plea, the girl was threatened with dire consequences that she would be taken to the police station and be subjected to a physical examination.

Intimidated, the petitioner started crying out aloud. She saw a huge crowd gathering around her and this subjected her to fear, humiliation and grave mental agony.

Meanwhile, a fellow police constable recovered the phone from accused Renjitha's bag which was kept in the patrolling vehicle itself.

Considering that the petitioner belongs to a Scheduled Caste community, the plea alleged:

"Therefore, the attempt of the 4th respondent was to falsely implicate the Petitioner and her father, to humiliate and intimidate them in public view and the disparaging coloured remarks makes it apparent that the same was intentional attracting offences under Sections 3(1)(x) of the Scheduled Castes and Scheduled Tribes (Prevention of Atrocities) Act, 1989."

The petition also reveals that the officer's action left the child traumatised, requiring medical attention. She couldn't sleep or attend her online classes for around 2 weeks as per the plea.

"Even the mere sight of Khaki uniform of even KSEB employees made the petitioner shiver with fear."

As a result of the harrowing experience, she was admitted as an inpatient at the mental health centre in September 2021, and underwent follow-up counselling on another day.

Accordingly, her father complained to the investigating officer and the State Commission for SC and ST.

The commission found Renjitha's action to be violative of the principles of natural justice and amounting to infringement of her fundamental right to live with dignity under Article 21 of the Constitution.

However, no action has been taken by the police in this regard. Drawing conclusions from a media report, the petitioner alleged that there is a concerted effort on the part of the official respondents to protect the accused Pink Police officer.

In her plea filed through Advocate A.K Preetha the petitioner had highlighted the inaction on the part of the State and other respondents against the said officer who had publicly humiliated her by trying to implicate her in a case of theft, thereby infringing her fundamental right to equality and right to live with dignity.

The petition seeks exemplary action against the accused officer and a declaration that her actions violated the fundamental rights of the petitioner.

The girl has also sought a declaration that the State government is vicariously liable to pay a compensation of Rs 50,00,000 as public law remedy for the tortious act of the officer.

Alleging all the actions of the accused to be illegal and violative of the very basic Fundamental rights, the petitioner has sought the Court's intervention in the matter.

"The rigour of the violation is even more when a public servant deputed to aid and assist women and children acts in a highhanded manner."