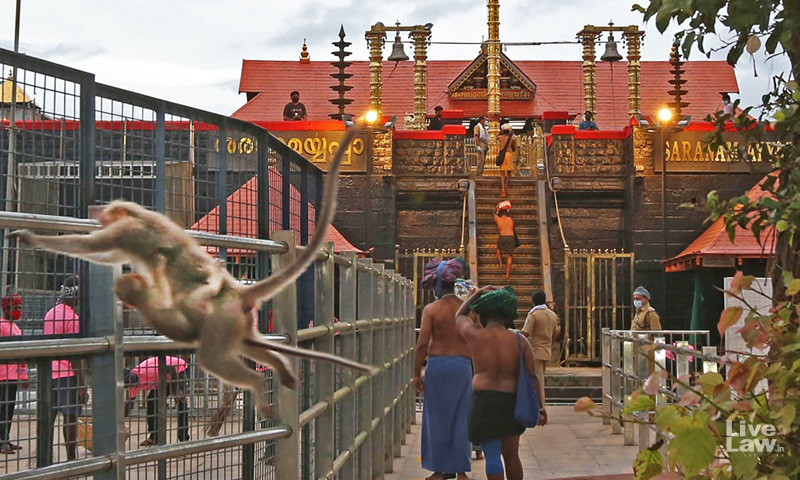 A Public Interest Litigation (PIL) has been filed before the Kerala High Court questioning the legality of the 'Sabarimala Pilgrim Management System' ('SPMS') implemented by the Kerala Police, alleging that it restricts Darshan in Sabarimala to only those who avail the Virtual Queue Services.The Virtual Queue, as per the website maintained by the Police Department, is "a limited...

A Public Interest Litigation (PIL) has been filed before the Kerala High Court questioning the legality of the 'Sabarimala Pilgrim Management System' ('SPMS') implemented by the Kerala Police, alleging that it restricts Darshan in Sabarimala to only those who avail the Virtual Queue Services.

The said system purportedly includes management and issuance tickets to the devotees who seek to take darshan at Sabarimala. As per the official website, the single digital platform for SPMS is developed and facilitated by a private agency namely Tata Consultancy Services, Hyderabad.

A Division Bench of Justices Anil K Narendran and K Babu sought details regarding the privacy of data submitted by the devotees who opt for the virtual queue system. The Court also inquired if such details furnished by the devotees are accessible to the private entity managing the website.

The petitioner is a Hindu and claims to be an ardent devotee of Lord Ayyappa. He claims that for availing the impugned service, a devotee has to provide personal information including name, age, address, contact number, photograph, details of photo identity cards etc., without any assurance regarding the protection of their privacy or safety of the data so collected.

"Shockingly, the website admits that the data collected will be used for analytical purposes," the plea reads.

Further, the petitioner is aggrieved by the fact that the devotees are mandated to download and print their barcoded e-tickets "mentioning the date and time slot allotted for Ayyappa darshan".

He alleged that in the pretext of facilitating the crowds, the State and the Police were effectively usurping the role and powers of the Travancore Devaswom Board for malafide reasons in a completely non-transparent and arbitrary manner.

While booking via the Virtual Queue system ought to have been optional, the same has been made mandatory for visiting the shrine, the plea states. The non-transparent and arbitrary manner in which the system is made to function, it is submitted, would also result in a situation where the State and the Kerala Police can selectively pick and choose the persons who can be permitted darshan.

"By allowing the Kerala Police to take over the issuance of 'Darshan Tickets' and manage the Temple, Respondent No.3 has, among others, committed a breach of trust."

While arguing for the petitioner, Advocate Abir Phukan submitted:

"In the guise of regulating the entry of pilgrims, there is a system of complete surveillance, acknowledged in the website of Kerala Police. One of the achievements of the project is a database containing details of lakhs of pilgrims which can be used for analytical purposes."

Therefore, the petitioner had prayed that virtual queue be made an option to visit the temple and a directive to the effect that the Kerala Police are not authorised to issue Virtual queue booking coupons.

The Sabarimala shrine is mainly open during the Mandalam season between November to January and a few days at the beginning of each Malayalam month and attracts devotees from across the world with no restriction on caste or creed, particularly during the festive season.

Considering the ongoing pandemic, the State had decided to restrict the pilgrim movement to the temple this year.

Pursuant to chairing a top-level meeting on the issue of regulating the Sabarimala pilgrimage, Chief Minister Pinarayi Vijayan had proposed to implement a virtual queue system for booking darshan at the temple in advance.

To book for the same, pilgrims are required to register their name, address and other particulars on the portal, which is run by the police department.