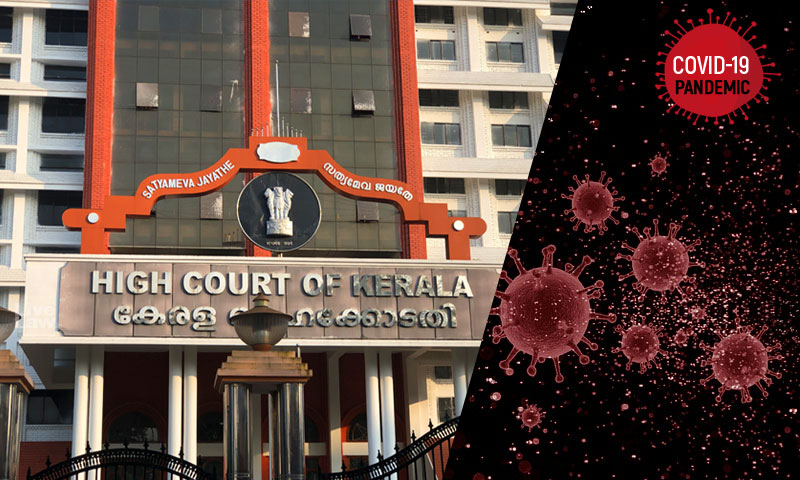 "The petitioner is … approaching this Hon'ble Court seeking affirmation that the constitutional principles of right to life, equality and dignity, taught to generations of lawyers by teachers like Prof. Mallar, continue to operate during difficult times such as these." A fourth writ petition has been filed in the Kerala High Court challenging the Liberalised Pricing and...

"The petitioner is … approaching this Hon'ble Court seeking affirmation that the constitutional principles of right to life, equality and dignity, taught to generations of lawyers by teachers like Prof. Mallar, continue to operate during difficult times such as these."

A fourth writ petition has been filed in the Kerala High Court challenging the Liberalised Pricing and Accelerated National Covid-19 Vaccination Strategy (policy) announced by the Union Government.

The petitioner, a lawyer named Mathew Nevin Thomas, at the outset of the petition states -

"COVID-19 is also claiming people's lives at an alarming rate, including that of the late Prof. Varadaraja Shivaraya Mallar, the Petitioner's former Constitutional Law teacher at the National Law School of India University, Bengaluru. The petitioner herein, whose constitutional aspirations were framed by the teachings of Prof. Mallar, is approaching this Hon'ble Court seeking affirmation that the constitutional principles of right to life, equality and dignity, taught to generations of lawyers by teachers like Prof. Mallar, continue to operate during difficult times such as these."

The petition argues that vaccines rolled out in the state have to be provided on a reasonable and equitable basis, in keeping with the right to health and medical care.

"The 1st Respondent's Ext.1 Liberalised Strategy goes against this fundamental proposition and is thus ultra vires Article 21. This further falls afoul of the directive principles applicable to the 1st Respondent, enshrined in Articles 47, 38, 39(b) and 39(c) of the Constitution", the petition reads.

Therefore, the petitioner seeks a quash on the policy and directions to the Centre to

Additionally, the plea seeks from the state of Kerala a status report on number of vaccine doses, number of vaccinated persons thus far, the funds required and allocated in this respect, among other prayers.

The plea, filed through Advocate Santhosh Mathew and advocates of Ninan and Mathew Advocates, takes the stand that the policy run counter to the Universal Immunisation Plan and National Vaccine Strategy which raised a legitimate expectation that the vaccines would be procured by the Centre and distributed down the chain to the public free of cost and universally, in a gradually phased manner.

Arguing that the Policy imposed the burden of procuring vaccines on the state at short notice, the plea raises a specific concern that the states may even have to bypass their own procurement processes and safeguards in obtaining doses of the vaccine.

Another concern raised is that multiple procurement channels and supply chains would unnecessarily duplicate and slow the process of vaccine distribution.

"Unlike private players who can distribute the vaccines at cost or on a for-profit basis, state governments will now need to supplement the supplies arriving from the 1st Respondent with their own procurement, and will be compelled to distribute what they procure for free at their own cost in order to ensure that people who cannot afford to buy the vaccines are also immunized. For a small State like Kerala, which had to face severe natural calamities by way of unprecedented floods and rainfalls with its depleted State exchequer, notice of a mere 10 days is not sufficient for this, which is evident from the fact that state governments have only just begun to place orders with the 7th and 8th Respondents…," it is stated.

The petitioner takes issue to the differential pricing strategy followed in the vaccine rollout whereby the Centre, the States, private hospitals pay differing sums to procure the vaccine and vaccinations to those in the 18-45 age bracket are charged. It is asserted that the policy goes against the 'One Drug, One Price' system followed thus far.

The petition in this respect states,

" The impugned Ext. P1 Liberalisation Strategy also puts in place a completely arbitrary price fixation process, where the 1st Respondent has secured its own self-interest by obtaining 50% of vaccine doses from the 7th and 8th Respondents at discounted fair price but allowing the manufacturers to set the price at which the remaining doses are sold to the state governments and private players. Neither the 7th or 8th Respondent has been forthcoming with any material information relating to the price fixation process, such as any insight into the costs of manufacture or their financial positions. It is estimated that the manufactures will earn tens of thousands of crores of rupees on the basis of the Ext. P1 Liberalisation Strategy. Given that at present these manufacturers are monopolists, it is submitted that they are abusing their position in the market to price gouge."

It is also contended that the legal framework under which the Policy was announced is unclear. Vaccines which typically fall within the legislative entry of public health is a subject over which the state government has legislative competence, it is stated. If the policy was issued under the Disaster Management Act, the provisions along with the consultation process under the said legislative were to apply, the petition avers.

Again, arguing that it was unclear why state governments and private hospitals in India must be bound by it, the petition states,

"Liberalised Strategy is merely in the form of a document that has been uploaded to the website of the 3rd Respondent, and is not in the form of any Ordinance, order, bye-law, rule, regulation, notification, custom or usage having in the territory of India the force of law"

The plea also espouses the view that the policy would disincentivise people from getting a vaccine, reduce herd immunity and go against the principles of universal immunisation.

Therefore, a quash on the policy is prayed for, along with the allied reliefs discussed above.