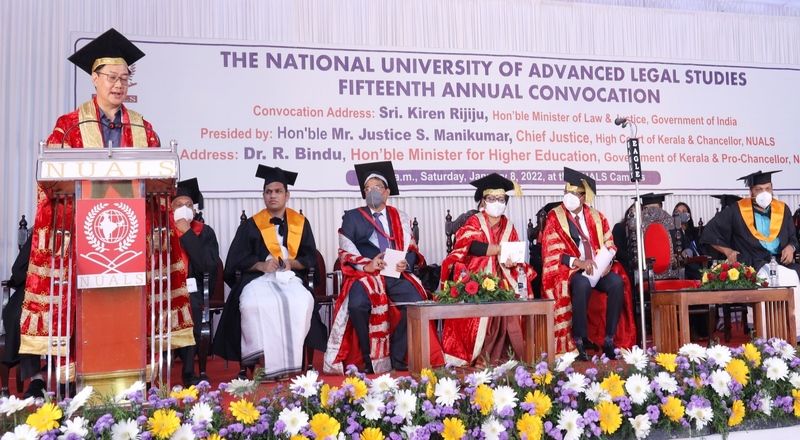 While speaking at the 15th NUALS Convocation ceremony, Kiren Rijiju, Union Law Minister for Law and Justice, remarked that close coordination between judiciary and the other two organs of the state does not necessarily amount to encroachment upon each other's independence. "People may say that judiciary is independent. Legislature and Executive are also independent in India in their...

While speaking at the 15th NUALS Convocation ceremony, Kiren Rijiju, Union Law Minister for Law and Justice, remarked that close coordination between judiciary and the other two organs of the state does not necessarily amount to encroachment upon each other's independence.

"People may say that judiciary is independent. Legislature and Executive are also independent in India in their own way. That doesn't stop us from working together. Working together is not encroaching upon other's territory. We respect the judiciary and its independence. At the same time, we also desire for a close co-ordination. I want to ensure from the Ministry of Law and Justice that nothing would be found wanting. We are forever open to suggestions and demands", commented the Union Law Minister.

On the aspect of appointment of judges, the Minister noted that the pendency of cases and the low number of judges are correlated.

"A successful democracy should have a robust judiciary. The pendency of cases are huge, if you see, it is close to 4.5 crore cases. There is a challenge of the low number of judges. I have ensured that appointment of judges in HC are given full support of the Collegium and the Law Ministry is working in tandem and working very closely with Chief Justice and Collegium members so that we can handle may things, everything need not be confined to files and formalities. We can get things done outside the formality also if we have a beautiful working relationship."

The Minister also noted that he was aware of the infrastructural challenges that the judiciary face. The Minister said that 9000 crores have been approved by the last Cabinet for infrastructural development in subordinate judiciary/ District Courts. Out of this, 40 per cent of funds will come from state government and the rest will be funded by Central Government.

The Minister noted that he has the bounden duty to ensure that the judicial system in the country is robust and take care of the interests of lawyers.

"I would like to assure the young graduates that the opportunities before you are immense. I share the full responsibility to provide better opportunities for you and your future…When I came to God's own country, the beautiful state of Kerala, I also know that Kerala is one of the most literate societies, and legally, the awareness level of Kerala is much greater than rest of the country."

About making progress in Alternative Dispute Resolution Mechanism, Minster shared his hopes that the mediation Bill tabled in the winter session of the parliament has the immense potential to open up new avenues for lawyers.

"In the mediation bill, we are not restricting it to the lawyers alone. Some of the reputed persons in society can also play the role of mediator. But it opens up a big space for the existing lawyers and we need to look into all ADR mechanism studies in law colleges and Universities… As our economy expands, the route to litigation will also expand correspondingly"

The Minister also opined that lawyers are naturally attracted to the Corporate world though there is a need to strike a balance. Related to legal services, Kiren Rijiju also praised the Supreme Court for showing 'true leadership' in the Legal Awareness Campaigns across states in the 75 week long celebrations.

"I don't want to say that lawyers should not look into commercial interest. Definitely, it drives the lawyer's profession. But you shouldn't forget the pro bono concept also. Through NALSA, a massive campaign has been launched all over the country. I have gone to all states and UTs; I must commend the Indian judiciary led by Supreme Court and all the High Courts in India. The campaign has been very successful and I have acknowledged it in the Constitution day celebration also that the SC has shown true leadership. The Digital India Concept developed by PM Narendra Modi has galvanised the whole nation. Now judiciary is not confined to court hearings. Justice cannot be only delivered from courtrooms; justice can be delivered at the doorsteps of the people. Legal Awareness Campaign on the occasion of 'Aazadi Ka Amrit Mahotsav', I never thought the court would play such a proactive role. I have also seen the reports from Kerala. The activities conducted by Kerala State Legal Services Authority (KELSA) where CJ is the patron chief shows a commendable effort. It has benefited so many people, the people who were craving for justice".

The Minister also added that he has now seen the legal system in close quarters and also identified the problems though he was not strictly from the legal background despite having a law degree.

"I am not one of those very few law ministers who is not actually from the legal background though I have an LLB Degree…After acquiring my law degree, I did not go to the court. Even then I became the Minister for Law and Justice of this country. I have never seen how a courtroom looks like, I told the CJI that I don't know how the court proceedings take place. But now, I have seen not only the system but I have also identified the problems."

In a lighter vein, Minister also said that he wants to give more time for the students to celebrate. He added that he was also going to meet the law officers of southern states this afternoon.

The Convocation was presided by Kerala High Court Chief Justice S. Manikumar who is also the Chancellor of NUALS. While the Minster gave the Convocation Address, Dr. R Bindu, State Minister of Higher Education and Pro-Chancellor of NUALS gave the special address. Along with them, the ceremony was also graced by the presence of Minister of Law and Industries, P. Rajeev, and Member of Parliament from Ernakulam Constituency, Hibi Eden, and members of the NUALS Executive Council along with other dignitaries from legal fraternity. The welcome address was given by the Vice-Chancellor of NUALS, Professor Dr K.C. Sunny.

In the convocation ceremony, a total of 180 students were the recipients of the BA LL.B (Hons.) degree, LLM and PhD. Winy Daigavane was the recipient of the Gold Medal for the BA LL.B (Hons) course while Navya Benny secured the Second rank. The medal for securing the first rank in the LLM Course was conferred on Albin Anto.