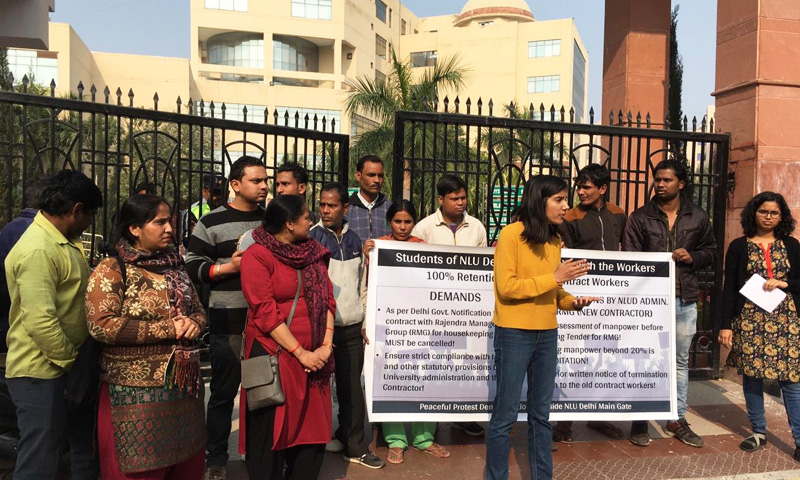 "We wish to reiterate that in the face of an unprecedented crisis, the workers have held their ground with utmost dignity and strength. The workers shall not trade respectful recognition of the hard-won outcome of their struggle for their rights, for hollow 'charity' from the University." The NLUD Workers-Students Solidarity group has turned down the "hollow offer" made by the...

"We wish to reiterate that in the face of an unprecedented crisis, the workers have held their ground with utmost dignity and strength. The workers shall not trade respectful recognition of the hard-won outcome of their struggle for their rights, for hollow 'charity' from the University."

The NLUD Workers-Students Solidarity group has turned down the "hollow offer" made by the NLU-D Administration for providing alternate employment to its former housekeeping staff and has urged the University to exercise its powers to implement the order the Delhi Labor Minister for reinstatement of staff, without causing any further delay.

In a statement issued by the group, it is stated that the said offer does not address the concerns raised by the workers time and again, and is hence unanimously turned down.

On June 27, the NLU-D administration offered to make arrangements for employment of the terminated former staff, in the nearby areas as per the applicable, reasonable, and appropriate terms and conditions.

As per the students group, a similar offer was made to the workers earlier but was promptly rejected for fear of "victimization" by the new employer and uncertainty of such employment. The present offer also, as per the students, suffers from the same "vagueness" and "lack of accountability" towards the well-being of the workers.

Further, the students state that the offer is an "abrupt" and "delayed" attempt to side-line the illegality of RMG's exploitative contract and the related concerns of the workers. The students point out that even the Delhi Labour Minister rejected the offer, after hearing the concerns of the workers and illegalities in the present contract, however,

"The present offer is made, maintaining absolute silence on illegality of RMG's contract- almost as a way of pushing the glaring illegality into oblivion," the students said.

About 55 safai karmcharis, working with White Fox or Golden Companies, were rendered unemployed after the University's contract with the Company allegedly expired. The University entered into a new contract with Rajendra Management Group (RMG), which set off a prolonged student protest, seeking that the former staff be re-instated.

While some of the workers were later employed by the new Contractor- RMG, on University's persuasion, the University had recently assured that it will make requisite arrangements for the remaining unemployed workers, on moral grounds.

In the meanwhile, the matter was also brought to the attention of the Delhi Labour Minister, who after holding meetings with all the stakeholders, directed the University to re-instate all the former workers.

The students have been demanding 100% retention of all old contractual workers and seek that the new contract with RMG be cancelled. Reminding the University administration that saving manpower beyond 20% amounts to exploitation, the students insisted that the University should strictly comply with all labour laws and other statutory provisions.

Giving a factual position of the matter on June 22, the University said that it hired the services of house-keeping staff through a contractor in 2008, without any legal requirement for assessment of manpower requirement. However, guidelines for the same were issued by the Delhi Government in 2012, pursuant to which the State Audit Team as well as the CAG Audit Team asked the University to float fresh tender for outsourcing the services of safai karmcharis.

It was stated that following the norms to assess the requirement of safai karamcharis, the University had to a float fresh tender, which was awarded to the present contractor RMG. Further, since the tenure of earlier contractor White Fox and Golden was over, its manpower was withdrawn, and there was no illegality in the new contract. The matter is still pending consideration of the University Chancellor.

The students have rejected the University's offer and have remarked,

We insist that the University administration channel their efforts towards expediting the implementation of the present directions of the Hon'ble Labour Minister. Kindly let us know what is the progress with respect to the implementation of the Directions dated 17.06.2020, and what is the stage of deliberations before the EC/GC members. Also, kindly make public the details of the representations made to the members of the Executive/Governing Council, and the Hon'ble Chancellor."