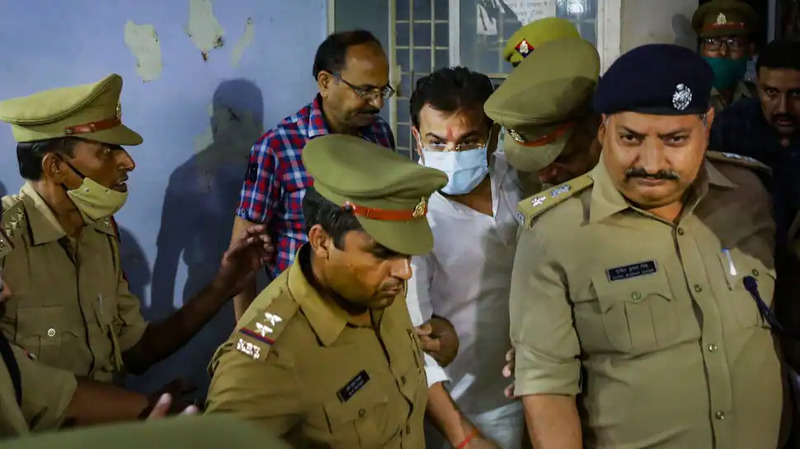 Union Minister of State for Home Ajay Misra 'Teni's son and prime accused in the Lakhimpur Kheri Violence incident, Ashish Misra has been sent to 14-day judicial custody following his arrest by the UP Police yesterday at around 11 PM.As reported by ANI, Uttar Pradesh would be filing an application tomorrow (Monday) before a Lakhimpur Kheri Court to seek his custody. Misra has been accused...

Union Minister of State for Home Ajay Misra 'Teni's son and prime accused in the Lakhimpur Kheri Violence incident, Ashish Misra has been sent to 14-day judicial custody following his arrest by the UP Police yesterday at around 11 PM.

As reported by ANI, Uttar Pradesh would be filing an application tomorrow (Monday) before a Lakhimpur Kheri Court to seek his custody. Misra has been accused of running over his car on protesting farmers and killing 4 of them in Lakhimpur Kheri last Sunday.

Yesterday at 11 AM, he had appeared before the Crime Branch office in Lakhimpur Kheri pursuant to a notice issued to him by the UP Police. Thereafter, he was arrested and sent to the Lakhimpur jail at around 1 am on Sunday after 12 hours of questioning.

As per the media reports, Misra has provided videos and affidavits of 10 persons to claim that at the time of the incident, he was not inside the car which mowed down protesting farmers in Lakhimpur Kheri on October 3.

UP Police SIT, on Thursday, arrested two men in this case, thereafter, the police had pasted a notice outside Ashish Mishra's house asking him to appear before it in connection with the case.

Supreme Court records its dissatisfaction in the case

Importantly, the Supreme Court on Friday recorded its dissatisfaction over the investigation done by the Uttar Pradesh Police in the Lakhimpur Kheri violence, which claimed the lives of 8 people, four of them being farmers protesters who were allegedly mowed down by the vehicles in the convoy of Ashish Mishra, the son of Union Minister and BJP MP Ajay Kumar Mishra.

During the hearing, the bench asked why the accused has not been arrested. When Salve said that the police has served the summons on the main accused Ashish Mishra, the bench asked if that was the norm in all murder cases.

Read court-room exchange here: Lakhimpur Kheri Violence : Supreme Court 'Not Satisfied' With UP Police Probe; Asks 'Is This The Way You Treat Accused In Other Murder Cases?By Sending Summons?'

The PIL in this matter was registered on the basis of a letter sent by two lawyers from Uttar Pradesh seeking a time-bound CBI probe into the recent violent incident of Lakhimpur Kheri.

The FIR registered against him states that the whole incident was "premeditated" and that the entire "conspiracy was hatched by the BJP Minister and his son" who committed the act in a display of hooliganism. The FIR also mentions 15-20 unnamed persons as accused.

The FIR further reads as follows:

"The incident took place at around 3 pm when Mishra, along with 15-20 others, who were armed with weapons, came to the protest site in Banbirpur in 3 speeding four-wheelers. Monu Mishra, who was sitting on the left side of his Mahindra Thar vehicle, opened gunfire, mowed down the crowd and went ahead. the firing led to the death of Farmer Gurvinder Singh, son of Sukhwinder, resident of Matronia in Nanpara."

The FIR also avers that a video was already viral in the social media, wherein BJP Minister has allegedly seen warning protesters who were opposing the centre's three farm laws. In the video, he had asked the protesters to mend their ways, however, despite this, the Central Government didn't act against the BJP Minister.

Allegedly, the SUV was the part of the convoy of Union Minister of State for Home Affairs and BJP MP Ajay Kumar Mishra

Yesterday, the police filed a first information report against Ashish Mishra (son of minister Ajay Kumar Mishra) and several others in connection with the violence under Section 302 IPC.