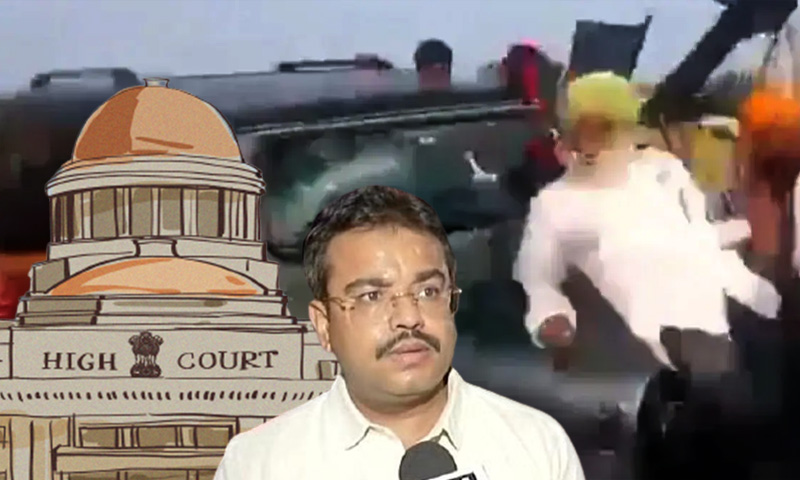 The Allahabad High Court on Monday granted two weeks' time to the informant/complainant in the Lakhimpur Kheri Violence case to file his counter-affidavit in bail plea moved by Prime Accused and Union Ministers's Son, Ashish Mishra/Monu.

Mishra's bail plea was remanded back to the High Court for fresh consideration by the Supreme Court last month while allowing the appeal filed by the victims challenging the bail order of Allahabad High Court.

Essentially, the Allahabad High Court had, on Feb 10, granted bail to Ashish Mishra after noting that there might be a possibility that the driver (of Thar) tried to speed up the vehicle to save himself, on account of which, the incident had taken place.

Thereafter, the Victims moved to the Apex Court to challenge HC's order, however, the State of Uttar Pradesh did not challenge the bail order despite a recommendation to that effect being made by the Judge monitoring the Special Investigation Team.

In the order canceling Ashish Mishra's bail in the Lakhimpur Kheri case, the Supreme Court last month expressed its disappointment at Allahabad High Court for refusing to hear the victims of the case before granting him bail.

The Court also made a critical comment about the "tearing hurry" shown by the High Court in granting bail to Ashish Mishra, the son of Union Minister Ajay Kumar Mishra.

The Top Court noted that the High Court ought to have acknowledged the rights of the victims to participate in the hearings of the bail pleas of the accused. The close relatives of the farmers who got killed in the Lakhimpur Kheri violence had sought to intervene in the bail application filed by Mishra before the High Court. However, their lawyers could not make effective submissions as they got disconnected during the virtual hearing. Though they filed an application for rehearing, the High Court did not consider it.

Now, the matter, after being remanded back to the High Court, is before the Bench of Justice Krishan Pahal who granted two weeks' time to the Victim Jagjeet Singh to file a counter-affidavit. With this, the matter was deferred for further hearing on May 25, 2022.

In related news, denying bail to 4 prime accused in the Lakhimpur Kheri Violence incident, the Allahabad High Court yesterday observed that incident might not have taken place if the Union Minister of State for Home had not made alleged utterances threatening farmers to chase them away from District Kheri.

The Court also found it intriguing as to why the wrestling competition was organized when Section 144 Cr.P.C. was imposed in the area and why did Union Minister of State for Home Ajay Mishra Teni and the Deputy Chief Minister, Keshav Prasad Maurya decided to be present as Chief Guest etc. in the event.

Stressing that the lawmakers cannot be seen to be law violators, the court called it unbelieve that it would not have been within the knowledge of the Deputy Chief Minister of the State that in the area provisions of Section 144 Cr.P.C. were clamped and, any assembly or gathering was prohibited.

Significantly, the Court lauded the efforts of the Special Investigation Team for carrying out a free, fair, impartial and scientific investigation of the offence. With this, the Bench noted that the charge sheet disclosed overwhelming evidence against the accused-applicant and co-accused for the commission of the offence, which has been termed cruel, diabolic, brutal, barbaric, depraved, gruesome, and inhumane.