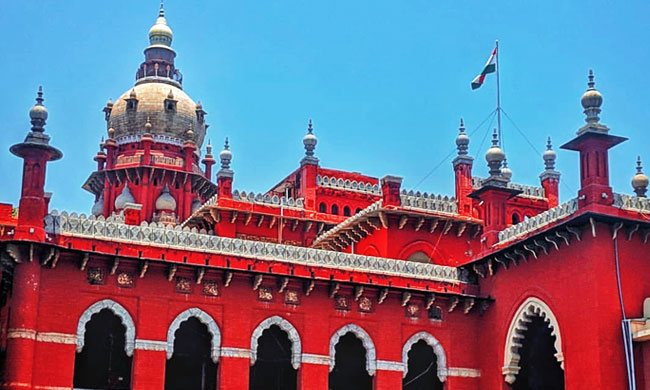 The Madras High Court on Tuesday passed an unprecedented "unusual" order allowing private insurer Cholamandalam MS General Insurance to execute transfer of 23 different Motor Accident Claim petitions pending before various tribunals in the State of Tamil Nadu to the High Court under Section 24 of the Code of Civil Procedure in order to facilitate a compromise arrived at in consultation...

The Madras High Court on Tuesday passed an unprecedented "unusual" order allowing private insurer Cholamandalam MS General Insurance to execute transfer of 23 different Motor Accident Claim petitions pending before various tribunals in the State of Tamil Nadu to the High Court under Section 24 of the Code of Civil Procedure in order to facilitate a compromise arrived at in consultation with accident victims/families.

Justice N Anand Venkatesh noted that the Court was satisfied that the insurer and the respective claimants and their counsel have agreed for the compromise. A total of 23 claim petitions worth in all Rs.51,59,000 will be accorded compromise as a result of the said order.

Referring to the pandemic of Covid-19 at the very outset, Court observed-

"These are unusual times. This is an unusual order. It is sheer force of circumstances, which the entire world is witnessing, not just Chennai or India alone, that has impelled and compelled this court to take note and come to the rescue of the litigants and in particular, the innocent motor accidents victims. The peculiar scenario in which the viral Pandemic has placed us in, has necessitated and warranted the exercise of available jurisdiction of this Court, to aid the cause of justice."

Appearing on behalf of the petitioner, Advocate N Vijayraghavan submitted that instead of waiting for the pandemic to cease, the lockdown to be lifted and normalcy to return, they chose to avail the time to explore the possibility of reaching a compromise, through the services of a panel advocate of theirs. Petitioner's counsel along with officials of the petitioner insurer reached out across Tamil Nadu, to various counsel for claimants, and negotiated compromise in 23 MCOPs.

The said memo contains all necessary details of the claim numbers, the courts before which they were pending, the claim amounts, the identity of the claimants and the amounts reached in compromise, are provided along with the names of the respective counsel for claimants, with their mobile numbers.

The insurer affirmed that the details furnished are true and the respective claimants' counsel have given their digital consent via Whatsapp messages and they have reached out to their clients and taken their consent as well.

"From the above delineation of facts, it is clear and evident that the 23 MCOPs have been negotiated for compromise and the contesting parties are ad idem on it. This Court is satisfied that the insurer has provided satisfactory material to accept that the consent obtained are real and genuine, and the respective claimants and their counsel are agreeable for the amounts reached in compromise and are ready for recording of compromise decree in terms thereof. There is no cause for any doubt in this regard and the manner and procedure adopted by the parties to provide proof of their consent is satisfactory, given the peculiar circumstances of the case."

Addressing the question as to whether a memo can replace the usual format of an affidavit accompanied by a petition and that too a consolidated Memo of this nature for all 23 MCOP, Court said-

"The answer is plain and simple and that is "Procedure is the handmaid of Justice" and it cannot take away the residuary power in judges to act ex debito justitiae, where otherwise it would be wholly inequitable."

Furthermore, after examining Section 24 of CPC, Court observed that the power is not available for exercise only 'upon an application'. It can be exercised, upon the court coming to know of the need for such exercise. Justice Venkatesh noted-

"For invoking the power under Sec. 24, CPC, no notice to the parties would be necessary. This court can, on its own, order such withdrawal or transfer, to meet the ends of justice. There cannot be a fitter case than the present, for invocation of this power. Failure to exercise such power, at this instance, would be a possible abdication of responsiveness. Assumption of jurisdiction is the need of the hour. And this court is unhesitatingly ready and agreeable to do so. There is no prescribed format for the same. There is no bar for the High court to take note, in the given facts and circumstances, the compelling need for the exercise of such power."

"Law is an art and a science. There are legislations of 18th century origin which are still in vogue. Forget not that Epidemic Diseases Act is of 1897 vintage and now amended by April, 2020 Ordinance, to provide for more serious punishments to those who attacked or assaulted health care workers. Law is never static and it keeps evolving and adjusts itself to the advances in technology. We cannot continue to live in the caves. We need to readily embrace technology whose growth has been exponential."

Finally, the bench appreciated the efforts taken by the private insurer -

"I commend the insurer for taking these efforts and all the counsels who have contributed for the positive solution in culmination. Law has never failed to rise up to the situation. It moulds itself. But it requires the stakeholders to play their part too. The court is always willing to listen, adjust and accommodate, for the very purpose of its existence is to serve the Lady of Justice. Blindfolded she may be, but not blind of the eyes of men who look upto her for Justice, not deaf, to the simple words of truth spoken by the men that seek justice and most certainly not dumb, for the very purpose of her existence is to resonate the voice of Justice.

The response from this court cannot lag behind the efforts taken by the insurer, their counsel and the counsel for the claimants in Tamil Nadu, not to forget the victims who have lodged their claims. The victims/claimants also need to be warmly congratulated for their readiness and inclination to interact with their counsel and agree for the compromise of the claims. Give and take is inherent in the cause of justice, as this instance demonstrates to us."

Court directed the private insurer to satisfy all 23 awards as per the terms agreed upon within two weeks.