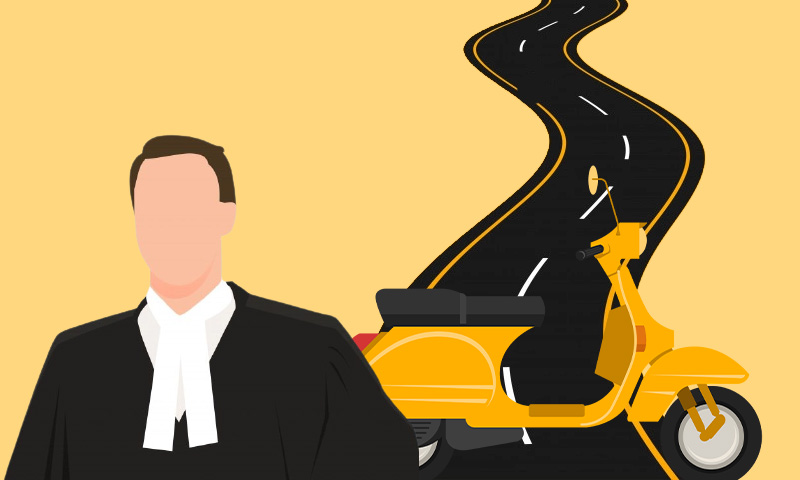 The Allahabad High Court on Friday declined to hear an advocate appearing in a matter as he was riding a scooter while appearing before the Court through Video Conferencing mode.The Bench of Justice Manoj Kumar Gupta and Justice Syed Aftab Husain Rizvi, asked the counsel to be careful in the future and advised him to not repeat the act in future.Lawyer Appears For #VCHearing While...

The Allahabad High Court on Friday declined to hear an advocate appearing in a matter as he was riding a scooter while appearing before the Court through Video Conferencing mode.

The Bench of Justice Manoj Kumar Gupta and Justice Syed Aftab Husain Rizvi, asked the counsel to be careful in the future and advised him to not repeat the act in future.

The order passed by the Court said.

"Counsel for the petitioner tried to address the Court while riding a scooter. The Court, therefore, declines to hear him. He should be careful in future even if the hearing is to take place through video conferencing."

With this, the matter was adjourned for hearing on July 12.

The Orissa High Court in February this year imposed Rs. 500 fine on an advocate who was not wearing a Neck Band while arguing before the Court in virtual mode.

While imposing the penalty, the Bench of Justice S. K. Panigrahi observed,

"The profession is solemn in nature and its profundity is complemented by its attire. Being an Advocate, he is expected to appear before the Court in a dignified manner with proper dress, even if it is a virtual mode."

It may be noted that there have been incidents where Advocates appear for a virtual court in inappropriate dresses.

The Gujarat High Court, last year, while taking up a Criminal Misc. Application noticed that applicant-accused No. 1, Ajit Kubhabhai Gohil, who was present before the Court through video conferencing, was spitting openly.

Deprecating such conduct of the accused, the Bench of Justice A. S. Supehia had said,

"This Court is not inclined to take up the matter today looking to the conduct of the applicant-accused No. 1."

Further, the Court directed the applicant-accused No. 1 to deposit a cost of Rs. 500/- before the Registry of this High Court on or before the next date of hearing, failing which the matter shall not be taken up for hearing.

The Karnataka High Court once slammed an advocate who was participating in the video conference proceedings while sitting inside a car.

"Though due to extraordinary reasons, we are forced to hear matters through video conferencing hearing. We hope and trust members of the bar will follow the minimum decorum.", a division bench of Chief Justice Abhay Oka and Justice Ashok S Kinagi said

Last year, the Supreme Court had accepted the apology of an advocate who had made an appearance before the Court, whilst lying on the bed dressed in a T-shirt, and emphasized on the need to maintain minimum court etiquette during court video hearings.

Rajasthan High Court once adjourned a Bail plea on account of inappropriately dressed counsel in a "baniyan" (undervest) during the Video conference hearing.

Also, the Orissa High Court condemned the practice of lawyers arguing cases through VC from inside vehicles, gardens & while eating etc.

Furthermore, Calcutta High Court had initiated suo motu contempt action against an advocate-on-record for posting on 'LinkedIn' a screenshot of the virtual court hearing of the day when a favorable interim order was passed by the Single Judge while calling for affidavits.