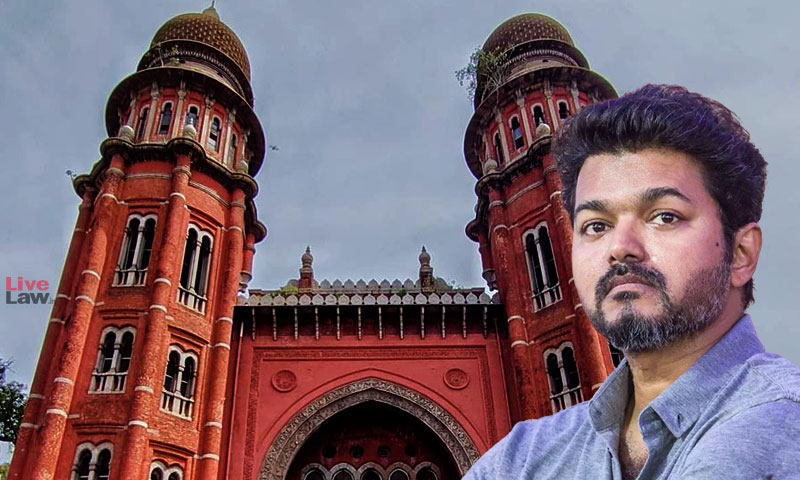 The Madras High Court has dismissed a petition filed by Tamil Actor Vijay in 2012, seeking forbearance against the Tamil Nadu Government from demanding entry tax on his imported Rolls Royce Ghost Motor car. Justice SM Subramaniam also imposed costs of Rs. 1,00,000 on the actor, saying that filing a writ petition for avoiding tax can never be appreciated."The common man are motivated...

The Madras High Court has dismissed a petition filed by Tamil Actor Vijay in 2012, seeking forbearance against the Tamil Nadu Government from demanding entry tax on his imported Rolls Royce Ghost Motor car. Justice SM Subramaniam also imposed costs of Rs. 1,00,000 on the actor, saying that filing a writ petition for avoiding tax can never be appreciated.

"The common man are motivated and encouraged to behave as a lawful citizen and pay tax and to thrive hard to achieve social justice in the society. If the rich, affluent and reputed persons fails to pay the tax as applicable, then this Court with pain, records that it would be a long way to achieve the constitutional goals," the Court observed.

The petitioner, represented by Advocate S. Kmnaresan, stated that he imported Rolls Royce Ghost Car from England. He paid the import duty to the Customs Department as levied under the Customs Act. After that, he approached the Regional Transport Officer for assigning a new Registration mark for his vehicle. However, he was directed to approach the Assistant Commissioner (CT) to pay Entry Tax.

The petitioner thus approached the High Court under Article 226 of the Constitution of India to argue that an extraordinary Entry tax is being imposed on his imported vehicles.

At the outset, the Court expressed surprise that the petitioner did not even bother to reveal his occupation in the affidavit. It further noted that the petitioner, being a reputed Cine Actor, is expected to pay the Tax promptly and punctually.

It observed that the system of taxation is the backbone of our Nation's Economy and is a mandatory contribution. It is not a voluntary payment or donation, which one decides on one's own.

"The Tax collected from the Government is to carry out the functions such as social welfare projects like Schools, Hospitals, Housing Projects for the Poor etc., and infrastructure such as Road Projects, Flyovers, Railways, Ports, etc. Security infrastructure of our great Nation, Enforcement of Law and Order, Pensions tor elders, Benefit scheme to the unemployed and the citizen living below poverty lines."

The Court further held that the actor-petitioner has a large fan base who look at him as a 'real hero'. It observed that in the State of Tamil Nadu, Cine Heroes rose as rulers of the State; therefore, the people are under the impression that they are the real heroes.

Given his reputation and fan base, the Court held that the actor is not expected to behave like a "reel hero".

"Tax evasion is to be construed as anti-national habit, attitude and mindset and unconstitutional. These Actors are portraying themselves as champions to bring social justice in the society. Their pictures are against corrupt activities in society. But, they are evading Tax and acting in a manner, which is not in consonance with the provisions of the Statutes", the Court noted.

The Court criticized an attempt to evade tax payment and observed in the backdrop,

"The noble perspective of the Constitution under the Directive principles can be achieved only if the people of such stature, rich, unhesitatingly pays the Tax to the Government and comply with the Laws of the Land. Filing a writ petition, avoiding payment of Entry tax and keeping the writ petition pending for about nine years can never be appreciated, and it is not made clear even now whether the Entry tax as applicable has been paid by the petitioner or not".

The Court reminded that if the constitutional goals are not met, then accumulating wealth or possessing the world's prestigious Car, Rolls Royce, would not be of any assistance for a better life, as our country is enriched with culture and social values.

It concluded with the hope that the actor-petitioner and other similarly placed citizens pay their taxes, making the nation proud and leading it towards social justice, eliminating inequalities, economic status, etc.

"The non-payment of Entry tax by the petitioner can never be appreciated, and the petitioner has not respected nor responded to the lakhs and lakhs of his fans, who bas paid by viewing his movies and from and out of such money, the petitioner / Actor purchased the world's prestigious car for his personal usage. The reputed persons of this great nation should realize that the money reaches to them is from the poor man's blood and from their hard-earned money and not from the sky."

The Court held that it is a settled position of law as laid by the apex court in the case of State of Kerala and others vs Fr. William Fernandez (2018), ruling that the respondents are competent to collect Entry Tax and therefore, the petitioner herein is also liable to pay the Entry Tax as per the claim made.

The Court directed the petitioner to pay the Entry tax within two weeks from the date of receipt of a copy of the order, by adjusting 20% of Entry tax as ordered by the Court in the interim order 17.07.2012, if already paid. If the actor-petitioner fails to pay the entry tax, the Court directed the respondents to initiate further actions under the Statutes for recovery of the Entry tax and the consequential liability, if any, as per the provisions of the Act and the Rules.

It also imposed Rs. 1 lakh cost which has to be paid towards Tamil Nadu Chief Minister's Covid-19 Public Relief Fund.