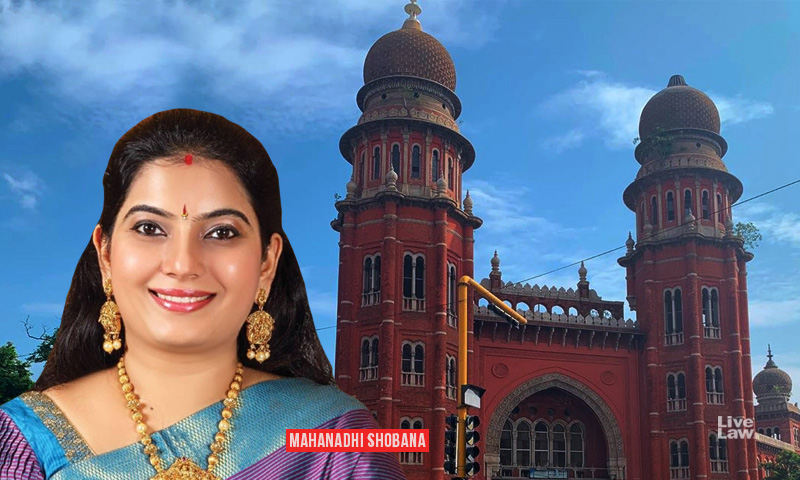 Justice M S Ramesh noted in the interim order that the assignment agreements based on which Symphony was claiming rights were executed when Shobana was a minor, and were hence unenforceable.

Even otherwise, the assignment rights cannot be exercised beyond the period of five years as per Section 19(5) of the Copyright Act 1957, and hence the rights under the agreements stated to have been executed in 1996 came to an end in 2001, the Court added.

Shobana earned the name 'Mahanadhi' Shobana following her role as 'Kaveri' in the Kamal Haasan starrer Tamil film 'Mahanadhi' as a child artist. In her suit, she stated that, as a teenager, she had sang many devotional songs and nursery rhymes for the defendant, which became hugely popular.  In 1996, while she was aged 15 years, the company had prevailed upon her to sign two agreements, assigning her rights in respect of 5 devotional songs and 37 nursery rhymes to it.

In 2016, it came to her notice that the defendant had uploaded her songs in its YouTube channel, along with her pictures taken without authorization from her personal Facebook page. It was mentioned in the plaint that the songs have crossed more than 47 million views till October 2019, and made huge profits illegally.

Though a 'cease and desist' notice was served, the company did not heed.

"I requested the respondent to cease and desist from using my photographs and musical works both personally and through legal notice dated 31st August 2019. But the respondent has refused to do so and continued to exploit my rights until now without any justifiable reasons. I state that the act of the respondent would amount to infringement of my copyrights governed under the Copyright Act. Also, the respondent has published various video embedded with my personal picture in their You Tube channel against my will", she stated in the application seeking interim relief.

Finding that a prima facie case was made out, the Court ordered as follows :

"When the defendant themselves claim their rights through these two documents, which are prima facie illegal, any further act of the defendant in distributing, manufacturing or selling the songs rendered by the plaintiff, would be impermissible. Since the plaintiff has made out a prima facie case, there shall be an order of interim injunction, pending disposal of the suit"