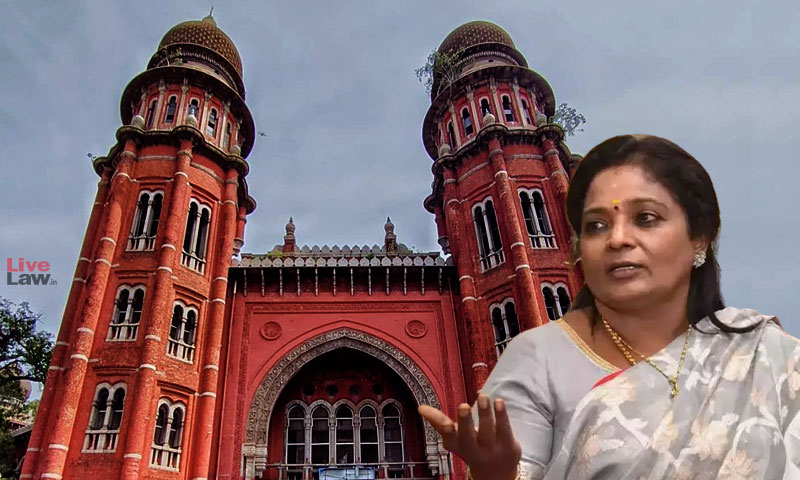 The Madras High Court on Tuesday quashed a criminal defamation case against Tamilisai Soundararajan, now Governor of Telangana holding additional charge as Lieutenant Governor of Puducherry pending before a Judicial Magistrate court in Kancheepuram.The defamation case had been filed against Soundararajan for comments allegedly made by her when she was the President of the Bharatiya Janata...

The defamation case had been filed against Soundararajan for comments allegedly made by her when she was the President of the Bharatiya Janata Party (BJP) in Tamil Nadu. During an interview, she had allegedly stated that the Viduthalai Chiruthaigal Katchi (VCK) party and its head, Thirumavalavan conducted "kangaroo courts" and seized lands from the public.

Justice M. Dhandapani quashed the case on merits though there was no representation either on behalf of Ms. Soundararajan or the complainant Dhadi K. Karthikeyan of VCK despite adjourning the hearing on multiple occasions.

"Inspite of repeated adjournments, this Court has not seen the light at the end of the tunnel by way of the respective learned counsel appearing for the parties. In the aftermath of the long pending nature of the case and further the facts of the case and the documents, which stares on the face of the record, warrants disposal of this case on appreciating the merits and documents available in the typed set, this Court proceeds to dispose of the case without further delaying the disposal of the matter for the presence of the learned counsel for the parties", the order read.

The Court noted that no material whatsoever had been placed on record by the complainant and accordingly quashed the defamation case by observing,

"The complaint is a mere collection acts of the said to have been done by the political party and its President, but for the few lines of innuendos against the petitioner. The complaint is nothing but an attempt on the part of the respondent to gain political publicity at the cost of judicial time."

It was further observed that since no comment had been made against the complainant himself, essentials required for filing a criminal defamation case under Section 499 IPC were not fulfilled. Thus, the Court held that the 'whole complaint falls like a pack of cards'.

Justice Dhandapani further pointed out that the complainant had not submitted any document before the Magistrate to prove that he had been authorized either by VCK or Mr. Thirumavalavan to file the instant complaint.

"The respondent (Mr. Karthikeyan), on his own accord and for reasons best known to him, has thought it fit to file the private complaint. The respondent not being the person affected, the invocation of Section 500 (criminal defamation) of Indian Penal Code does not merit acceptance," the Court remarked.

Additionally, it was also noted that the trial court had not applied its mind while issuing summons to Soundararajan in the matter. While the complaint had referred to the provision of Section 500 of the IPC (punishment for defamation), the trial court had issued notice under Section 138 of the Negotiable Instruments Act.

The Court remarked that mentioning wrong provisions of law was "not only ridiculuous, but clearly shows the non-application of mind on the part of the court below in taking cognizance of the issue by issuing summon".