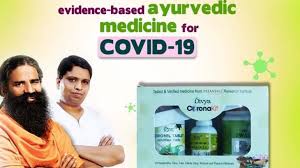 The Madras High Court recently restrained Patanjali Ayurveda from using the trademark 'Coronil'- the controversial drug that the company initially claimed to be a cure for the deadly Corona virus. The injunction order was passed by a single-Judge bench of Justice CV Karthikeyan, in a plea moved by a Chennai based private company Arudra Engineering, claiming rights over...

The Madras High Court recently restrained Patanjali Ayurveda from using the trademark 'Coronil'- the controversial drug that the company initially claimed to be a cure for the deadly Corona virus.

The injunction order was passed by a single-Judge bench of Justice CV Karthikeyan, in a plea moved by a Chennai based private company Arudra Engineering, claiming rights over the mark.

The plaintiff-company had approached the High Court contending that 'CORONIL-92 B' was its registered trademark since 1993 for "Acid inhibitor for industrial cleaning" used as chemical preparations in industries.

At the outset, the court noted that the similarity in the name is "obvious". "The name used by the defendant is the same. The spelling is same," it remarked.

Senior Advocate PR Rama appearing for the Company submitted that protection has to be granted whenever a registered trademark is infringed by a person who is not a registered proprietor and uses in the course of his trade a mark identical to the trade mark already registered, irrespective of the fact, whether the business is similar or not, under Section 29(4)(b) of the Trademarks Act, 1999.

"The plaintiff had registered the trade mark owing to the fact that their products which is in liquid form is used by heavy industrial machinery industries to prevent corrosion and to reduce the depreciation in the value of the units during the cleaning process. The list of customer companies shows that huge industrial units like BHEL, NTPC Limited, Reliance industrial Ltd., Indian Oil Corporation and other such companies are the clients of the plaintiff," the court noted (the extensive clientele of the company).

The Plaintiff-company further contended that it had established substantial reputation in marketing their product 'Coronil' and had effected substantial sales under the mark.

In view of these submissions, the High Court has granted temporary injunction in favour of the Plaintiff-company till July 30, 2020.

"It is seen that the plaintiff has a registered trademark Coronil and the registration is still subsists. Once the plaintiff has a registered trademark, protection has to be given from infringement. The law is clear on that aspect. The defendant has also claimed that he is going to market his product in the same name 'Coronil'. The defendant can also market their product, but they have to use a different name. They cannot infringe upon the right accrued to the plaintiff owing to the registration of the trademark Coronil as early as 1993, which registration still subsists," the court observed.

"Interim injunction is granted restraining the defendant… from infringing the applicant's registered trademarks bearing the name "Coronil" and from using the objectionable trademarks and/or deceptive variation of the applicant's aforementioned trademarks singularly or in conjunction with any word/s or monogram/s/logo/s upon and in relation to their products/business in any manner whatsoever till 30.07.2020. The plaintiff is to strictly comply with the stipulations under Order XXXIX Rule 3(a) of C.P.C."

Patanjali's alleged Covid-cure has drawn substantial flak from all quarters. On June 23, when the medicine was launched, the Ministry of AYUSH asked the Company to stop making any claims related to Corona treatment, as they had not been verified by the government.

Later, a complaint against the company owners, Yoga Guru Baba Ramdev (Founder) and Acharya Balkrishna (MD, CEO), was filed before a court in Muzaffarpur, Bihar.

Legal proceedings against the company are also pending before the High Courts of Uttarakhand and Delhi, allegedly for making false claims about the medicine and deceiving the country.

Highlighting these circumstances, the Plaintiff-Company had also submitted that details of clinical trials for treating Corona virus were are not available with the Company. Further, the medicine had already been banned in the State of Maharastra and even in Uttrakand, the State Government had sought details about the effectiveness of the medicine.