'Not Good For States To Rival Each Other In Race For Vaccines' : Madras HC Suggests Vaccine Allocation By Centre 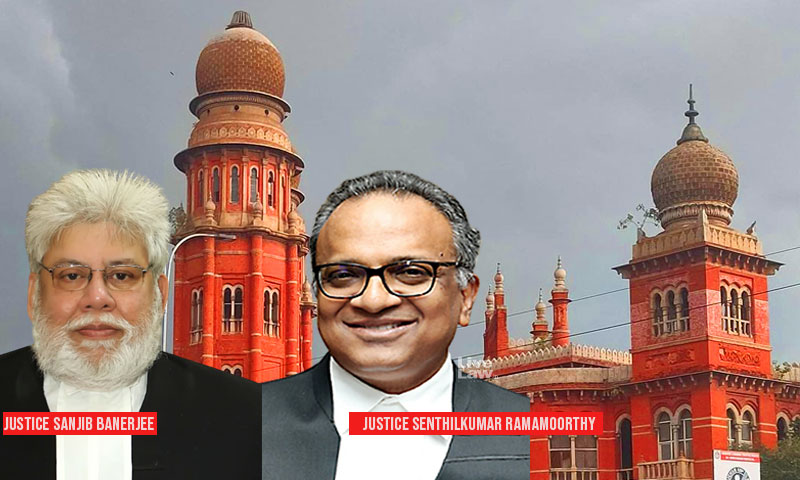 Expressing concerns about the tendency of states to be rivals against each other in the "race to obtain vaccines", the Madras High Court on Monday suggested that the Centre should allocate the vaccines.Chief Justice Sanjib Banerjee, speaking on behalf of a Bench comprising himself and Justice Senthilkumar Ramamoorthy orally expressed the view that various states were facing problems...

Expressing concerns about the tendency of states to be rivals against each other in the "race to obtain vaccines", the Madras High Court on Monday suggested that the Centre should allocate the vaccines.

Chief Justice Sanjib Banerjee, speaking on behalf of a Bench comprising himself and Justice Senthilkumar Ramamoorthy orally expressed the view that various states were facing problems in individually procuring the vaccine from manufacturers.

Stating that "it was not good for States to rival each other... in the race to obtain vaccines", the Chief Justice suggested that the vaccine allocation would have to be done by the Centre.

The Court noted that the State of Tamil Nadu and Union Territory had managed to control the Covid-19 surge, but voiced a view that the allocation of vaccines seemed skewed.

Additional Solicitor General R Sankaranarayanan informed told the Madras High Court that as per the Centre's latest plan, 216 crore doses of COVID-19 vaccines would be made available by the end of December 2021, allowing every person in the country to be vaccinated.

During the hearing today, the Chief Justice referred the Centre's affidavit and expressed that the future allocation of vaccines, appeared to be skewed, considering the number of COVID-19 cases in the State.

The ASG averred that the allocation factored in a state's population, the positivity rate in such State and other relevant details.

Against this submission, the Court said, "Though the Centre maintains that the allocation is based on the population of a State, the positivity rate prevailing in such State and like objective factors, the allocation to Tamil Nadu, as indicated in the Centre's affidavit, may require to be revisited. However, there is hope that vaccines would be available in greater numbers upon the various manufacturing units augmenting their production facilities."

On the aspect of augmenting vaccine production, the Additional Solicitor General submitted that vaccine production was being done by manufacturers such as Serum Institute and Bharat Biotech as well as Cadila vaccines.

The Chief Justice's order for the day exhorts the Centre and the State Government to allay misgivings people might have about getting vaccinated/ superstition and organise awareness campaigns to dispel wrongful notions about vaccines.

"Awareness campaigns and like measures need to be undertaken to educate the citizens, particularly in the rural areas, to step forward and take the vaccine. Superstitions and archaic beliefs practiced in some communities stand in the way of scientific measures being implemented and there continues to be a resistance to accepting vaccination in certain sections of the society. Both the Centre and the State should take appropriate measures to allay the misgivings that may be harboured in such regard," the Bench states in its Order.

The Centre also responded to the Court's question on mucormycosis (black fungus) cases in the State, indicating that measures to manufacture drugs in bulk were already in place, by reducing the quantum of production of other medicines for the moment. This submission was recorded, along with the fact that the required drugs are in short supply.

The ASG apprised the Court that the Prime Minister already met with the empowered committee and other officials and there were plans in place to face the onslaught of the cyclone. He sought permission to bring the measures taken on record later, which was accepted by the Court.

Apart from this, the Court noted that the supply of oxygen to Tamil Nadu through the Eastern corridor (146 MT allocated) was not regular.

By and large, the Court recorded that there was no clamouring for oxygen in either the State or the Union Territory.

Territory appear to be adequate, the Court however, pointed out that certain intervenors had alleged that, the rich and the influential were able to book a bed or an oxygenated bed, particularly in private hospitals, without there being a need for the same.

"As a result, it is submitted that the less fortunate are being denied beds, as beds in government hospitals appear to be all filled up", the Court noted in its order.

On release of vulnerable inmate populations including women with children

At the hearing today, Senior Advocate R Vaigai who served as an amicus in one of the cases the highlighted that there were several woman prisoners with children aged less than 6 years old whose interim release on bail and parole ought to be considered.

In its order, the Court suggested that"...such categories of inmates at correctional homes be also picked out for special treatment and allowed to return home or be granted parole or interim bail or the like to ensure that both the mother and the child remain protected. The other categories of persons who had been required to be considered to be released temporarily last year should also be considered by the relevant High Powered Committee under the aegis of the Legal Services Authority", the Court ordered.

The Court took the view that prisoners so released were to remain free at least till July 15 and directed the AG to immediately confer with the Director General of Police and the Secretaries of the concerned State departments on the matter of releasing inmates.

On vaccinations for persons with disabilities

The Court has asked the State for a plan of action on how those with severe disabilities or those who cannot leave home can be vaccinated. The case will be taken up in two weeks' time.

On the need for state supervision on factories exempted from lockdown

One of the intervenors today sought a declaration that persons delivering food, lawyers, judges, healthcare providers be included in the vaccine priority category.

On this count, the Court said that the State could take a considered decision on whether these groups were to be vaccinated on priority.

The Court is expected to take up its suo motu case monitoring Covid management and other Covid-related cases on Thursday.

Vaccination for Persons with Disabilities