'Right To Relax Can't Be Curbed Fearing Breach Of Morality': Madras HC Disagrees With Another Bench's Direction To Install CCTVs In Spas 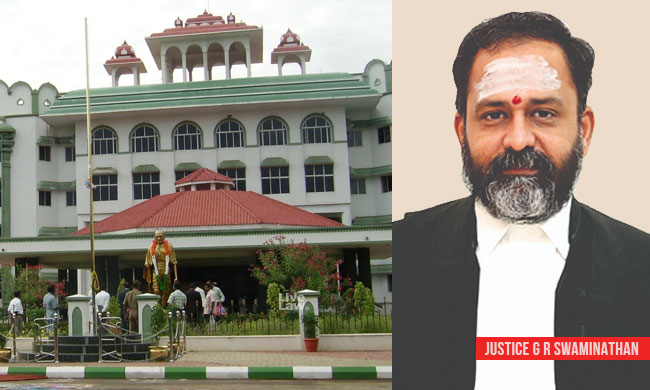 x
"There are inviolable spaces where the prying eye of the state simply cannot be allowed to enter", Justice G.R. Swaminathan observed.

"In State of Madras v. V.G.Row (AIR 1952 SC 196), Justice M.Patanjali Sastri, C.J. remarked that the Supreme Court had been assigned the role of a sentinel on the qui vive as regards the fundamental rights. I venture to think that this applies with equal force to every court and not just the constitutional courts." While considering a writ petition filed for obtaining a 'No...

"In State of Madras v. V.G.Row (AIR 1952 SC 196), Justice M.Patanjali Sastri, C.J. remarked that the Supreme Court had been assigned the role of a sentinel on the qui vive as regards the fundamental rights. I venture to think that this applies with equal force to every court and not just the constitutional courts."

While considering a writ petition filed for obtaining a 'No Objection Certificate' from the Police for running a cross-massage centre, the Madras High Cour has also analysed a recent single judge bench order for the installation of CCTV cameras inside Spa and Massage Centres.

The court observed in clear terms that mere apprehension about a breach of morality cannot be a valid ground to curb the right to relax, which is a part and parcel of the right to privacy. Referring to the landmark decision in Navtej Singh Johar & Ors. vs. Union of India & Ors, (2018) 10 SCC 1, the single judge bench pointed out that 'constitutional morality shall trump public morality'.

"The installation of CCTV equipment inside premises such as a spa would unquestionably infract upon a person's bodily autonomy, These are inviolable spaces where the prying eye of the state simply cannot be allowed to enter" the court held.

The court was referring to the order passed by Justice S.M Subramaniam in C P Girija v. Superintendent of Police & Ors. dated 20th December, 2021. In the said order, the bench directed the installation of functional CCTV cameras in all spas, massage centres, therapy centres etc. in the State of Tamil Nadu. It was also directed by the court that secluded or closed rooms for conducting business activities must be avoided in spas and massage centers.

According to the Madurai bench, the judgment in C.P.Girija clearly violated the principles laid down in the Puttaswamy judgment given by a 9 judge bench of the Supreme Court.

A day after Justice S.M Subramaniam passed the order, Justice G.R Swaminathan of the Madurai Bench disposed of a writ petition asking the respondent police to consider the application for the issuance of 'No Objection Certificate' to a Spa located in Trichy. It was also clarified that the Police will have no authority to unnecessarily interfere in the functioning of the cross-massage centre as long as it is run in accordance with law.

However, the Government Advocate informed the judge about the order pronounced by Justice S.M Subramaniam about the direction for CCTV surveillance and law enforcement agencies frequenting such business premises.

About recalling the order pronounced by Madurai Bench, Justice G.R Swaminathan observed that it is true that a coordinate bench cannot take a contrary view according to the dictum in S.Kasi v. State (AIR 2020 SC 2921). However, the single judge bench pointed out that when the law has already been laid down by the Supreme Court, reliance can be placed on Article 141 of the Constitution.

The court noted that the judgment in C.P Girija mandates CCTV Surveillance not in a public place but in private, intimate spaces. Once again referring to the Puttaswamy judgment, the court noted as below:

"…any invasion of life or personal liberty must meet the three-fold requirement of (i) legality, which postulates the existence of law; (ii) need, defined in terms of a legitimate state aim; and (iii) proportionality which ensures a rational nexus between the objects and the means adopted to achieve them. In the first place, unless a legislature mandates by law that CCTV cameras ought to be installed in a certain space, to do so would violate Article 21."

Applying the above principle to facts surrounding the issue at hand, the court opined that the Notification under Section 373 of the Chennai City Municipal Corporation Act, 1919 only mandates CCTV Surveillance at the entry and exit points of premises. The notification by Greater Chennai Corporation also stresses safeguarding individuals' privacy when the law enforcement authorities avail the benefit of CCTV surveillance. The notification was issued after the court's directions in Masti Health and Beauty Private Limited vs. The Commissioner of Police Chennai City (2014)

Furthermore, the court equated the right to relax and the essential features of privacy propounded in Puttaswamy judgment, i.e., repose, sanctuary and intimate decisions.

" "Repose" refers to freedom from unwarranted attention, "sanctuary" refers to the freedom of keeping things to oneself and "intimate decisions" refers to the freedom of autonomy to make personal life choices. The right of an individual to avail means of relaxation (in this case, via spa) falls within the ambit of the right of repose and sanctuary. Therefore, any intrusion into the right to relax shall necessarily have to satisfy the test of legality, legitimate aim and proportionality.

The court also underscored that the ambit of fundamental rights cannot be curtailed by a judicial measure when the legislative and executive has already put regulations in place.

"The Hon'ble Supreme Court alone can do so in exercise of its power under Article 142 of the Constitution", the court clarified.

About the direction given in C.P. Girija to avoid partitions/ closed off rooms, Justice G.R. Swaminathan opined that it was not practical. A spa/ massage parlour with partition/room/Sauna/bathing facilities must be accounted for when the Greater Chennai Corporation Notification itself recognises the peculiarity of such business premises.

"One can take judicial notice of the fact that after a massage session, the customer might prefer to take a soothing hot water bath. That is why, the aforesaid notification refers to Sauna/bathing facilities. They have to be necessarily in closed rooms. There cannot be transparency in such matters", the court added.

The writ petition was accordingly disposed of while granting the respondent authorities 4 weeks' time to decide on the petitioner's application for 'No Objection Certificate'. It was also directed that the law enforcement authorities must avoid unnecessary interference with the business if the no-objection certificate is issued and the license is granted to the Cross Massage Parlour.

Cross-Gender Massage Does Not Amount To 'Sexual Activity': High Court To Delhi Government