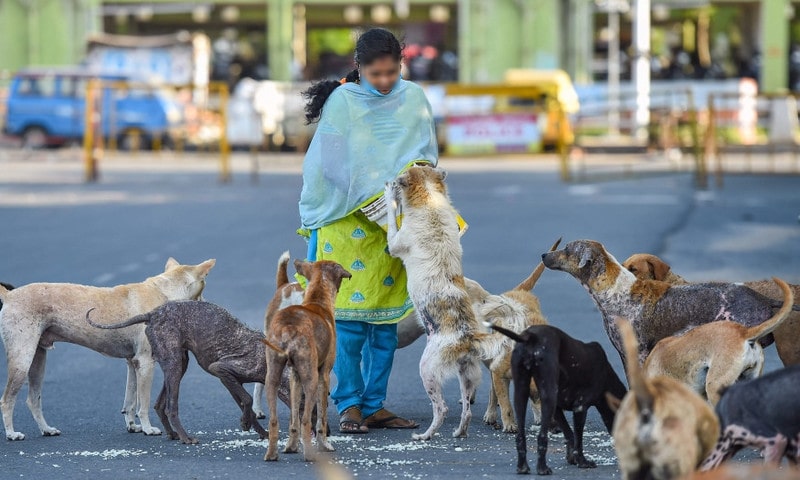 A woman feeds stray dogs during the nationwide lockdown, imposed in wake of the coronavirus pandemic, in Chennai. (Image: PTI)

Dealing with a plea seeking necessary steps to ensure that the stray Animals are provided with food and water in this COVID -19 Pandemic, the Madras High Court on Wednesday directed the Husbandry Department to chalk out a holistic plan for the general treatment of stray animals in the State providing for a scientific and humane approach even during normal times.

The Bench of Chief Justice Sanjib Banerjee and Justice Senthilkumar Ramamoorthy also directed that a comprehensive plan dealing with vaccinating stray dogs and cats, if necessary, or collaring them or the like should also be thought of.

The petition related to stray animals who find it difficult to forage for food with the lockdown in place. In particular, several horses have been left to fed for themselves by the owners who otherwise exploit them to earn a living

Perusing a letter sent by the Director of Animal Husbandry and Veterinary Services to the Registry of the Court, the Court noted that 2500 kg of dog feed and 200 kg of cat feed had been procured and a total of 500 feeders had been provided with such material to ensure the feeding of stray and abandoned animals.

The letter also informed the Court that the second tranche of procurement is proposed to be made immediately and distributed once the earlier material has exhausted. The report spoke of 3,536 kg of wheat bran being distributed to feed 104 horses.

Earlier, the Court had appreciated the fact that both the Governor and the State have released funds for a noble cause as promptly as they have.

further, hoping that private parties, including some prominent corporate houses, would chip in with money or material to ensure that the voiceless do not suffer during the lockdown, the Court had remarked:

"Indeed, the Hon'ble Governor released funds without there being a request from the Court and before the State released funds. The funds released by the Governor helped in the initial feeding, particularly of stray dogs and cats in and around this metropolis."