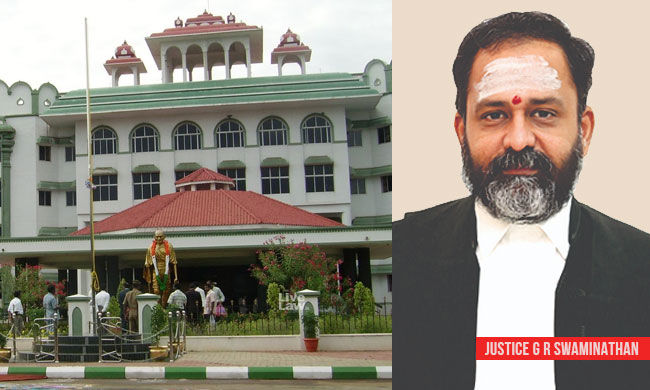 Justice GR Swaminathan of the Madras High Court has directed the Madurai bench registry to register a suo motu case of criminal contempt against Youtuber/Commentator Savukku Shankar for his tweets against the judge. The court also directed the registry to implead social media intermediaries like Facebook, Twitter and Youtube and send notices to their compliance officers. The court also impleaded the Secretary to Government, Ministry of Electronics and Information Technology (MeitY).

Savukku Shankar had through his tweets alleged that the Judge had "met someone" in connection to the proceedings against another Youtuber Maridhas thus raising questions on the order passed by the judge which was in favor of Maridhas. Through his tweets, Mr. Shankar suggested that the Judge was influenced by the person whom he met when he quashed the criminal prosecution against Maridhas who was charged for tweeting against the DMK government in Tamil Nadu.

Justice Swaminathan observed that even on previous occasions, Mr. Shankar had personally attacked the judge by making comments against his judgments in the most "uncharitable language". However, since he was a strong believer in upholding freedom of speech and expression, he did not pay heed to these remarks. In the present instance, however, Mr. Shankar had crossed the "lakshman rekha".

"Thiru.Savukku Shankar had condemned the said decisions in the most vituperative words. I genuinely felt that Thiru.Shankar was entitled to pass comments on my judgments. But through the offending tweet, Thiru.Shankar has questioned my integrity. He asks me "who I met at 06.00 A.M at Azhagar Koil when I was hearing the case pertaining to Thiru.Maridhas?" By this innuendo, Thiru.Shankar is suggesting that the outcome of the Maridhas case was influenced by the person I am alleged to have met. This is clearly scandalizing the judiciary. Prima facie Thiru.Shankar had committed criminal contempt", the order stated.

Justice Swaminathan noted that before signing the order, Savukku Shankar came out with another tweet with allegations against the judge.

In the order, Justice Swaminathan extracted the statistics relating to his case disposals during his 5 year term as judge so far.

"For the salary drawn by me and the perquisites enjoyed , I believe I have worked to the fullest. I have been able to achieve this result by sitting from 09.30 A.M onwards and beyond the court hours. Thiru.Shankar had been poking fun at my sitting hours. I felt vindicated when His Lordship The Hon'ble Mr.Justice U.U.Lalit spoke in support of early sitting. It is ironical that Thiru.Shankar who was employed in the Directorate of Vigilance and Anti Corruption as a ministerial staff is said to be getting Subsistence Allowance for several years. A person who is getting paid by the State without doing any work has the audacity to mock at a Judge who feels he must justify every paise that he gets from the exchequer", the order stated.

Justice Swaminathan noted that a sexual harassment case was pending against Mr. Shankar and even though directions were issued by the Madras High Court to conclude the investigation by CBI, nothing had transpired so far. He also took note of the fact that Mr. Shankar was employed in the Directorate of Vigilance and Anti Corruption as a ministerial staff and had been receiving a subsistence allowance.

A person who is getting paid by the State without doing any work has the audacity to mock at a Judge who feels he must justify every paise that he gets from the exchequer. The State government is obliged to make a statement regarding the status of the disciplinary action initiated against Thiru.Savukku Shankar.

Justice Swaminathan also noted that the Twitter account of Mr. Shankar was suspended but he managed to create another account and has continued to raise baseless allegations against the Judge.

I take judicial notice of the fact that the Twitter account of Thiru.Savukku Shankar was recently suspended. But he has managed to create an alternative account. In mythology, whenever the head of an asura is slayed, another one will pop up. Thiru.Savukku Shankar appears to have taken inspiration from such mythological characters.

He also relied on the decision in Prashant Bhushan's contempt matter (2021) 1 SCC 745 wherein the Supreme Court had observed that contempt jurisdiction can be exercised when a statement tends to undermine the dignity and authority of the court or when a statement is calculated in order to malign the image of judiciary or when the authority of the court itself is under attack. It was also held that a publication that attacks individual Judges or the court as a whole with or without reference to a particular case, casting unwarranted and defamatory aspersions upon the character or ability of the judges would come within the term of scandalizing the court. Imputing partiality, bias, or improper motives to a judge is a scandalization of the court and would be criminal contempt.

Thus, using the power under Article 215 of the constitution, the court, being satisfied that Mr. Shankar had exceeded his limits, directed the registry to issue Statutory notice to Mr. Shankar and show cause as to why action should not be taken against him.

Shankar has been directed to personally appear before the judge on the next hearing date.