While quashing a criminal defamation case filed against a person who had published an alleged humiliating and defamatory cartoon on his Facebook page, the Madras High Court recently ruled that the Court cannot teach ethics to the people and it is for the Society to evolve and follow the ethical standards. Elaborating on the Toon Controversy, the Bench of Justice G. Ilangovan said:"In...

While quashing a criminal defamation case filed against a person who had published an alleged humiliating and defamatory cartoon on his Facebook page, the Madras High Court recently ruled that the Court cannot teach ethics to the people and it is for the Society to evolve and follow the ethical standards.

Elaborating on the Toon Controversy, the Bench of Justice G. Ilangovan said:

"In the recent times another problem, which was created by a cartoonist throughout the world is the "Toon Controversy". That cartoon was about the Prophet Mohammed, which created controversy throughout the World. The discussion emanated from this episode is as to the limitations of freedom of speech and expression and as well as the principles of hate speech and expression."

The accused/petitioner had published a cartoon on his personal Facebook page regarding the self-immolation incident that took place on October 23, 2017, and in the cartoon, he portrayed the burning body of the baby, which was watched by three persons, without clothes and carrying currency notes to cover their private parts.

The said three are named as the District Collector, the Superintendent of police, and the Hon'ble Chief Minister of Tamil Nadu. 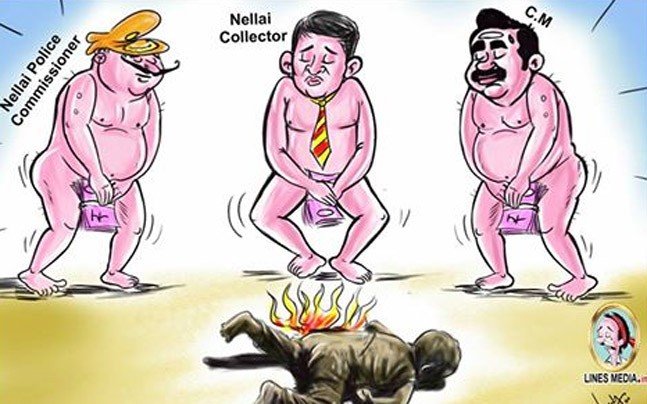 The Accused/Petitioner was booked alleging that the cartoon was highly humiliating and defamatory and it was published without proper verification of the facts and also prevented the Government Officers from discharging their duties, because of the false accusation.

On the basis of the complaint given by the District Collector, a case was registered for the offences punishable under Section 501 of IPC and Section 67 of the Information Technology Act, 2000.

At the outset, the Court observed that the question, which arises for consideration is that where the fundamental rights of freedom of thought and expression must begin and where it must end.

"Freedom of thought and expression is subject to the limitations that have been set out in Article 19(2) of Constitution of India. Just like, any other citizen, a cartoonist is also bound by the law and in the form of a cartoon, he cannot defame any one, this is the settled position of law," noted the Court

Further, noting the facts of the case,

"In a democratic country, freedom of thought, expression and speech are the foundations upon which democracy survives, without which there can be no democracy and therefore, no evolution of the Human Society."

Further, the Court also noted that the petitioner wanted to express his anger, grief, and criticism regarding the inability of the administration, both Executive and Police, in containing the collection of exorbitant interest by the money lenders.

"Three lives were lost in the premises of the Collectorate over the demand of exorbitant interest by a money lender. The problem pertains not with reference to the grief, criticism or the social interest which the petitioner wanted to explain and create an awareness in the mind of the people, but the manner in which it was expressed becomes controversial. Depicting the officials right from the Head of the Executive down to the District Police in that form created the controversy"

The Court also said that if people encounter the cartoon, some may feel that it is an over-exaggeration of the event, some may feel that the Authorities are not taking proper steps and they are not interested in protecting the life of the citizens, and others may be thought it is highly obscene.

"So, this differs from person to person depending upon his ability to see the particular event in a particular dimension," added the Court.

"No Intention to defame the Authorities"

The Court observed that the intention of the petitioner in depicting the people in such a form could be easily understood and that he wanted to express his grief that the Authorities have to be ashamed of themselves over the inability or inaction in containing the demand of exorbitant interest by the money lenders.

"So here, the intention of the petitioner is not to defame the Authorities, but to expose gravity of the issue involved," added the Court.

"Wanted to express his angry"

Noting that what he intended was to express his anger and that it cannot be construed as an intention to indulge on abscenity or defamation.

"But the context as mentioned earlier shows that it did not contain any criminality. But Ethical questions may involve. But the Court cannot teach the ethicality to the people and it is for the Society to evolve and follow the ethical standards."

With the above observation, the Court opined that continuing the investigation against the petitioner would make no purpose and no criminality was involved in the cartoon and so, the criminal proceedings was liable to be quashed.