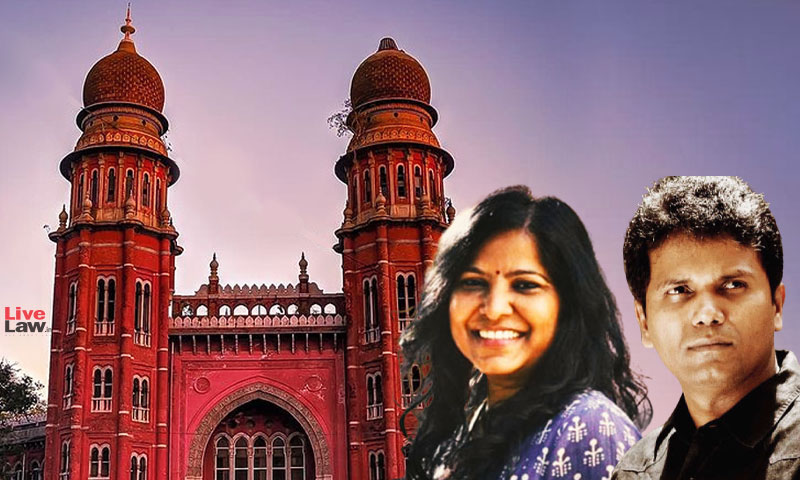 x
The Court also acceded to request for transfer of criminal defamation case from Saidapet Magistrate, subject to preference of both parties.

Madras High Court on Wednesday orally observed that the passport of filmmaker Leena Manimekalai could not have been impounded merely on the basis of a criminal defamation case pending against her. Justice M. Dhandapani has said that he will be directing the Regional Passport Office, Chennai, to release Manimekalai's passport, who is facing criminal defamation case filed by film...

Madras High Court on Wednesday orally observed that the passport of filmmaker Leena Manimekalai could not have been impounded merely on the basis of a criminal defamation case pending against her.

Justice M. Dhandapani has said that he will be directing the Regional Passport Office, Chennai, to release Manimekalai's passport, who is facing criminal defamation case filed by film director Susi Ganesan in the year 2019. The matter has been deferred by the court for pronouncement of order tomorrow.

"There is a limit for everything. You acted upon the adverse police report. Don't make hue and cry as if the petitioner has committed a huge crime", Justice Dhandapani told the counsel appearing for the Passport Office.

The court also said that it will allow a petition seeking transfer of the case from the file of Magistrate, Saidapet and instructed both the parties to decide between themselves a suitable Court.

During today's proceedings, Advocate S. Senthil Kumar appearing for the petitioner submitted that Manimekalai is ready to face trial in the criminal defamation case, filed after she levelled sexual harassment allegations against Ganesan during the #MeToo movement.

He also reminded the court about an offer that she has received to carry out research work as a part of the Master of Fine Arts (MFA) Course in Canada.

CGSC Infant Dinesh, appearing for the Regional Passport Office, took the stand that the passport was impounded based on the adverse report it had received from the Commissioner of Police, by invoking its own powers under Section 10 (3)(e) of the Passports Act and not pursuant to the  Magistrate order under Section 104 CrPC.

When he compared the instance of impounding Actress Khusboo Sundar's passport with the current instance, Justice M. Dhandapani asked:

"Do you know of Maneka Gandhi's case?"

Turning to the counsel for Susi Ganesan, the court observed that he will ask the petitioner to attend all hearings in the defamation case. He also assured the respondent that his interests will be protected, but it wouldn't be at the cost of infringing upon the personal liberty of the petitioner.

"The trial court will independently consider the defamation case and decide notwithstanding the order in this writ petition. I will ask the petitioner to cooperate. You are asking to execute a bond under Section 88 of CrPC? Your Criminal OP will be closed", noted the judge.

Upon the petitioner's submission that the Saidapet Magistrate has not followed due procedure mandated by Suresh Kumar's and Maneka Gandhi's case while impounding the passport, and that a warrant was issued against Manimekalai immediately upon her non-appearance in one instance, the High Court opined that the defamation case can be transferred if both parties concede.

"This is not a murder trial. If you win the defamation case, you will be compensated. It is not a heinous offence that she has committed, I am going to issue a direction to release the passport."

On September 9, citing the pendency of criminal proceedings against her, Leena Manimekalai's passport was impounded under Section 10(3)(e) of the Passports Act, 1967 by RPO, Chennai.

However, On 20th October, the order of Saidapet Magistrate allowing the impounding of passport by RPO was set aside by Chennai Sessions Court, which was duly informed to the Madras High Court on 22nd October.

In the order, Principal Sessions Judge R. Selvakumar held that impounding of the passport cannot be done by the court u/s 104 of CrPC, referring to the apex court judgment in Suresh Nanda v. Central Bureau of Investigation (CBI). It further observed that impounding of passport directly affects the personal liberty of the petitioner and passport can be impounded only by the passport authority after due enquiry.

On 27th October, Justice R Mahadevan enquired from the RPO, Chennai if a defamation case, which is in the nature of a 'personal dispute', can be ground for impounding passport. He also directed the parties to appear in person on November 1st to examine the possibility of resolving differences between them.

In reply, Advocate Infant Dinesh for RPO argued that Manimekalai's passport was impounded after it received intimation from the police authorities that a criminal case was pending against her; the RPO is not concerned with the gravity of the criminal offence. In doing so, the RPO was merely exercising his powers by invoking the authority's own jurisdiction under Section 10 (3) of the Passports Act and not Section 104 of the Code of Criminal Procedure, the advocate submitted further.

On 27th October, Justice R. Mahadevan said that he was prepared to dispose off the pending writ petition once the parties appearing in person are heard. Meanwhile, Susi Ganesan had also disputed the maintainability of Manimekalai's petition before High Court.

Leena Manimekalai, a renowned filmmaker, poet and artist, approached the Madras High Court by way of a writ, challenging the decision of Regional Passport Officer, Chennai to impound her passport. In 2018, when the #MeToo Movement was in the fore, Leena came forward with sexual harassment allegations against Director Susi Ganesan. A criminal defamation case was pending against the filmmaker since 2019, filed by Susi Ganesan in the Chennai Magistrate Court.

In the petition before High Court, Manimekalai, through her Advocate VS Senthil Kumar, had submitted that the impounding order was passed by completely disregarding her reply to the show cause notice issued priorly. She also contended that the passport was renewed back in 2017, and since there wasn't any criminal proceedings against her at the time of renewal, it cannot be said that the renewal was completed by suppressing material facts.

She also submitted that her research work as a part of Master of Fine Arts (Film) course in York University, Canada on full scholarship has been put on hold due to the recent incidents, referring to her passport that was impounded.

Susi Ganesan was predetermined to harass her through the criminal defamation case, and the application filed before Saidapet Magistrate seeking directions to the concerned officer for impounding passport reveals his intentions, the petitioner stated. The plea was once closed by the Magistrate, which was challenged by Ganesan before High Court, but to no avail. The petitioner argued that it was only after that the Magistrate re-examined the earlier order upon a fresh petition by Susi Ganesan and directed the passport officer to impound, which in itself was illegality.