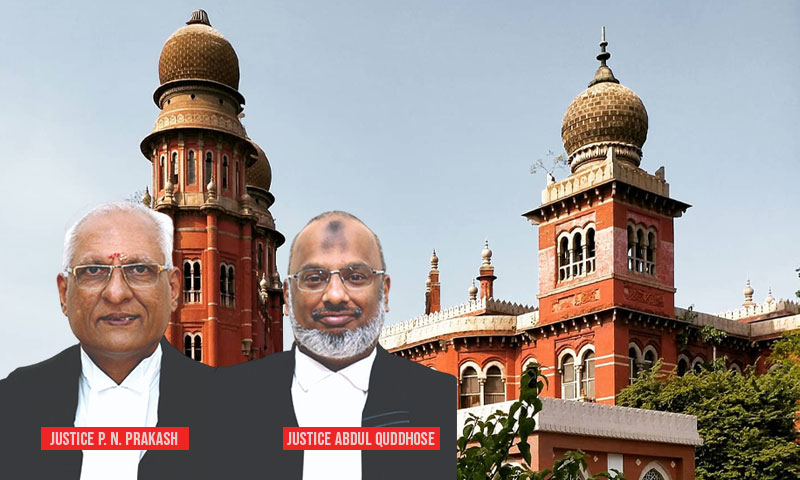 While pronouncing orders in a Suo Motu writ petition, the Madras High Court bench of Justice P.N Prakash and Justice Abdul Quddhose made a series of directions to be followed by the Motor Accident Claims Tribunals (MACT) in the state. The court also made suggestions to the Chief Justice and requests to the portfolio judges to issue appropriate directions to put in motion...

While pronouncing orders in a Suo Motu writ petition, the Madras High Court bench of Justice P.N Prakash and Justice Abdul Quddhose made a series of directions to be followed by the Motor Accident Claims Tribunals (MACT) in the state. The court also made suggestions to the Chief Justice and requests to the portfolio judges to issue appropriate directions to put in motion these suggestions.

The petition was for directing the respondents - Registrar General, Additional Registrar (Inspection) and State Bank of India to audit the motor accident cases funds in all districts, lodge criminal complaints against recalcitrant officials and monitor the investigation in the matters.

A retired staff member, Dinakaraja, in the III Additional District Court, Pattukkottai, had misappropriated a sum of Rs.1,51,30,300/- of compensation amounts in the MCOP jurisdiction, which resulted in the then Portfolio Judges viz., Justice P.N Prakash and Justice N. Seshasayee, constituting the following three Committees:

The reports submitted by the three Committees disclosed several appalling features in the system of record maintenance in the MCOP Courts in Thanjavur District which had paved the way for embezzlement.

Based on the reports of these three committees, the portfolio judges submitted a comprehensive report to the Chief Justice. It was also highlighted that the situation in other districts might also be similar and remedial measures were also suggested.

The chief justice was of the view that the issue needs to be looked into on the judicial side and set up a Special Bench with a mandate to streamline the existing practice and usher in a fool proof mechanism in the matter of disbursement of compensation amounts in the MCOP jurisdiction.

From the inputs received, the court was satisfied that practitioners in the MCOP jurisprudence operate in delineated specific turfs and would not brook encroachment by anyone.

It was also found that the practitioners were not alone in this misadventure and were assisted by court staff and sometimes even judicial officers.

The court refered to the decision of a division bench of this court in The Divisional Manager, Oriental Insurance Company, Kannur vs. Rajesh and 2 others [2016 (3) CTC 128: 2016-2-LW 561], where to protect the interests of the claimant the court directed to the Insurance Companies and Transport Corporations to make online transfer of the award amounts in the account of the MACTs prescribing a format and thereafter, directing the MACTs to transfer the award amounts online to the accounts of the claimants.

This however led to another trend where the practitioners connived with the banks and opened bank accounts in the name of the claimants. They obtained ATM cards of the claimants and withdrew money as soon as the award amount were deposited.

As these norms for opening accounts were breached even by nationalized banks, the Court deemed it proper to send a copy of the order to regulator- RBI which shall circulate it to all corporate branches of nationalized banks and seek reports. The court also directed RBI to take necessary steps to end this practice and to file a compliance report within a period of 6 months from receiving copy of the order.

The court also noted how honest judicial officers were dragged into such misdeeds. In many cases, they were falsely accused of conniving with the wrongdoers. In other situations where investigations were underway, these officers would be accused of mistreatment and harassment.

The court found the following grey areas and made necessary recommendations -

Savings Bank A/c vs. Current A/c and Accrued Interest: The court noted that there was no uniformity in opening of bank accounts by the MACTs. Many MACTs have not opened exclusive accounts for depositing the award amounts in MCOP fields alone. When amounts from various categories are deposited in Savings account, it becomes difficult to apportion the interest component to respective cases. These accrued interests are therefore handed over to the state as "lapse of deposit". The court directed the MACTs to invest the award amounts deposited by insurance companies in Fixed deposits immediately so that claimants are not prejudiced.

It was also requested that the Chief Justice issue directions to the registrar in all MACTs to include details of deposit of award amount and details of receipt and disbursement of FDRs in their monthly Institution, Disposal and Pending (IDP) statement. It was also directed that accrued interest in various banks may be transferred to respective governments.

It was noted that the matter relating to opening of Savings Bank Account or Current Account would be based on the decisions of the Supreme court in Bajaj Alliance General Insurance Co. Ltd v. Union of India and others [W.P (Civil) 534 of 2020]

Disbursement of compensation: The court highlighted that Tamil Nadu Motor Vehicles Accident Claims Tribunal (TNMVACT) Rules, 1989 which were issued to help the literates, semi-literates and minor claimants were now creating a havoc and have led to accumulation of compensation amounts in various MACTs. The court highlighted the need to revise these rules and amend them as people today are more informed than before.

Investment of amount in Fixed Deposits: During the course of investigation, it was found that award amounts were not invested in Fixed Deposits. Renewal of the Fixed Deposit Receipts had also not taken place properly. Upon direction from the bench, a massive drive was conducted to invest these amounts. Measures were also undertaken to disburse compensation amounts accumulated in courts and that were pending disposal since long ago.

Separate Bank Account: The bench also highlighted that designated MACTs (Additional District Courts and Additional Sub Courts) do not have their own bank accounts and use the account of Principal District Court and Sub Court respectively. Hence, directions are to be issued for these courts to start their own bank accounts and to avail the online account viewing facility by giving details of Presiding Officers.

Mismatch of UTR qua MCOP number: To combat the problem of mismatch of UTR-MCOP numbers, recommendations have been made to direct the Registrar General to issue circular to all MACTs to avail "V-Collect" or other similar facilities offered by the bank.

Need for a permanent audit: It was observed that the MCOP jurisdiction, being one of opulence, be under the watchful eyes of the Audit Department of the High Court. Therefore, directions are to be issued to inspect the accounts of MACTs annually.

Further, Directions may be issued that one staff member from in-house audit department shall accompany one deputationist to each district for auditing the books of accounts of the MACTs. It was also suggested that directions be issued to the In-house Audit Wing to submit their inspection report to the Portfolio Judges concerned.

Choice of bank branches: It has been observed that to follow the directions of Registrar of High court to make Fixed Deposits preferably in nationalized bank where the claimant has his account, most often deposits are made in far-flung districts. To eliminate this, it has been suggested that each tribunal may choose five nationalized banks and respective branches (including banks within court premises) and make deposits on rotational basis.

Maintenance of registers: It was noticed that Additional District Courts and Additional Sub Courts do not maintain the necessary registers on account of not having enough staff. Hence, it was recommended that these courts be directed to maintain their own bank accounts and their own registers.

Further, the bench directed that the insurance companies, transport corporations and other depositors shall make deposit of awards to the bank accounts of respective MACTs to be incorporated in the award itself together with UTR and MCOP numbers. Within 48 hours of deposit, the depositors shall send e-mails to the mail IDs of the MACTs which shall be followed by submission of proof of deposit physically. Upon deposit of award sums, the MACT shall give instructions to bank branches for investment of award sums.

The bench also directed the MACTs to ensure that the bank accounts were pre-existing before the date of claim and if not, the account is opened within the ordinary place of residence of the claimant.

The court also noted that a new dispensation under Motor Vehicles Act, 1988 read with amended Central Motor Vehicle Rules, 1989 is taking effect on and from 01.04.2022. Therefore, it was suggested that the Chief Justice issue directions to the Registrar General to address the government to make necessary amendments to the TNMVACT Rules.

The bench has adjourned the matter to decide upon the question of liability of the third respondent for its connivance or negligence.