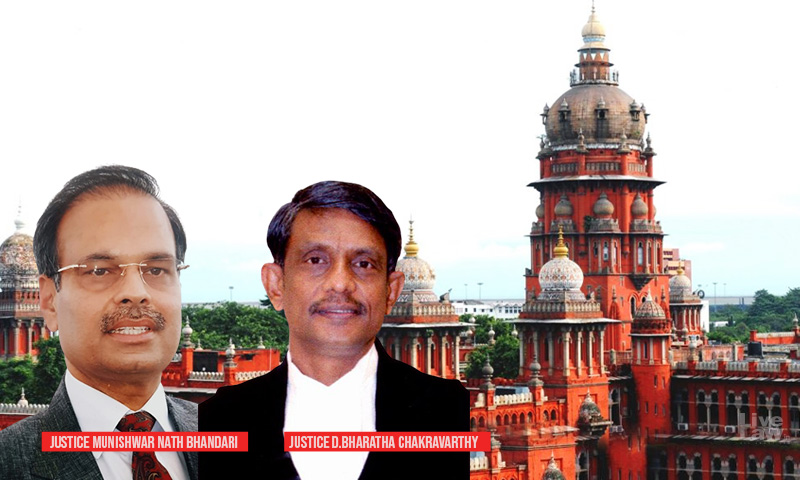 The Madras High Court recently dismissed an appeal filed by a doctor challenging the order of removal of his name from the medical register for a period of two years after observing that he had issued a fake medical certificate for wrongfully gaining property and thus had committed professional misconduct.

The bench of Chief Justice Munishwar Nath Bhandari and Justice Bharatha Chakravarthy opined that the appellant had let down all education imparted on him merely for obtaining land. This would double up the seriousness of his misconduct. The court thus opined that the punishment accorded to him was proportionate.

Now, coming to the proportionality of the punishment, this is not a case of oversight or an issue of a medical certificate to any third person by not taking adequate care. This is a certificate issued willfully knowing the true state of affairs…… When the appellant has let down all the education imparted on him by these institutions just because the real estate value of these sub-urban properties has skyrocketed beyond its worth, we feel that doubles up the seriousness of the misconduct and accordingly, we do not find that the punishment imposed is in any manner disproportionate or unduly severe on the appellant.

On knowing about the incident, the third respondent preferred a police complaint. She also preferred a complaint to the Medical Council of India to the effect that the appellant herein, in collusion with the others, had given a false and misleading Medical Certificate, certifying as if the deceased Mr.Pitchaimani was conscious and oriented and as if he is only unfit to travel from his house and which lead to the above fraudulent registration of the false document of settlement.

The complaint was forwarded to the Tamil Nadu Medical Council. Since the allegation against the appellant was a professional misconduct, the Registrar of TNMC proceeded against the appellant. Copy of complaint was forwarded to the appellant calling for an explanation. The appellant submitted that there was no evident for the allegations. He stated that he had visited the deceased multiple time when he was admitted at the Fortis Malar hospital and the patient was conscious and oriented. Therefore, after getting permission of the treating doctor and after examining the patient, he had issued the certificate.

Since his explanation was not acceptable, the matter was referred to the Disciplinary Committee. The committee had also summoned doctors at the hospital for enquiry. Based on materials on record, the committee recommended punishment for the appellant that his name be removed from the medical register for a period of two years. The committee also recommended punishment for two other doctors at the hospital also. The recommendations were confirmed by the Tamil Nadu Medical Council in its Special Business meeting.

When the order was challenged through writ petitions, the court set aside the punishment against the other doctors as principles of natural justice were violated in their case. As against the appellant, the order of punishment was confirmed.

In appeal, the appellant contended that the hospital records clearly mentioned the patient's condition as "sensorial" which would mean that he was conscious. Further, there was no requirement that only the treating doctors could alone issue the medical certificate. The procedure adopted by the committee was in violation of the principles of natural justice. The appellant also contended that the punishment was unduly harsh and grossly disproportionate considering that the appellant was a highly qualified expert.

After observing the materials, the court noted that the certificate issued by the appellant was not as per the regulations. The certificate gave false information and was in direct contravention of the Regulations. Regulation 7.1 of the Tamil Nadu Medical Council (Professions Conduct Etiquette and Ethics) Regulations, 2003 specifically mentions that violation of any Regulation is a misconduct.

This apart, from the above facts, it is clear that the action of the appellant, in issuing the certificate is clearly fraudulent and thus, fraud vitiates the actions and therefore, any plea as to the violation of principles of natural justice is only hyper-technical and without any substance. Therefore, we do not find any violation of principles of natural justice by the respondents 1 and 2.

The court was also satisfied that in view of the nature of act committed by the appellant, the punishment imposed him was proportionate. Thus, it did not warrant any interference.