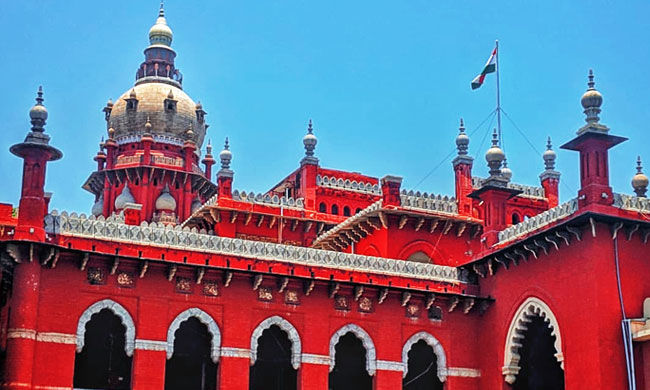 In a divorce proceeding characterised by questions on Conflict of Laws, Madras High Court has held that a suit filed for partition and separate possession of the property in India, as per Indian laws is maintainable and will not be barred by virtue of not approaching French Notary for liquidation under Article 1444 of the French Civil Code. A Division Bench of Justice T. Raja and Justice...

In a divorce proceeding characterised by questions on Conflict of Laws, Madras High Court has held that a suit filed for partition and separate possession of the property in India, as per Indian laws is maintainable and will not be barred by virtue of not approaching French Notary for liquidation under Article 1444 of the French Civil Code.

A Division Bench of Justice T. Raja and Justice D. Bharatha Chakravarty was disposing of an appeal filed by the Husband under Section 96 of C.P.C r/w under Order 41 R 1 of C.P.C against the judgment and decree by Family Court, Pudukottai.

The husband and wife, in this case, were French nationals for whom the personal law applicable would be the French Civil Code since it's Lex Patriae. This being the law of nationality of the persons who got divorced in 2005 , it would be applicable to them irrespective of where they are domiciled.

Under French Law, the marital relationship can either be based on a prenuptial contract, and in its absence, the relationship would be governed by Community regime.

By virtue of Article 1441, upon dissolution of the marriage, the community got dissolved and the parties are entitled to separation of properties, in accordance with the rules contained in Articles 1401 to 1492 of the French Civil Code.
The disputed properties are situated in Pondicherry and both the parties agreed that the schedule properties were bought during the subsistence of marriage, and thereofore forms part of the Community Property. Therefore, the High Court held that French law, i.e, French Civil Code, would be the lex causae as well which determines the rights of the parties. If the French law is considered as Lex Causae and Article 1441's application would mean that wife is entitled to 1/2 of schedule properties upon divorce and dissolution of Community Property.
The major question that arose before the court was the Lex Causae that's applicable for effecting the manner of partition. The main contention of the appellant was that Article 1444 of the French Civil Code mandates either of the parties to resort to the liquidation proceedings within three months from the date of divorce coming into force, that too, before the Notaries in France. Therefore, the appellant contended that the current suit filed by the wife, eight years after the divorce, before an Indian Court is not maintainable.
The court responded in the judgment to the above submission of the appellant in consonance with the findings of the Family Court. The court added that the manner of effecting partition is a rule of procedure, and therefore, in rules of procedure, lex fori(law of the forum) will apply.The court held that the Indian Law would be lex causae and not the French Code Civil. This would mean that Article 1444 wouldn't apply. On the above finding, the court reasoned as below:

"...As per Indian Law, only a suit for partition has to be filed and finally an Advocate Commissioner appointed by the Court in the final decree would effect the partition of the property. There is no Notaire system under lex fori. Unlike Indian Law, where there are separate enactments dealing with Substantive Law and Procedural Law, French Code Civil is a compendium of their entire Civil Law, including substantive law, procedural law, the rules of evidence, limitation etc. Article 1444 is a procedural provision and therefore would not apply", the court underscored.

On effecting the physical partition of schedule properties by metes and bounds, the court also mentioned that Lex Situs that is, the law of land where the property is situated, would apply. The High Court relied on a decision of the  Coordinate Division Bench  in the matter of Sandana Rene Lucien Joseph v. Sandana Vincent Maria Anthony (2017), wherein it was held that lex situs, i.e, the law of the land would apply when it comes to immovable properties. Therefore, the court held that suit of partition is maintainable.

"Further, the Notaires of France, also do not posses territorial jurisdiction to carry out the partition of the properties situate in India. Since all the properties were located only in Puducherry, neither party filed any proceeding before the Notaire, and rightly so. Even under French law, if the Community properties are located in other Jurisdictions, the parties will have to approach the concerned Courts as per local law and obtain property remedy(partition). Thus, the suit for partition is maintainable by the principle of renvoi also. To quote Mr. A.M. Setalvad , is also of the view that Indian Courts are likely to apply the rules of renvoi", the court added about the territorial jurisdiction of France.

"...Therefore, once again, the parties are entitled to approach for separation and the properties in the instant case, having been located in India, the respondent has rightly approached the Court of law, for partition and separate possession, as Article 1444 does not in any manner override the effect of Article 1441, resulting the ending of the community status", the court observed.

About the maintainability of the petition before family court, the trial court had previously ruled that the matter pertains to family and even though it is among the divorced couples, the Family Court had jurisdiction.

Similary, the High Court, on jurisdiction of the Indian Courts, observed that all the schedule properties are situated within the territorial jurisdiction of Pondicherry and both parties are domiciled at Pondicherry. The disagreement between the parties pertained to whether the wife should have moved the Civil Court instead of the Family Court since the prayer was for partition of the schedule properties.

"As per Section 7(1) of the Family Courts Act, 1984, a Family Court shall- (a) have and exercise all the jurisdiction exercisable by any district court or any subordinate civil court under any law for the time being in force in respect of suits and proceedings of the nature referred to in the Explanation. As per Explanation (c) a suit or proceeding between the parties to a marriage with respect to the property of the parties or of either of them would fall within the Jurisdiction of the Family Court and the Trial Court has also rightly answered the same", the court observed.

Therefore, the court confirmed the findings of trial court about plaintiff's entitlement to file a partition suit and her claim to half share of dissolved Community Property. As a result, the court concluded that the plaintiff wife is entitled to a preliminary decree of partition.

Advocate J. Kumaran appeared for the appellant whereas the respondent-wife was represented by Advocate T. Ramachandran.