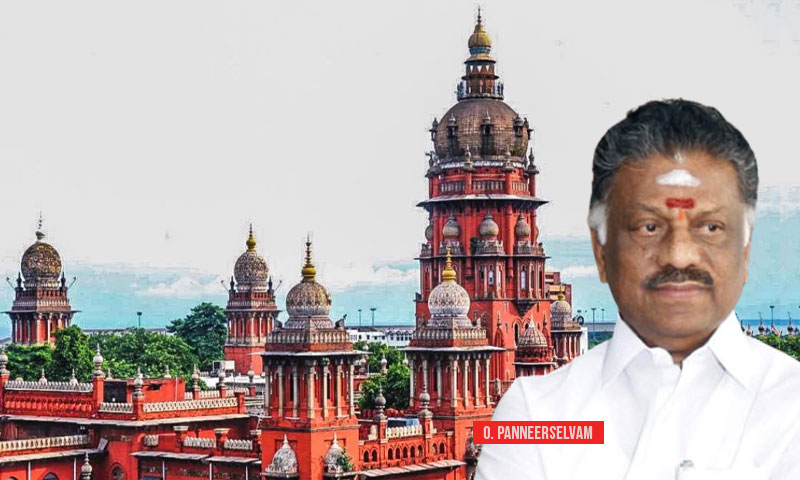 The election petition had alleged that the AIADMK Candidate and the former Chief Minister of Tamil Nadu had suppressed material facts and failed to disclose the assets and liabilities of his wife, P. Vijayalakshmi, at the time of filing the nomination papers. On these grounds, the petitioner submitted that there has been non-compliance of the provisions of Sections 33 and 33A of the Representation of People Act, 1951 (hereinafter the 'Act') r/w Rule 4A of the Conduct of Election Rules, 1961. It was also added that the election of the former CM must be cancelled since the affidavit furnished in Form 26 did not contain the full particulars that must have been there.

Justice V. Bharathidasan noted that the principles laid down in Hari Shanker Jain v. Sonia Gandhi (2001) and Ram Sukh Vs. Dinesh Aggarwal (2009) would apply in the case at hand and noted in the order that the election petition does not disclose a cause of action regarding suppression of material particulars.

Mentioning that the petitioner failed to prove the misrepresentation alleged against Panneerselvam, the court concluded as below:

One of the allegations against Panneerselvam was that the affidavit furnished was devoid of the information that his wife stood as a guarantor for M/s.Vijayanth Developers Pvt. Ltd. for the amount of Rs 27.5 crores whereas the total guarantee given in respect of properties is only marked as 12 crores in the affidavit. Vijayanth Developers Limited is owned by one of the sons of Panneerselvam, VP Jayapradeep, who borrowed the said loan. The petitioner alleged that the liability to the extent of REs 15.5 crores have been suppressed deliberately in the affidavit.

The court perused the documents including the memorandum of deposit of title deeds submitted by the respondent and disagreed with the above contention. The court concluded that the credit facilities availed by the Company by mortgaging the agricultural lands originally stood in the name of the sons themselves and the ownership was later transferred tot the mother via a gift deed. The court also marked its reasons as follows:

Senior Counsel ARL Sundaresan appeared for the current Deputy Chief of Opposition. The judge accepted the submissions made by the senior counsel against the allegation that there has been undervaluation of the agricultural properties owned by the respondent's wife to the tune of crores. The counsel acknowledged that the properties were given as a guarantee to the bank and its value has been shown as 13.5 crores and 14 crores respectively in the bank. However, the counsel refuted the contention of the petitioner that it has been undervalued in the affidavit by saying that the guarantee in the bank included the properties that stood in the name of other directors of the company as well.

A pertinent allegation against Panneerselvam was that he showed his occupation as an agriculturalist in the affidavit though he hasn't shown any agricultural income. The counsel for Panneerselvam contended that there has been no misrepresentation since the agricultural lands are owned by his wife and the income derived from therein has been shown separately by is wife.

Another allegation against Panneerselvam was that he had given the wrong survey number for his residential building which was proven wrong by the production of a certified copy of the sale deed.

There were also allegations about a specific land purchased by the wife of the respondent in Periyakulam. It was submitted that the information about residential building erected on the land was suppressed by Panneerselvam. However, the court reached a different conclusion after perusing the records. The court agreed with the contention of ARL Sundaresan that the market value was nearly 3 lakhs when the land was purchased and the affidavit correctly shows the current value as 30 lakhs which includes the variation in the value due to additional construction.

Another allegation pertained to land shown as 'vacant land' in the affidavit. However, according to the petitioner, the said land was assessed by the Municipality for property tax and submitted that this would mean that there is a residential building.

The court noted in the order as below:

"From the schedule, it could be seen that there is an old dilapidated building before her purchase, which was also assessed for property tax, and she continues to pay the tax. Merely because the first respondent's wife is paying property tax, it cannot be presumed that there is a building therein, and it cannot be held that the first respondent has suppressed the same", the court concluded.

About another allegation on suppression of the existence of five residential buildings in Thenkarai village, the court noted that they are agricultural properties with mere sheds for the sake of labourers and the storage of farm equipments. The court remarked that there are no residential buildings as such according to the sale deeds and no property tax has been levied on any of the said sheds.