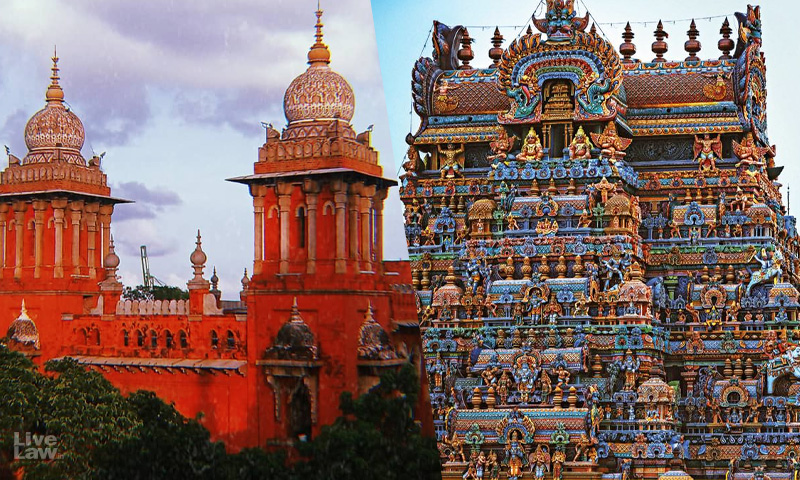 The Madras High Court recently reprimanded the growing practice of temple properties being leased out for commercial purposes which are unrelated to the objective of worship, thereby degrading the heritage value of the temples. A Bench comprising Justice T.S Sivagnanam and Justice S. Anathi observed with anguish, "The Authorities' unmindful of the heritage value of various temples...

The Madras High Court recently reprimanded the growing practice of temple properties being leased out for commercial purposes which are unrelated to the objective of worship, thereby degrading the heritage value of the temples.

"The Authorities' unmindful of the heritage value of various temples had licensed and leased out the temple property as well as the pragarams and verandas of the temples to traders to carry on trading activity by selling articles which are unrelated and unconnected with the temple and the worshipping public. These shops have virtually become shopping centres, if not, shopping malls"

The Court was hearing a PIL filed by one K. Suresh, seeking restoration of certain daily rituals at the Adhikesavan Temple as per its scriptures (Agamams) at par with the Padmanabhaswamy Temple at Thiruvananthapuram. Suresh stated that though he had sent a representation to the concerned temple authorities on March 5, 2021, no action in this regard had been taken.

The counsel for the petitioner had argued that the people of the locality hold the deity with utmost reverence and as a result they were extremely disheartened to see the temple not being maintained properly and the rituals not being performed as per the scriptures.

Taking cognisance of the grievance raised, the Court noted that despite the fire accident that had taken place at the Madurai's Meenakshi Amman temple back in 2018, the concerned authorities were yet to mend their ways. Thus, it was not only the Hindu Religious & Charitable Endowments Department (HR &CE Department) that is to be blamed for such an unfortunate state of affairs, the Court added.

"Even today, there was a writ appeal listed before us for admission, at the instance of the licensee, stating that he is entitled to continue to run a shop within the temple, rather the shop is embedded in the temple's wall. If such is the situation, obviously, the temple will be without funds and sorry state of affairs cannot be avoided. Therefore, the HR & CE Department alone is not to be blamed, but there are several persons to be blamed for such sorry state of affairs," the Court stated.

However, the Court acknowledged that it is undoubtedly the duty of the HR and CE Department to maintain the temple and preserve the heritage value of the temple for posterity. Further, the Court also agreed with the petitioner that in several temples of Tamil Nadu poojas were not being performed due to inadequate funds.

"In our considered view, there are several people who have contributed to this issue resulting in the temples being funds starved. The poojaris not being paid in time, rituals unable to be performed for lack of funds etc. The lessees of the temple are one of the main persons, who are to be blamed for the temples being left without sufficient funds. Several cases are filed before this Court by the lessees claiming that they are entitled to continue indefinitely in temple property paying a paltry sum as a rent or license fee", the Court opined.

The Court however ruled that it cannot allow the petitioner's prayer and instead directed him to approach the appropriate forum for remedy.

"If the petitioner has material with him as to how the Arulmighu Adhikesavan Temple has to be preserved, restored and maintained, he can share the details with the Authorities by way of detailed representation. So far as the relief sought for in the writ petition is concerned, this in our opinion is a civil right and if according to the petitioner, a particular sect of people have to perform that particular ritual as recorded in the Register of Agamams, then the petitioner's remedy lies else where and not by way of writ petition", the order read.